#MPKotaBeludAdvice. Incredible from Abdul Rahman Dahlan: Wake up early and use alternative routes if you want to avoid paying toll.

Urban Well-being, Housing and Local Government Minister Abdul Rahman Dahlan has advised people to ‘wake up early’ and use alternative routes if they wanted to avoid paying toll.

If you work till 8pm, get home at 9pm, and already wake up at 5.30am to leave your rented room by 6.30am for work, how much earlier can you wake up? 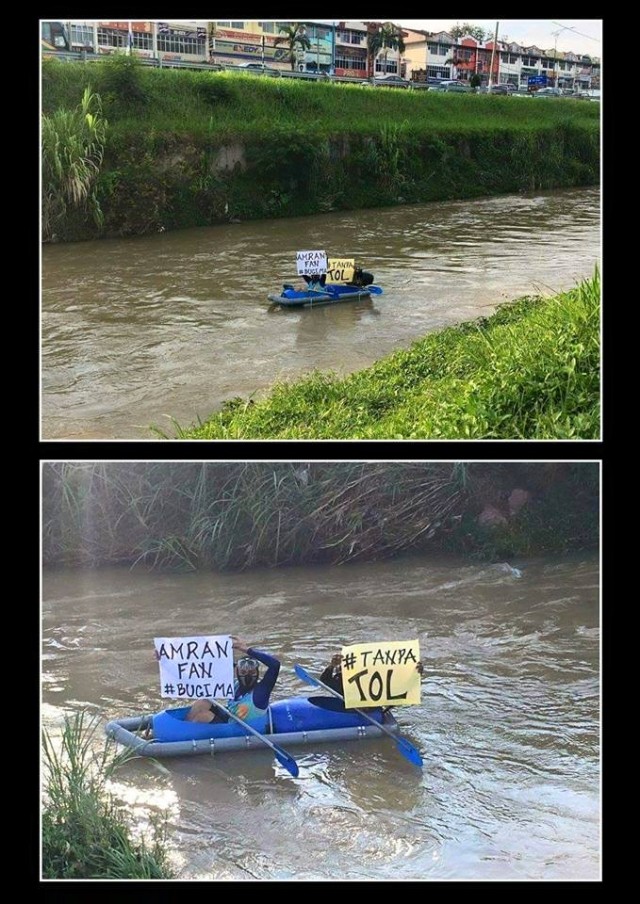 Here’s how early to get up to avoid tolls

We took @mpkotabelud‘s ‘wake early to avoid toll’ advice. See our experiment on how early: http://www.malaysiakini.com/news/318728 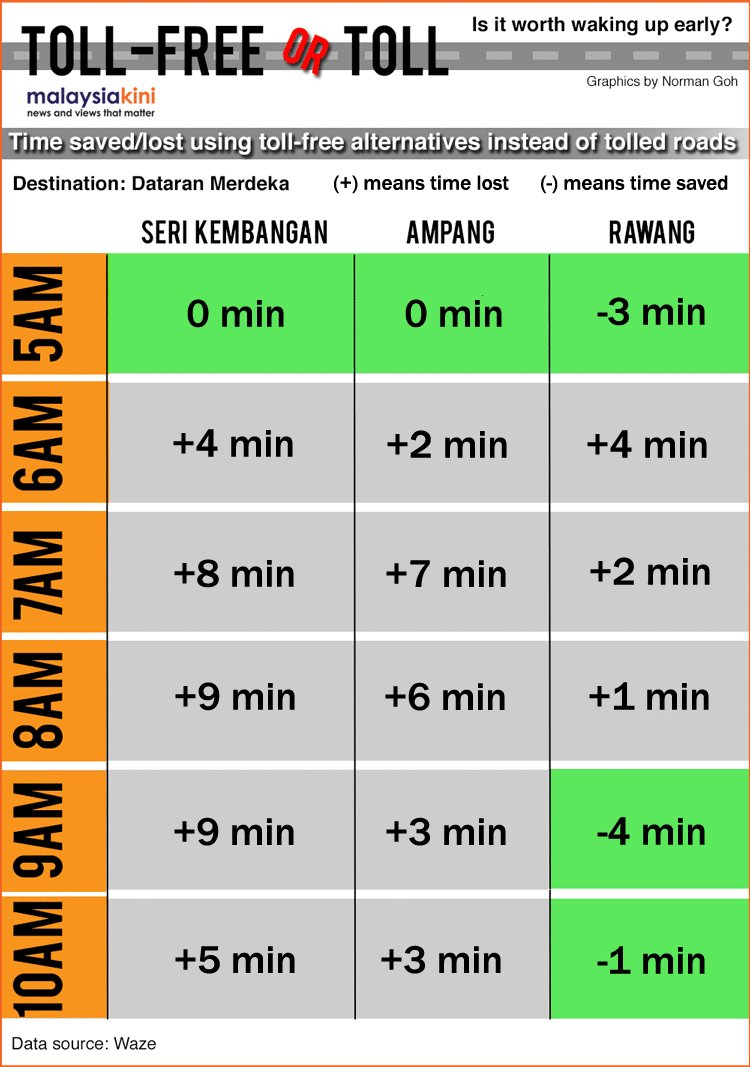 Netizens this week rained scorn on federal minister Abdul Rahman Dahlan for telling motorists to wake up early and use toll-free alternative roads – which can quickly become congested during the rush hours – if they want to avoid paying highway tolls.

Malaysiakini decided to give Rahman the benefit of the doubt by putting his advice to the test. Just how early would you need to wake up in order to use toll-free roads without having to pull your hair out?

For this test, Malaysiakini set up three hypothetical commutes, each heading towards Dataran Merdeka in the heart of Kuala Lumpur.

The three starting points were Taman Uda Jaya in Ampang, Taman Sungai Besi Indah in Seri Kembangan and Taman Bersatu, all the way in Rawang.
…

National Consumers Complaints Centre board of trustees member Muhammad Shaani Abdullah said Rawang residents are already doing what the minister advised, by leaving at dawn and going home after dark to avoid the jam.

“But is that the life recommended by the BN government?” Shaani asked.

Another Malaysian citizen sharing his token of gratitude for the great #MPKotaBeludAdvice to avoid paying for toll. 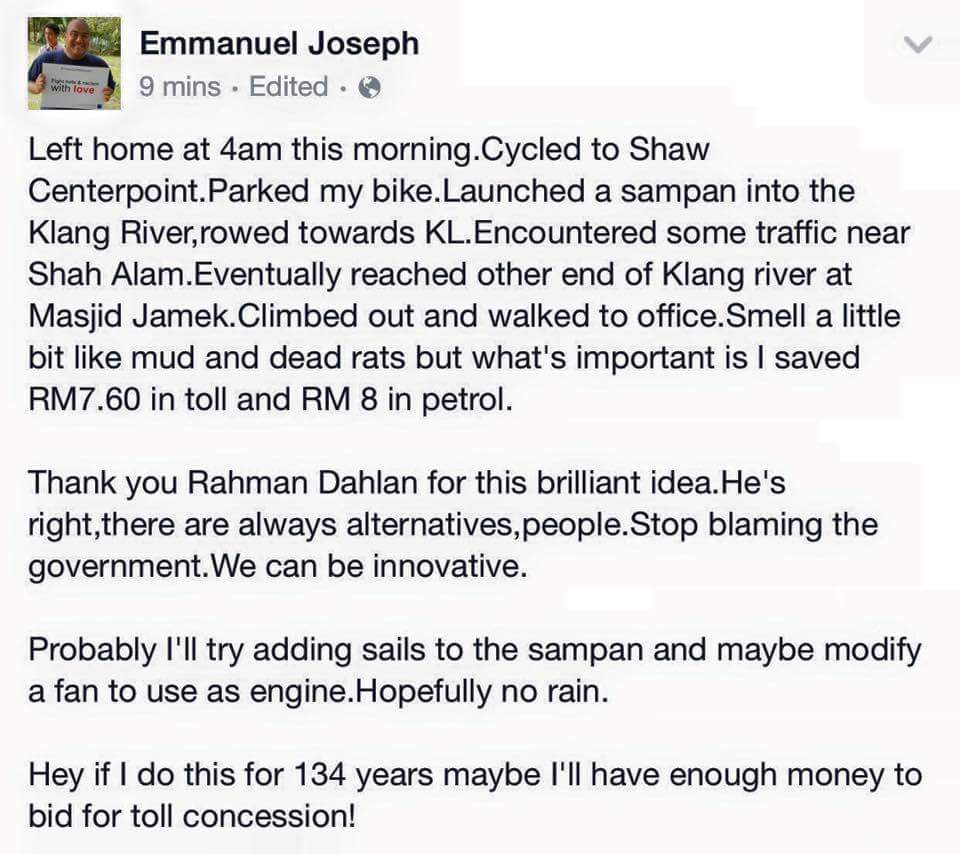 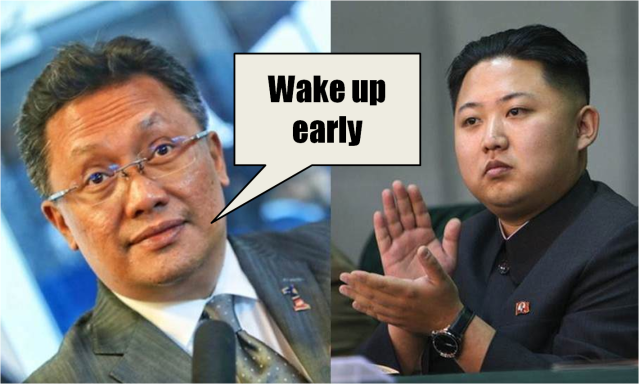 Ask your friend to wait on the other side. You reach the toll, park and drive your friend’s car. #MPKotaBeludAdvice 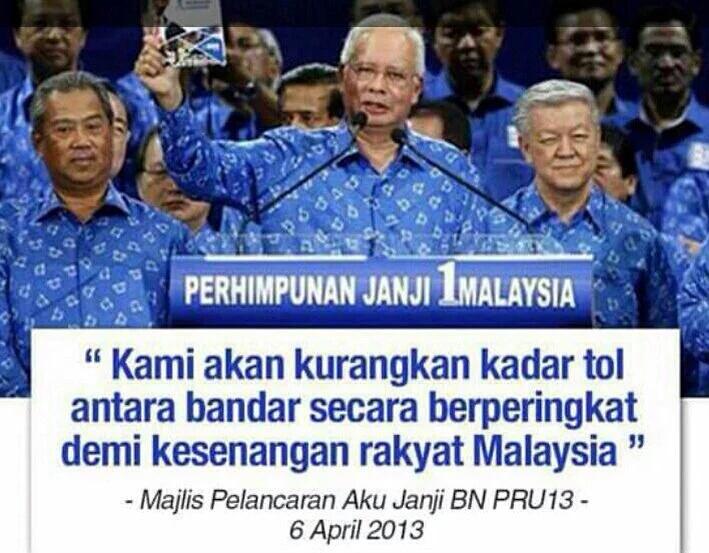 KLANG VALLEY:  Today a man who had been following Rahman Dahlan’s ingenious ‘wake up early’ road toll avoidance strategy for the past few years was shocked to discover several people he was unfamiliar with living in his home.

“I leave my house at 5AM to get on Sungai Buloh Road and use it to return after 9PM to what I thought was an empty house,” said the toll-free road enthusiast, “I’m told these people are my wife and daughter, but she needs to show me marital proof and DNA paternity tests before I’m completely convinced!”

“Ultimately, avoiding road tolls will help me afford broadband so I can spend time with my family on Skype.  It’s all about quality of life!”

@mpkotabelud please read and understand my dear minister, maybe then you will understand #MPKotaBeludAdvice 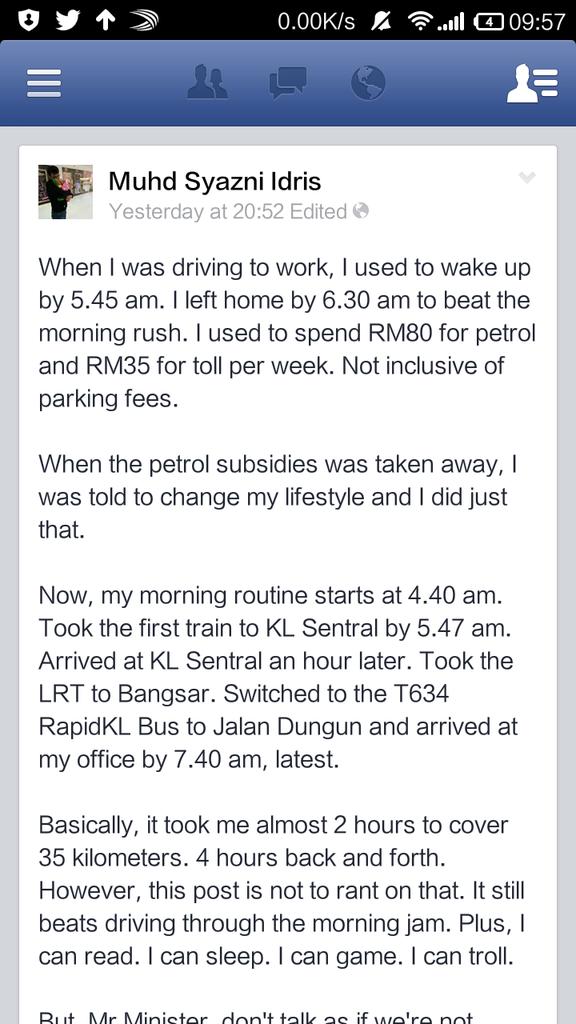 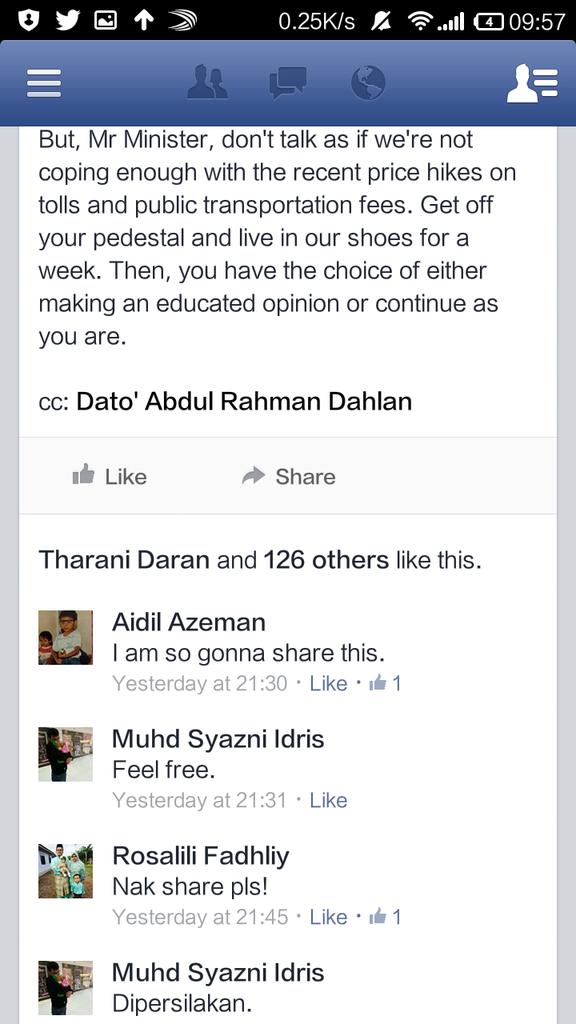 Motorists in the Klang Valley have blasted Housing and Local Government Minister Datuk Abdul Rahman Dahlan for his remarks that they should wake up early to beat the traffic rush on toll-free routes in their commutes to work if they wished to save money.

Kepong resident Yap Zhe Cheng, 23, said that it was impossible for people to wake up early just to avoid the tolls.

“What do we do when we reach the office at 6am or 7am?

“I don’t think this is right. Everyone cannot wake up together and, even if they use the toll, they will get stuck in the jam.”

Hassan Sulaiman, 53, from Taman Segambut, said it did not make any difference if motorists woke up early.

“However, if you can wake up early, then of course you can use the old road like Sungai Buloh, where there are two three routes that can reduce your expenses. Even so, that is just burdening us.”

Yong Jian Heng, 33, also from Kepong, questioned why the motorists should wake up early.

“Why does the minister want us to do wake up early? They should instead look at subsidising tolls and reducing fuel prices. 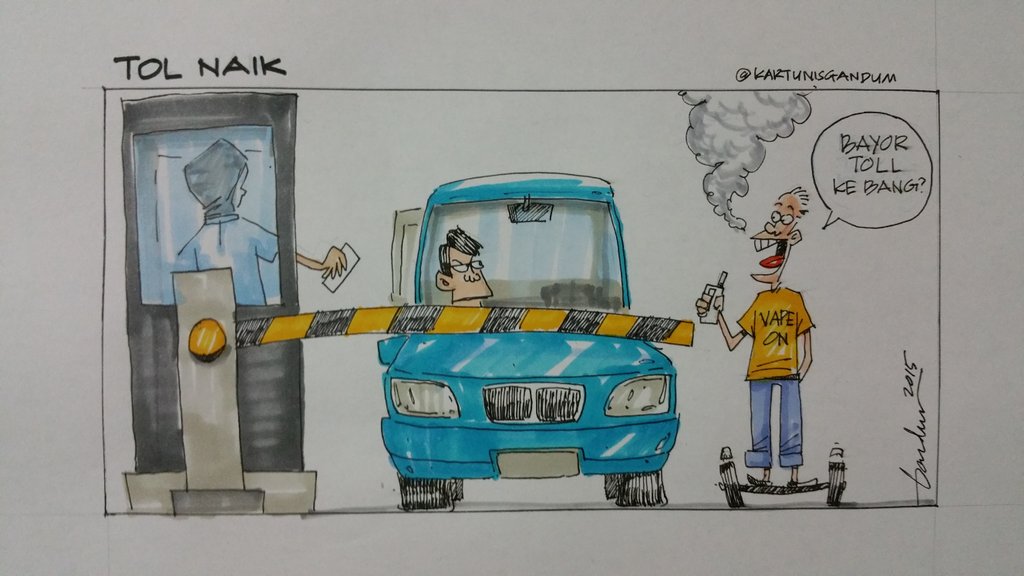 —
MY ‏@myusairi_myusof 2h2 hours ago 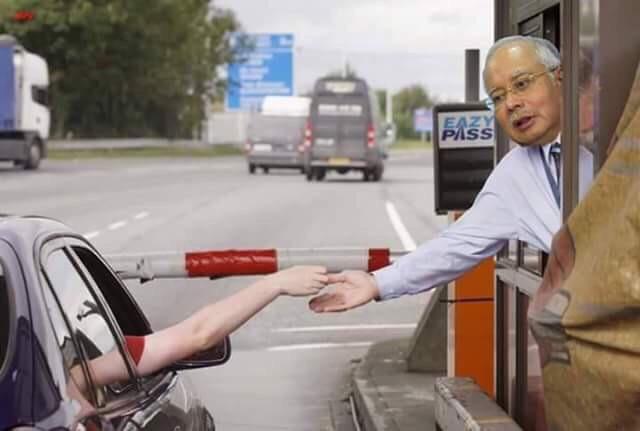 #MPKotaBeludAdvice cycle to work like our leaders in govt, we lead by example. #eh sori dreaming bah

#MPKotaBeludAdvice If you don’t want to pay toll, work from home.

can count on #MPKotaBeludAdvice to prove what a stupid dick we are paying him to represent us.

This stupidity is on a whole new level. #MPKotaBeludAdvice 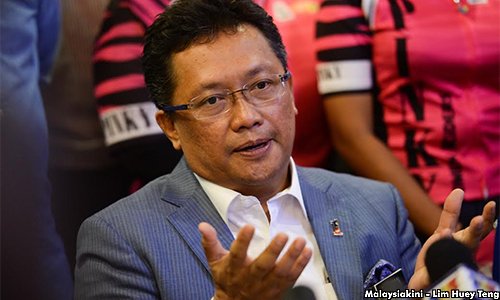 Urban Well-being, Housing and Local Government Minister Abdul Rahman Dahlan appears unfazed by the torrent of criticism he has received on social media for suggesting road users to ‘wake up early’ and use alternative routes if they wanted to avoid paying toll.

This follows toll hikes in the Klang Valley last month, with some highways hiking rates by as much as 100 percent.

The reaction to Abdul Rahman’s statement on Twitter had ranged from mild criticism to outright insults and the minister responded with equal sarcasm to snide comments using his handle @mpkotabelud.

One Twitter user, Effi Saharudin, said: “If you are annoyed with ‘go to work earlier statement’ please spam @mpkotabelud so he knows how stupid his statement is”.

Abdul Rahman took this in stride as he helped circulate the call by reproducing the tweet.

And as expected, the angry comments started coming in with one Twitter user using the handle @mashmsqxrd asking if Abdul Rahman was a twin of Ahmad Maslan.

Ahmad Maslan, now international trade and industry deputy minister, was widely mocked for his never-ending gaffes in his passionate defence of the Goods and Services Tax when he was deputy finance minister.

To this, Abdul Rahman merely replied: “No, he is better looking than me.”

3 Responses to #MPKotaBeludAdvice. Incredible from Abdul Rahman Dahlan: Wake up early and use alternative routes if you want to avoid paying toll.