The group said it made the declaration to prove it had nothing to hide, before it challenged Prime Minister Datuk Seri Najib Razak to detail the RM 2.6 billion donation he had reportedly received from a Middle Eastern donor on behalf of Umno, in the wake of the 1Malaysia Development Berhad (1MDB) controversy.

“What we are declaring today has been ratified by our financial officers,” steering committee member Masjaliza Hamzah told a press conference at the Bersih 2.0 office here.

The coalition, comprising of more than 40 rights groups, declared a RM 1.9 million surplus after spending RM664,052 expenditure for the 34-hour rally on August 29 and 30.

The group said its 2,126-page bank statement with details of the donors had been sent for auditing. About 27,000 individuals had donated to the movement.

The declaration comes just over a month following the rally.

Here is how much @bersih2 has spent out of the funds raised. See the full breakdown here: http://www.malaysiakini.com/news/314723 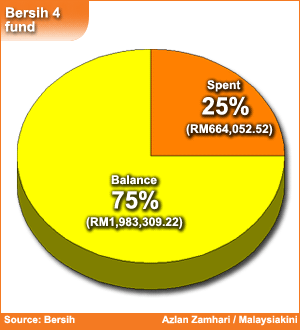 Here is the breakdown of the funds raised by @bersih2 See the full breakdown here: http://www.malaysiakini.com/news/314723 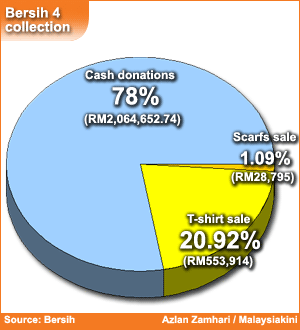 Bersih gives funds breakdown, dares PM to do the same

Electoral reform movement Bersih today revealed the breakdown of its funds raised for the Bersih 4 rally and challenged Prime Minister Najib Abdul Razak to do the same.

As for expenses, including for pre-Bersih 4 preparations and during the 34-hour rally, the movement spent a total of RM664,052.52.

In other words, approximately 25 percent of the donation received has been spent by Bersih so far.

Bersih then pledged to use the remaining balance of RM1,983,309.22 for coming activities, which includes voter education, court costs and training costs.

“(Najib), we’ve shown ours. Show us yours now,” Bersih committee member Thomas Fann said in reference to the RM2.6 billion political donation deposited into the prime minister’s personal bank accounts, which is said to have come from a Middle Eastern source.

‪#‎Bersih4‬ ACCOUNTS
We didnt answer in our police investigation as we invoke Section 112 (2) where we will only answer in court if charged.

We will answer to the public. Accounts for the rally are being prepared and hopefully audited in time for end of September or mid-October. These will be made known publicly. Hope everyone can give us some time as the amount of transactions were enormous!

Maria, who said that Bersih had so far received RM2.45 million in donations, said that an audit would be done on its accounts and they would also prepare a budget on what it was going to do with the money.

“Quite a bit will go into the rally. The rest will go for the delineation cases, voter education, voter registration as run up to the 14th general election,” she said.

1 While the donation target had been exceeded, donations were still coming in, said Maria.

2 A large portion of the expenses will be used to fund security and logistics personnel. Maria said Bersih will also use the money to fund bail and litigation costs, if necessary. 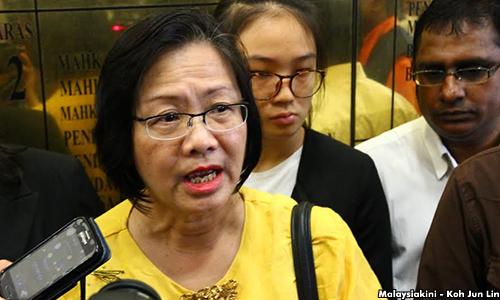 Electoral reforms pressure group Bersih, on its own volition, will make public its accounts in view of the large amount of donations it has received.

“To date, we have received over RM1.5 million in donations. This far exceeds our initial budget of RM200,000 which was based on a shoe-string estimate and our sense of economic hardship Malaysians are enduring.

“We were ready to use our reserves to cover any gap between our expenditure and donations. Also, we expected to raise more funds through our annual fund-raising dinner later this year.

“By giving so generously while suffering such economic hardship, the rakyat have overwhelmingly endorsed our call for clean elections, clean government, the right to dissent and the strengthening of our parliamentary democracy so that our economy can be saved,” she said.
…
However, a large portion of the expenses will be used to fund security and logistics personnel. Maria said Bersih will also use the money to fund bail and litigation costs, if necessary.

The Coalition for Free and Fair Elections 2.0 (BERSIH 2.0) is overwhelmed by the phenomenal show of support from Malaysians who responded to our call for donations for the BERSIH 4 peaceful assembly.

To-date we have received over one and a half million Ringgit in donations. This amount far exceeds our initial budget of two hundred thousand Ringgit which was based on shoe-string estimates and our sense of the economic hardship Malaysians are enduring. We were ready to use our reserves to cover any gap between our expenditure and donations. Also, we expected to raise more funds through our annual fund-raising dinner later this year.

By giving so generously while suffering such economic hardship, the rakyat have overwhelmingly endorsed our call for clean elections, clean government, the right to dissent and the strengthening of our parliamentary democracy so that our economy can be saved.

We will not disappoint the rakyat who have shown so much trust in us. We will be responsible, accountable and transparent. We will use the donations prudently to fund the immediate needs of the BERSIH 4 peaceful assembly as well as BERSIH 2.0’s long-term programmes.

For the BERSIH 4 peaceful assembly, the overwhelming support of the rakyat has given us more options. We are now able to lease better and more equipment than we had originally planned. Such equipment includes portable toilets, communication devices, sound systems, lighting and generator sets.  We are even evaluating the cost of leasing against the cost of purchasing.

Our immediate focus is to ensure that the BERSIH 4 peaceful assembly is a success in terms of mobilisation, communication of our messages, implementation of our programme for the 34 hours, conveniences for participants – and, most importantly, the safety and security of all.

The overwhelming support of the rakyat has made us recognize the need for us to spend more in order to reduce the inconveniences and risks to them. Therefore, the cost of organizing the BERSIH 4 peaceful assembly will now exceed our original modest estimate.

A large portion of the expenses will be used to ensure that our security personnel and logistics volunteers will be able to carry out their duties safely over the two days.  We will also fund bail money and litigation costs for participants and organizers, and provide compensation for leased equipment which may be confiscated.

We will use the remainder of the donations to fund our operational expenses, public interest litigation, publicity and our various programmes such as the re-delineation monitoring programme, the up-coming Sarawak state elections and voter education programmes throughout the country.

Thanks to the overwhelming support, we have decided not to hold our annual fundraising dinner this year.

After the BERSIH 4 peaceful assembly we will publish our accounts. We will continue to make financial decisions after collecting and reviewing the views and suggestions of members of the coalition as well as from supporters at large. We welcome all suggestions and queries and invite the public to hold us accountable and transparent.

We are pleased to express our deepest appreciation to the rakyat who have provided this overwhelming support for our struggle for a cleaner, fairer, freer and better Malaysia for all.

cc @tankengliang You talk big asking everyone 2 explain but you cant get your master to explain openly..so STFU okay

U were talking to a bunch of fools?

KLGP shut down the whole city. Why can’t they do it in Sepang?

KUALA LUMPUR, Aug 23 — Electoral reform group Bersih 2.0 will explain tomorrow how it plans to spend the RM1.4 million it succeeded in raising, exceeding its initial RM200,000 target which was earmarked for the upcoming Bersih 4 rally, a committee member said.

Bersih 2.0 steering committee member Dr Wong Chin Huat added that the group plans to uphold its principles on transparency and will fully explain its plans for using remaining funds.

“We will issue a statement in full tomorrow detailing our plans and so on because our fundraising went beyond the original target for the cause of the rally and we have a plan on what we need to do and what we plan to do with the money.

“We will definitely uphold the principle of integrity and accountability here, there’s no doubt about that,” he said during the launching of the Bersih 4 Global Countdown campaign today.

Wong confirmed that as of today, Bersih 2.0 has RM1.4 million, far surpassing its initial RM200,000 budget which was meant to fund the Bersih 4 rally.