“After The Rain” by Najwa Mahiaddin featuring JUNY: Ex DPM’s daughter sings for her father.

“After The Rain” by Najwa Mahiaddin featuring JUNY

“I believe in the power of music and its ability to heal. May this song provide comfort and strength to us all in these trying times.”

Kit Siang asks Najwa to spare a song for all Malaysians

KUALA LUMPUR, Aug 7 — Najwa Mahiaddin’s voice could do a world of good by helping Malaysians brace for the coming “storm” that the nation will face amid its fractious politics, senior DAP leader Lim Kit Siang has said.

Lim said it was commendable that the New York-based singer wrote a song in honour of her father Tan Sri Muhyiddin Yassin, who was unceremoniously removed from Cabinet early last week, but noted that there was something Najwa could sing for the greater cause of “saving Malaysia”.

“Malaysians are facing, not just the rain, but an approaching storm which may be more devastating than previous storms which the country has gone through in the past 58 years of nation-building.

“How great if Najwa could compose and sing a song dedicated to all Malaysians to prepare them for the approaching storm,” he said in a copy of his speech made at the announcement of the PAS splinter group Gerakan Harapan Baru’s Johor office bearers last night.

In announcing the release of her latest track, the singer took to her Facebook page to post the black-and-white video of it, which also features fellow singer songwriter Juny.

The song, a slow, soulful ballad, tells Malaysians to hold their heads up and promises that better days lie ahead.

“We may all fall down, but we all get up. Hold your head up, Malaysia.. after the rain comes the sun,” the lyrics read.

“When life gets cold and skies aren’t blue, you’re not alone, I’m here for you. My brothers and sisters, we’ll see you through.

“These are the times we must get through, courage and wisdom must live in you. The way of our future lies in you.

“From the rising of the sun, together we are one, we are stronger forever,” it said.

Last week when her father was removed from the federal Cabinet, Najwa reacted on Twitter with a post saying, “Allah knows best.”

Followers of her account quickly responded by with messages of support, mostly with well wishes for her father – who is also the Umno deputy president. 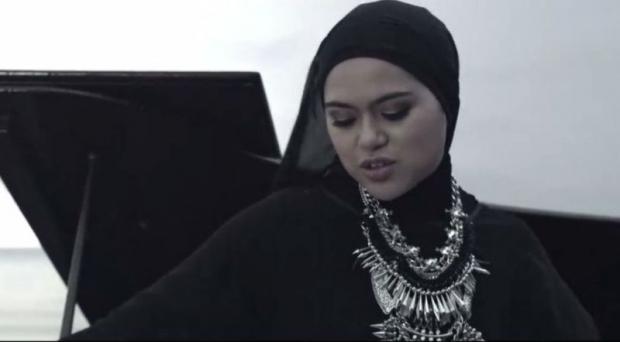 Absolute class from @najwamahiaddin After all the sorrow and lost of hope, what we all need is to held up our head.

After the rain comes the sun by Najwa http://kl.coconuts.co/2015/08/06/muhyiddin-yassins-daughter-releases-new-music-video-solidarity-all-malaysians … via @Coconutskl