Can BreadTalk® Singapore talk Singaporeans into trusting it again?

Posted on August 6, 2015 by weehingthong

We have all heard of the saying, ‘Talk is cheap’.

It takes years to build trust but just one incident to lose it.

If  “the way to a man’s heart is through his stomach”, are free pork floss buns the way to your heart, dear Singaporean? Maybe you should forgive and forget BreadTalk®’s betrayal over the soya bean milk?

BreadTalk to give away 50,000 pork floss buns after soya bean milk saga 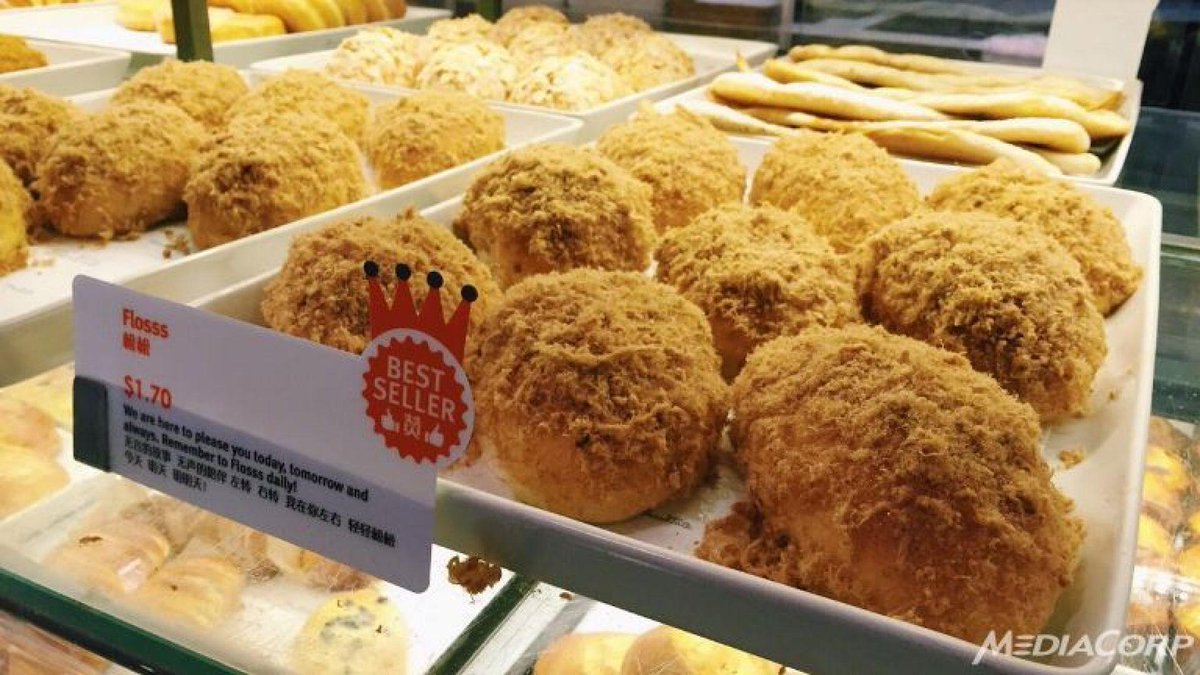 SINGAPORE — Local bakery chain BreadTalk will give away 50,000 of its pork floss buns over three weekends starting next Friday (Aug 28), in a bid to make amends after putting mislabelled soya milk up for sale.

In a joint statement with the Consumers Association of Singapore (CASE), BreadTalk said it has also donated S$50,000 to the Community Chest, and signed a Voluntary Compliance Agreement (VCA) on Tuesday.

“By signing the VCA, BreadTalk has agreed that besides ceasing its practice of selling soya bean milk in the mis-labelled bottles, it will not engage in unfair practices going forward,” the statement said.

Under siege in China?

BreadTalk has about 400 outlets in China, out of which 80 per cent are franchise outlets.

Claims of improper food handling in Shenzhen are false: BreadTalk 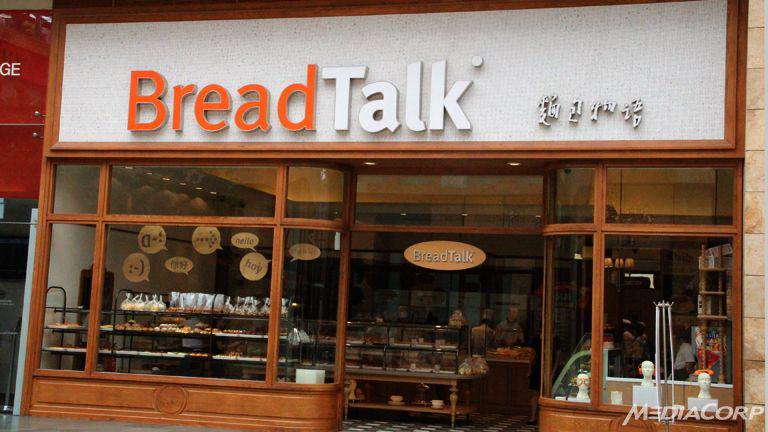 SINGAPORE: Locally-listed bakery BreadTalk has dismissed claims of improper food handling at its franchise outlet in Shenzhen, China as false.

The claims were made in an episode of Shenzhen Fazhi Shikong, a local TV programme in Shenzhen, which aired on Aug 12.

In a statement on Tuesday (Aug 18), BreadTalk said an investigation has been carried out following the report, and that officials from the China Shenzhen Quality Supervision Bureau have confirmed that food-handling practices at the franchise outlet are safe and compliant with all regulations.

“As such, we clarify that the allegations made by Shenzhen Fazhi Shikong are untrue,” said BreadTalk.

Among the allegations by the report is that BreadTalk was reusing cooking oil used to fry doughnuts, with some of the oil said to be in the system for months. BreadTalk said that “used oil is discarded each time frying oil is replaced, and the replacement of frying oil has always been conducted within the validity period”.

It added that this is regularly done to ensure that fried items retain their quality.

BreadTalk said it will take further action for any false reporting that may affect its reputation.

BreadTalk gets stern warning from Case for ‘questionable’ and ‘unacceptable’ practice

BreadTalk gets stern warning from Case for ‘questionable’ and ‘unacceptable’ practice http://bit.ly/1P9MIcF 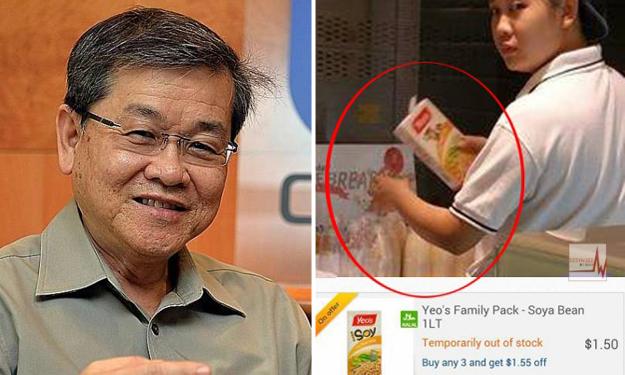 The Consumers Association of Singapore (Case) has issued a strongly-worded warning to bakery BreadTalk, informing the firm that its recent actions were in breach of the law.

It also warned the company that it would take action should such “flagrant breaches” continue.
…

The letter, sent out by the consumer watchdog yesterday, called for a meeting with the company to “discuss the matter”.

In the two-page letter, Case detailed how BreadTalk had breached the Consumer Protection (Fair Trading) Act (CPFTA). Under this Act, it is an unfair practice for BreadTalk to do or say anything to deceive or mislead a consumer, or make a false claim.

“By indicating the words ‘freshly prepared’ on the bottles, consumers may reasonably be deceived or misled to believe that the soya bean milk was freshly brewed in-house and therefore commands a higher value than Yeo’s pre-packed soya bean milk.”

“Under the CPFTA, a court may award the consumer damages in the amount of any loss or damage suffered by the consumer as a result of the said unfair practice,” he said.

BreadTalk posted a net profit of $4.9 million for 1H15, gaining 10.4 percent from than the same period last year, while revenue grew 9.6 percent to $307.3 million supported by improvements across all divisions.

The bakery division lead the growth with a 10.5 percent increase in revenue contribution to $153.8 million as the division expanded its business by 86 outlets.
…

As at 30 June 2015, the company operates 932 outlets, including franchise under the group

Communications experts: Good for BreadTalk to apologise for soya milk slip, but… http://bit.ly/1P7CSYE 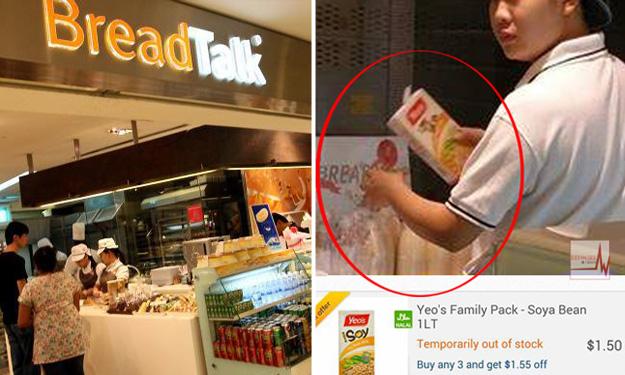 Amid a consumer backlash, bakery chain BreadTalk has come out to defend the freshness of its main products: bread, buns and cakes.
…

Communications experts agreed that admitting the mistake was a good move, but it will take some effort to regain consumers’ trust.

Veteran public-relations practitioner Cho Pei Lin said: “Admitting that they did pour Yeo’s soya milk into bottles is the best they can do. It is better than denying they did it, or clamming up.

“But what they did was so wrong that even being honest may not be enough of an apology to customers who faithfully bought their products thinking they were freshly prepared,” the managing director of media agency Asia PR Werkz added. “Customers feel cheated and betrayed by a trusted brand.”

Seshan Ramaswami, associate professor of marketing at Singapore Management University’s business school, agreed that apologising right away was a good move, but added that the wording of the apology was important.

“The words ‘misaligned presentation’ is public-relations speak and is a very awkward way of phrasing what people thought of as clear deception,” he said.

He suggested a discounted offering for a week or two, and displaying the apology as a poster in outlets for a few days.

Will BreadTalk agree to such a refund? 😛 http://fb.me/7ueAB8Ate

BREADTALK IS UNETHICAL, I DEMAND A REFUND FOR ALL THE SOYABEAN I…

I bought the soya bean juice only a few times n recommended friends to buy, I just got to know your brew is not yours but from Yeos as friends have forwarded articles extracted from the media to…

BreadTalk outlets have stopped selling the “freshly prepared” soya bean milk after admitting that the company buys the drink in one-litre packets from Yeo Hiap Seng in bulk, repackages it into bottles, seals the bottles, and then sells them.THE NEW PAPER FILE PHOTO

#BreadTalk tries to rise above scandal, experts say it will take some effort to regain trust. http://str.sg/ZnoK 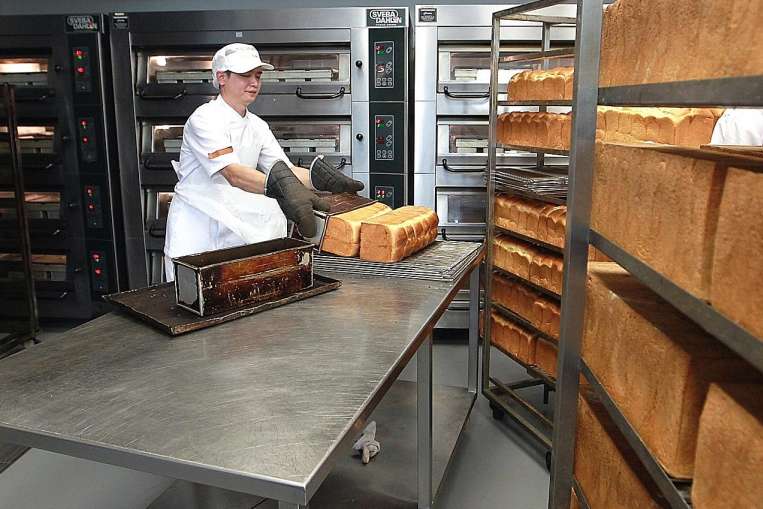 In the wake of its soya bean milk scandal, BreadTalk yesterday defended the freshness of its bread, buns and cakes. It added that buns and bread not sold at the end of the day are discounted to speed up sales. Leftover buns are distributed to staff.ST FILE PHOTO

After admitting soya bean milk is not its own, it reassures public bread items freshly made

Amid consumer backlash, bakery chain BreadTalk has come out to defend the freshness of its main products – bread, buns and cakes.

After news broke on Monday that the 46-outlet chain’s “freshly prepared” soya milk drink was in fact repackaged from Yeo’s brand soya bean milk, consumers slammed the firm online, with many questioning the freshness of its other products.

“We want customers to know that all our buns and breads are freshly baked at each outlet,” said Ms Joyce Koh, BreadTalk Group’s senior vice-president of brand development, yesterday.

“Cakes and larger loaves of bread are baked at our central kitchen daily and transported to outlets.”

She added that buns and bread not sold at the end of the day are discounted to speed up sales. Leftover buns are distributed to staff.

“We don’t sell them the next day,” she said, adding that juices are freshly squeezed at either the outlets or at the firm’s Upper Paya Lebar central kitchen. 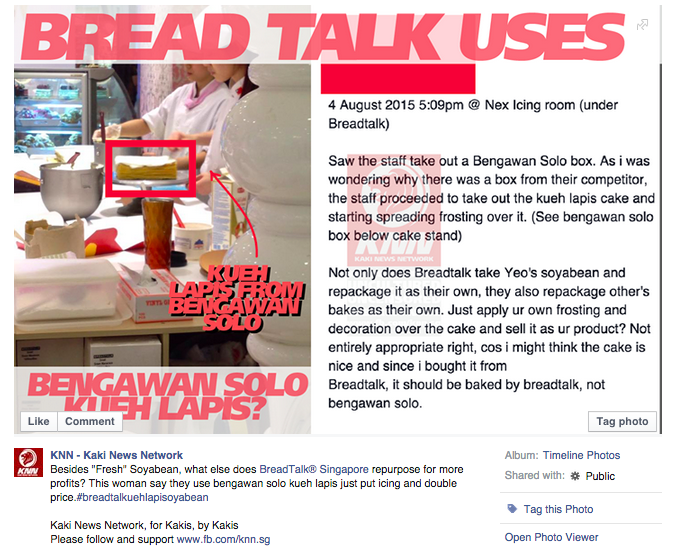 Local cake and pastry shop The Icing Room – owned by BreadTalk Group – has clarified about a cake frosting incident after a photo surfaced on Facebook on Tuesday.

The post, published on KakiNews Network’s Facebook page showed an image of The Icing Room staff spreading icing on what appears to be an Indonesian layered cake known as Kueh Lapis. The page claims that the cake was from another bakery, Bengawan Solo.

“We wish to clarify that this was an external cake purchase brought in by a staff member who had requested a co-worker to decorate the cake for personal consumption. This was clearly not a commercial transaction made with an external customer,” said the company in the comments section. 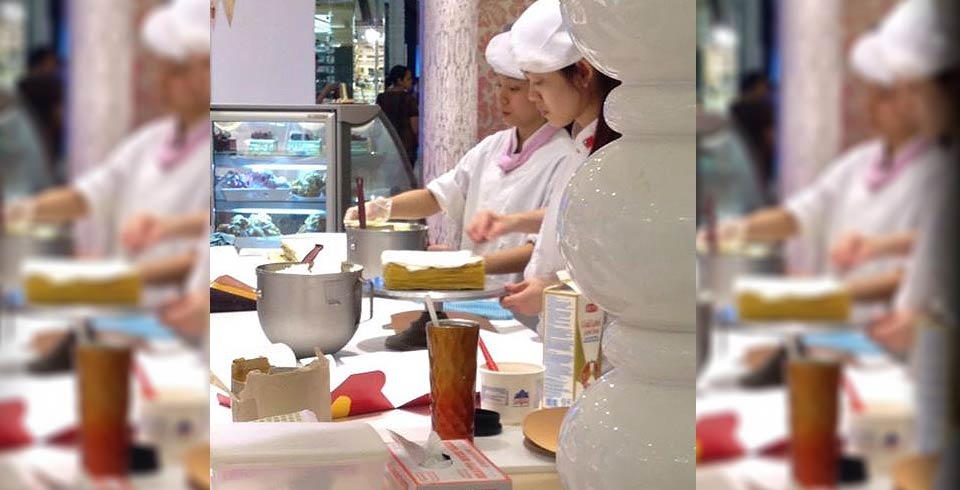 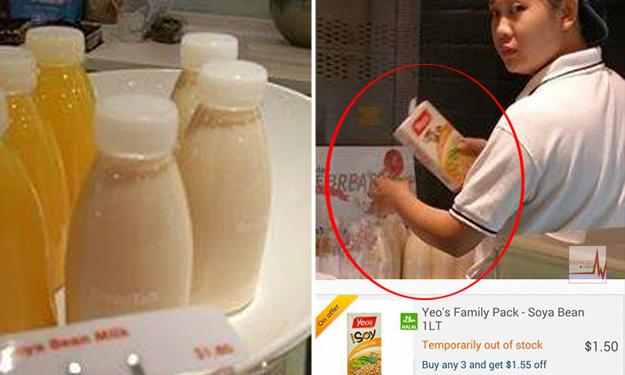 A now viral photo circulating online shows an employee from BreadTalk pouring Yeo’s packet soya bean milk into its own bottles for sale.

Stompers Yaser and Anne had alerted Stomp to the picture, after it was published on Redwire Times yesterday evening (Aug 3).

A reader known as Kev said in the article that he made a “shocking discovery” about the “supposedly ‘freshly prepared’ soya bean milk sold at BreadTalk”.

“This ‘freshly prepared’ soya bean milk from BreadTalk always tasted very familiar, but somehow I couldn’t figure out why until now.

“You see for yourself why. This BreadTalk staff is just pouring Yeo’s soya bean milk into bottles of ‘freshly prepared’ soya bean sold by BreadTalk,” wrote Kev.

He also pointed out how BreadTalk was making a profit by repackaging the drink and selling it at marked-up prices.

BreadTalk has temporarily pulled the drink from shelves

Singapore bakery chain BreadTalk has come under fire on social media after one of its employees was caught red handed repackaging Yeo’s brand soya bean milk and passing it off as their own.

A female employee was photographed filling BreadTalk bottles with the beverage, which were later sold as “freshly prepared” soya bean milk.

BreadTalk pulled the drink from shelves after the photos were published on SG Share X’s Facebook page on Monday. A packet of Yeo’s soya bean milk is sold at S$1.50 at NTUC supermarket while the the bottled drink at BreadTalk costs S$1.80.

Price mark-ups aside, some netizens have questioned the company’s integrity for advertising the soya bean milk as “freshly prepared” when it actually came from a carton.

“BreadTalk, how much do you earn by selling these soya bean milk? Disgusting and disgrace! Cheat by this way (sic),” said Lin Emily Lin on Facebook.

“Never lie to your customers. It really sucks to read this, thanks for revealing the ‘truth’,” wrote Zhenna.
…

In a statement on its Facebook page on Tuesday, BreadTalk apologised for “any wrong impressions created” and said it was never its intention to mislead customers. It added that its outlets are currently in the midst of transiting from bottle sales to its vendor’s dispensing machines to “convey greater clarity to customers”.

A photo of an employee icing a Bengawan Solo cake at an Icing Room store at NEX was also posted online on Tuesday, leading many to question if BreadTalk was also using cakes “from their competitor”.

“Saw the staff take out a Bengawan Solo box … [then] the staff proceeded to take out the kueh lapis cake and starting spreading frosting over it,” wrote Sandra Lim on her Facebook page.

“[So] not only does BreadTalk take Yeo’s soya bean [drink] and repackage it as their own, they also repackage other’s bakes as their own. Just apply your own frosting and decoration over the cake and sell it as your product? Not entirely appropriate right?”

BreadTalk has clarified that the cake belonged to an employee who brought it to be decorated.

“This is not allowed, and the staff will be reminded of that,” said BreadTalk. 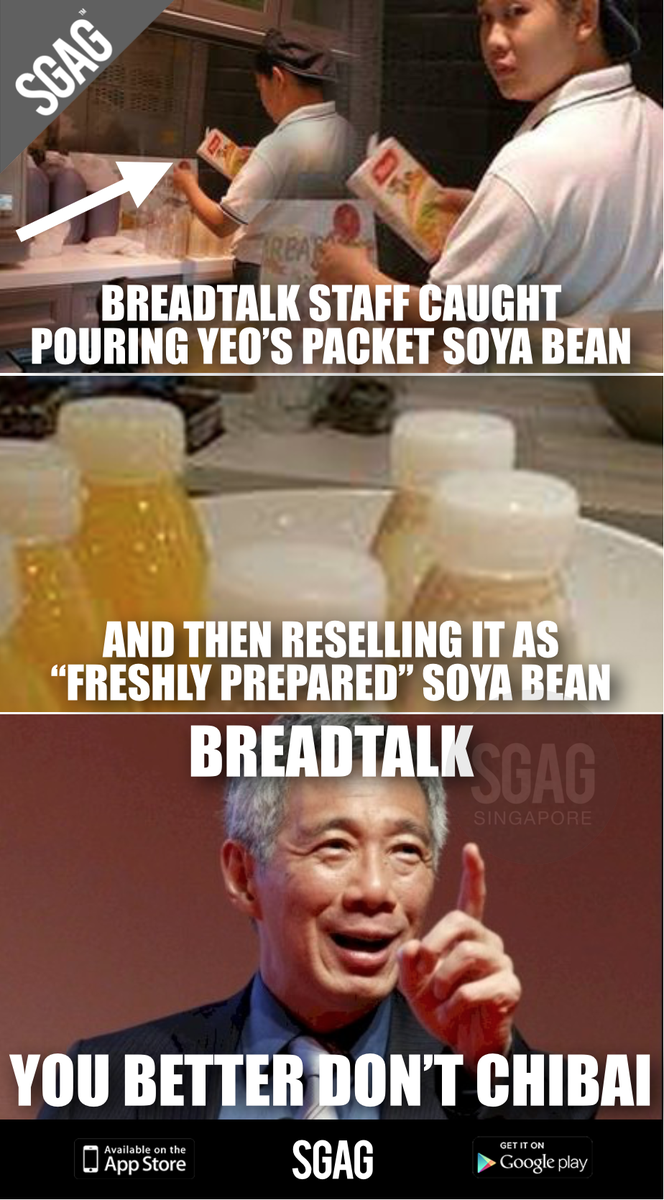