Wan Junaidi speaks of statutory rape and race: A case of mouth not engaging brain

Hey @themmailonline. Question: how does a piece from March 2014 become your most viewed story TODAY in Nov 2015? 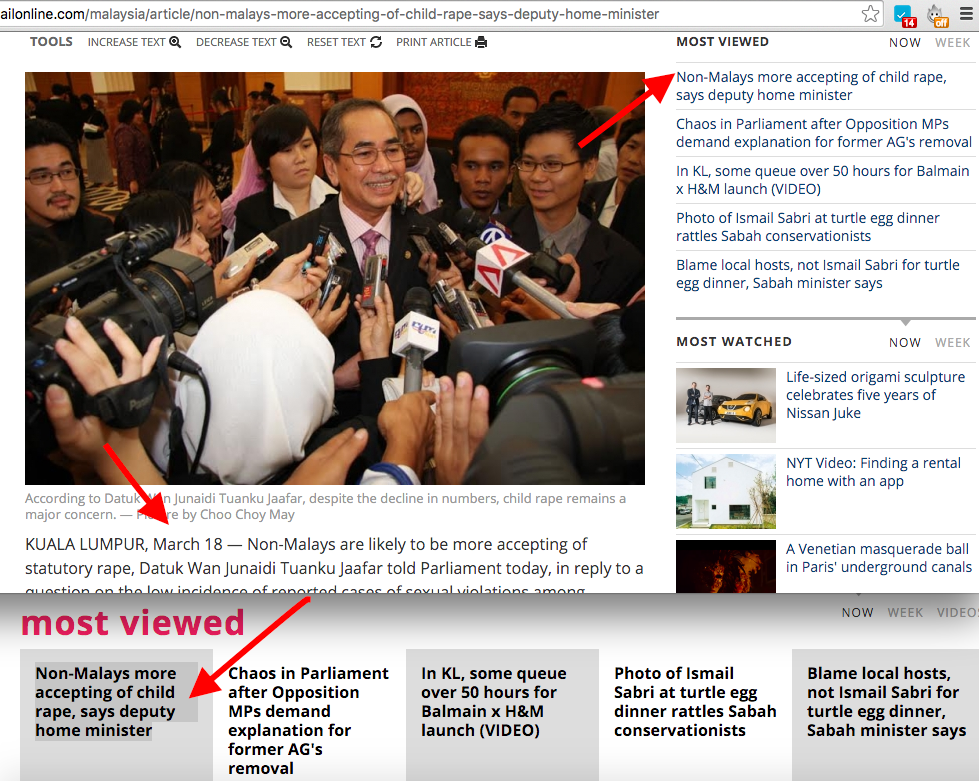 This wan junaidi prick is now also in the running for dumbass statement of the Malaysian ministers! #kalaubodohtudiamla #knnccb

Sometimes, it is better not to say anything. At least, you won’t reveal your failure to engage your brain before you speak.

This is clearly one such time.

DEPUTY HOME MINISTER, WAN JUNAIDI WAN JAAFAR, AT PARLIAMENT, SAID THAT NON-MALAYS DON’T REPORT CASES OF STATUTORY RAPE BECAUSE THEY ARE MORE TOLERANT OF THEM.

HE WANTS HIS STATEMENT EXPUNGED FROM PARLIAMENTARY RECORDS AND GETS HIS WISH BUT DOES NOT APOLOGISE.

However, despite admitting that his statement could have caused hurt if read “out of context”, Wan Junaidi did not apologise for what he had said.

“If you read the sentence on its own, out of context, maybe it can be offending,” Wan Junaidi said in Parliament today.

Speaker Pandikar Amin Mulia agreed to the request to expunge the remarks from the Hansard.
…

WHAT ELSE COULD HE SAY EXCEPT DENY HAVING SAID IT?

What Deputy Home Minister Wan Junaidi Wan Jaafar meant in Parliament on Tuesday was that non-Malays are not sensitive, thus fewer police reports are lodged on statutory rape cases.

He did not say that non-Malays are less sensitive to rape, a private secretary to Wan Junaidi, Wan Hamzah Wan Paie, said in a statement today.
…

Wan Junaidi’s exact words, as published in the Hansard, are:

“Actually, because Malays are so sensitive to cases of sex between youths, so reports had to be lodged. Others might be less sensitive to the matter so the numbers are acceptable, so what happens is more acceptable for the other parties.”

He said based on figures from the National Registration Department (NRD), the number of children born out of wedlock to underaged children between 2012 and 2013, are 1,490 for Malays and 1,836 for non-Malays.

Wan Hamzah said that he “fervently denies” that Wan Junaidi’s statement was racist.

“This statement is so insensitive, more so considering it is from a parliamentarian who is supposed to read the pulse of the people.

“Or was there another motive: To garner support from members of his own ethnic background. Such ulterior motives need to be censured,” Tharmaseelan said in a statement today.

Wan Junaidi’s statement is “disgraceful and preposterously racist”, Tharmaseelan (right) said, and expressed surprise that it did not cause an uproar in Parliament and neither did the speaker move to have it struck off the record.
…
‘Nothing to do with race, religion or culture’

He  said even doctors trained in psychology do not understand why some people sexually abuse their children and will not use race and religion to explain it.

Social workers too would not state their views on the differences in reported rape rates because it has nothing to do with race, religion or culture.

“Assigning blame to race shows the level some stoop to defend criticism, rather look for answers to resolve them.

“When such evasive and dismissive replies are given to a burning problem, it becomes pervasive within the community.

MCA hopes that Deputy Home Minister Wan Junaidi Tuanku Jaafar will reassess his statement linking race to statutory rape statistics, but said it will not insist on an apology from him.

Secretary-general Ong Ka Chuan said it was improper and inaccurate for Junaidi to say that 80 percent of such rape reports have come from Malays because non-Malays under-report such cases.

Wan Junaidi is free to give his views, Ong told reporters at the Parliament lobby today, when asked to comment.

The DAP’s Kuching MP Chong Chieng Jen had earlier told Wan Junaidi in the Dewan Rakyat to retract his “insulting” remark and apologise to all non-Malays.

Betty Teh ‏@bettyteh 6h
Just for all Wan Junaidi our deputy minister with the epic statement on statutory rape has a “PhD” which is… http://fb.me/2kwiLUFBN
…

Followed by MyConstitution and 4 others

about an hour ago

In an explanation that can be described as baffling, Deputy Home Minister Wan Junaidi Wan Jaafar believes that Malays are “more sensitive” to minors being raped as opposed to non-Malays.

According to him, this is the reason why there is a  high number of statutory rape cases reported involving Malays.

Speaking in Parliament, the deputy minister suggested that perhaps non-Malays are “more accepting” of statutory rape and thus do not lodge reports.

KUALA LUMPUR: Deputy Home Minister Wan Junaidi Tuanku Jaafar played armchair psychologist in Parliament today in an attempt to explain why statistics on statutory rape show that most of the victims are Malays.

According to him, statutory rape offends Malay sensibilities more than it does the sensibilities of other Malaysians, making it more likely for the former to report the crime.

He told the Dewan Rakyat that police recorded 1,550 reports on statutory rape in 2012, adding that Malays were victims in 1,243 of the cases. Chinese victims accounted for 73 and Indians 45. The rest were of other racial backgrounds.

“This means most Malays are sensitive to this kind of offence on teenage girls,” he said. “That’s why they lodge police reports.

“Non-Malays are probably less sensitive towards this. Probably they can accept it; so there are not much reports from them.”

3 Responses to Wan Junaidi speaks of statutory rape and race: A case of mouth not engaging brain