“Abdul Azeez is needed in the Dewan Rakyat after it was made compulsory for all government lawmakers to be present today, when the finance minister tables the Temporary Measures for Reducing The Impact of Coronavirus Disease 2019 Bill 2020 for its second reading,” Hisyam was quoted as saying by the news portal. 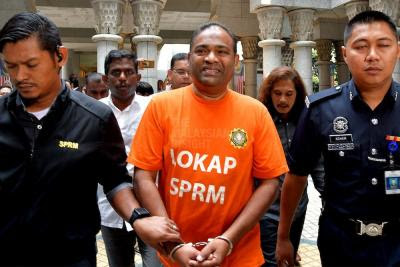 How come convicted Najib remains in his blue suit when his side-kick gets the orange and bracelets?Source: Malaysia’s Law Breaking Law Makers, Malaysian Insight

By whom were only government MPs compelled to attend Parliament today is not clear nor under what law the courts should be held hostage to such demands.

However, what is clear is that the PN backdoor government is unable to pass its finance bills unless at least six individuals who have been charged and in one case already convicted over the most monstrous thefts of public money are there to make the numbers!

DAP’s finance spokesman Tony Pua had earlier placed a question to obtain the government’s position on this awful situation where major criminals are holding the government (and thus the country) hostage to their demands – it was ‘rejected’ for discussion under Malaysia’s sad convention whereby the executive controls the order paper.

By this afternoon the same Azeez and his fellow felons were swanning through the voting lobbies of Parliament to get a finance bill through to pump money back into PN pockets.

What better illustration of the fact that Malaysia’s government (and control of the country’s cash) has been hijacked by a gang of desperate criminals who were voted out at the last election and are now seeking to reverse the consequences they face from the strings of concrete charges involving billions in looted public money?

Meanwhile, of course, the self same politicians are seeking to rally blind supporters by laying exhausted charges based on little discernible evidence against their political opponents.