Fall out from Syed Saddiq’s meeting with Cleopatra and Orange E-sports: Esports Kuala Lumpur Association (ESKL) complains over being snubbed!

This article has been updated with a response from the youth and sports minister.

Youth and Sports Minister Syed Saddiq Syed Abdul Rahman has been urged to respond to allegations about the rationale for receiving a delegation from purported e-sports company Cleo International Sdn Bhd.

In a statement today, Federal Territories PKR Youth deputy secretary Juliyus Allen alleged the company does not have a track record in the industry.

He also alleged that Cleo International’s founder was a member of Syed Saddiq’s party.

“A minister meeting a company which is less than a week old raises questions on the criteria for a business to seek co-operation with the government.

According to a report by Malay Mail, Cleo International was called Mideast Peak Sdn Bhd up until Oct 16. Mideast Peak was incorporated on December 2016.

“This situation will lead to negative perception on the ministry and is in conflict with Pakatan Harapan’s ideology,” he said.

Allen said Nur Fathiah had wrote about her entry into Bersatu on her Instagram account, in which she posted a photographer of herself thanking “Kak Nikki” for the “warm welcome to Bersatu Segambut”.

The Instagram post also included a photograph of Nurthiah with Sharifah Zohra Jabeen, who was the central figure in the “Listen, listen, listen” incident back in December 2012.

In an immediate response, Syed Saddiq wrote on Twitter that the meeting did not result in the handing out of contracts or grants to Cleo International.

Integrity is the key,” he wrote.

However, Syed Saddiq did not address Allen’s allegation regarding Cleo International’s relevance to the e-sports industry and whether the founder of the company was a Bersatu member.

I have said this before & i’ll say it again.

1)No contracts were discussed nor were there any handing out of grants. SOP must be followed. Integrity is key!

2)We have not chosen anyone as our strategic partner as alleged.

“KBS should be more discerning when choosing a strategic partner to implement govt initiatives as it involves millions of RM in hardworking taxpayers’ money.” 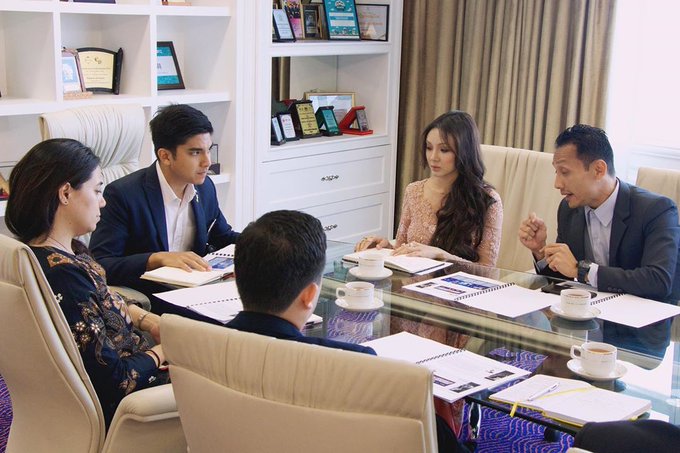 260 people are talking about this

KUALA LUMPUR, Oct 23 — An electronic sports association has criticised Syed Saddiq Abdul Rahman, for refusing to its request to meet even as the youth and sports minister recently gave audience to an upstart company and Orange E-sports.

In a statement, Esports Kuala Lumpur Association (ESKL) also alleged that they were stopped by the minister’s special officer from presenting its e-sports development plan.

“Since Esports Malaysia Association (ESM) went through a change in its administration structure and kicked out corrupt leaders and committee members, Syed Saddiq has never given his face and accepted our request to meet, including by ESKL.

“All the requests and invitations we made, it was as if they were trashed,” its president Hisham Darus said.

Hisham also urged Syed Saddiq to detail his plan, after Putrajaya announced earlier this month in the Budget a RM20 million allocation to develop the local e-sports industry in 2020.

“We at ESKL are waiting for Syed Saddiq’s office to open its doors to meet us, like how it was so easy for e-sports stakeholder companies to get a time to meet the minister,” he added.

The “transgender” label was one of the many derogatory allegations against Cleo International director Nur Fathiah Syazwana Shaharuddin, 25, who led the delegation with Esports Business Network Sdn Bhd (EBN), the owner of Orange E-sports.

Hisham later explained to Malay Mail that he was citing Syed Saddiq over the “transgender” label, and was not making the accusation himself.

Despite that, Syed Saddiq had not denied meeting Nur Fathiah nor any “transgender owner”, but instead defended her and her gender identity yesterday against such accusation, saying the woman is “a mother of two”.

Yesterday, EBN told Malay Mail it attended the meeting after it was contacted by Cleo International to pitch for “a holistic youth driven initiative that included e-sports other core youth development pillars.”

Malay Mail has contacted Nur Fathiah at her social media account to request for comments on the meeting with the ministry.