Why did the BN-implemented RM846 million (S$280.45 million) Environmental Quality Monitoring Programme (EQMP) fail in its role as an early-warning system in the Johor pollution crises?

Pakar Scieno TW Sdn Bhd was awarded the concession to operate the programme between July 2017 and January 2032 at a cost of RM846 million…this translated to about RM60 million a year, RM5 million a month, or RM167,000 a day, including both fixed and variable charges.

Wan Junaidi: EQMP to be implemented early next year

GEORGE TOWN (Malaysia) — The Energy, Science, Technology, Environment and Climate Change Ministry (MESTECC) will review the RM846 million (S$280.45 million) Environmental Quality Monitoring Programme (EQMP) after it failed in its role as an early-warning system in the Johor pollution crises earlier this year.

Malaysia’s Minister of Energy, Science, Technology, Environment and Climate Change Yeo Bee Yin said the EQMP did not alert authorities to the illegal dumping of toxic waste at Sungai Kim Kim in March, as well as in other environmental incidents.

“MESTECC has since been reviewing the performance and efficiency of the system; the legal aspects, and renegotiating the terms of agreement, with the possibility of early termination,” she said in an official response to Malay Mail regarding the EQMP.

“MESTECC has offered its full support to the anti-corruption agency’s investigation,” she said.

The EQMP is a public-private partnership project between the federal government and a private company that was signed in 2017.

Pakar Scieno TW Sdn Bhd was awarded the concession to operate the programme between July 2017 and January 2032 at a cost of RM846 million.

Ms Yeo said this translated to about RM60 million a year, RM5 million a month, or RM167,000 a day, including both fixed and variable charges.

“The hefty cost charged by the concessionaire makes up almost 30 per cent of DoE’s annual budget, depriving the department from critical expenditures on transportation, tools and most of all human development for enforcement activities,” she said, referring to the Department of Environment.

The EQMP’s aim was to provide real-time data collection for air, river and marine quality levels, as well as a command centre for analysis.

It was supposed to act as an early-warning system to prompt an immediate and proactive response to environmental incidents such as haze, oil spills, industrial disasters and illegal dumping of toxic wastes.

However, the system did not provide such early warnings for the recent incidents at Sungai Kim Kim, Kuala Koh and Sungai Kelang.

According to a DoE source, the water quality index (WQI) system under the EQMP was flawed as the monitoring stations were not strategically placed.

The stations were placed near industrial areas along rivers in Johor so most of the rivers were found to be most polluted but in Selangor, Perak and Penang, the stations were located upstream from industrial zones, so the readings would show less pollution,” he claimed.

He said there should be a more comprehensive way of taking WQI readings for rivers, especially ones that flow through industrial zones where factories tend to channel waste directly into the waterways.

“It is time the government do something about this EQMP that is not effective and yet they are getting paid so much each month,” he said.

According to news reports in 2016, then natural resources and environment minister Datuk Seri Wan Junaidi Tuanku Jaafar announced the concession agreement for the EQMP between the ministry and Pakar Scieno TW Sdn Bhd.

Mr Wan Junaidi said the EQMP will provide real-time information on the quality of air and water in the sea and rivers to act as an early-warning system that allows quick and proactive action. MALAY MAIL 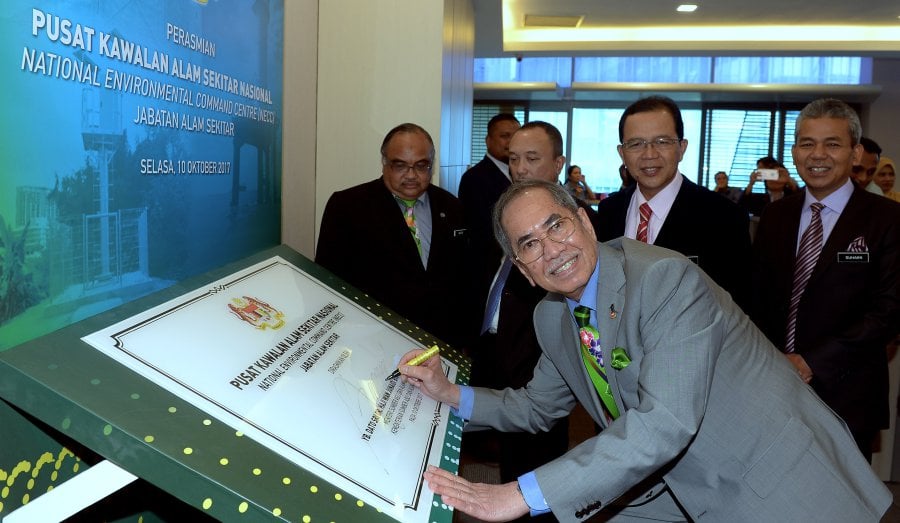 Its Minister Datuk Seri Dr Wan Junaidi Tuanku Jaafar said the EQMP, which is implemented through a concession agreement with environment expert Scieno TW Sdn Bhd, encompasses real-time based data collection for the purpose of air, river and marine monitoring as well as the establishment of the National Environmental Command Centre (NECC).

“If the old system took 30 to 40 minutes to send data to the Department of Environment, this sophisticated new system only takes 10 minutes to send us real-time data,” Wan Junaidi told reporters during the launch of the EQMP in his ministry today.

The NECC is located at the Department of Environment headquarters and will serve as a platform to analyse air, river and marine data obtained from environmental quality stations nationwide before being channeled to end users on a real-time basis.

The EQMP will be implemented by Scieno TW for a period of 14 and half years involving a cost of RM855 million.

Manual, automatic and mobile facilities have been set up for incidents of pollution and air quality status across the country.

Hailed as the most expensive project for his ministry, Wan Junaidi said the concession agreement was also signed as part of measures to improve the existing programme with regard to the country’s development and current needs.

He said besides providing information on the current status of the country’s air, river and marine quality, the programme could also be used as an early-warning system.

“EQMP will also help in developing policies and assist in making decisions for the welfare of the people and the country through the provision of enforcement activities, inputs and planning of development projects,” he said.

Like Loading...
This entry was posted in Uncategorized and tagged Pakar Scieno TW Sdn Bhd, Why did the RM846 million (S$280.45 million) Environmental Quality Monitoring Programme (EQMP) fail in its role as an early-warning system in the Johor pollution crises?. Bookmark the permalink.