Mahathir and Lim Kok Wing, “He warned if I continue I would lose my legacy.”

Do stop it @limkokwing! Where were you last year? Who was it who told Dad to shut up to ‘preserve his legacy’? If PH hadn’t won, would you have snuck into our house uninvited at Raya to apologise? Just stop it. 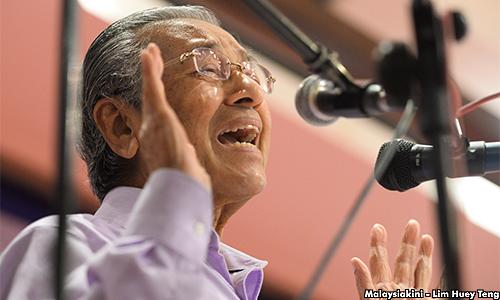 Former premier Dr Mahathir Mohamad is a firm believer that in politics, friends and foes do not last forever.

And now, he lamented that in his ongoing feud with Prime Minister Najib Abdul Razak, a close associate has crossed over to the other camp.

Though he did not mention names, it is obvious that Mahathir was referring to Lim Kok Wing, who was recently appointed as “special programme coordinator” of the prime minister.

The former premier also revealed that the PR mogul himself had previously expressed concern about Najib’s administration, and urged Mahathir to do something about it.

But his friend sang a different tune during their last meeting, where he attempted to persuade Mahathir to cease criticising Najib.

“He kept urging me not to attack the PM. I explained why I am doing so.

“But he persisted in urging me to desist from my efforts at questioning the leadership regarding the current financial scandal.

“He warned if I continue I would lose my legacy. I told him what people think of my legacy, if there is any, is not important. I am concerned of what is happening in the country. Our good reputation is being eroded.

“He repeated several times that I would lose my legacy. I really appreciated his concern. He is a friend and I felt he cared for me. We parted as friends,” he added in his blog.

‘Now I know what he meant’

But now, Mahathir said, he understands what his friend’s warning meant.

“He has been given the task of demonising me, of destroying what he calls my legacy.

“I think he and his boss believes that if I become unpopular, then my condemnation of the shenanigans involving 1MDB would be ignored by people,” he added.

Noting that his friend is now installed in the Prime Minister’s Office, Mahathir said there is now a new and more aggressive campaign to demonise him and to show how much the PM is supported by the people.

“Clearly large sums of money are being spent on this campaign. My friend is now working hard to cover up the wrongdoings of 1MDB.

“The first pages of the mainstream media now carry explanations on how the borrowed funds were spent. They add up neatly to RM42 billion.

“Before, criticisms were just ignored. A policy of elegant silence was followed. Now Najib has been advised to answer to explain. However, he lost an opportunity to explain when he did not turn up for the ‘Nothing to Hide’ forum,” he added.

However, Mahathir said his friend is faced with a daunting task in defending 1MDB and reiterated his grouses regarding the firm.

“My ex-friend will have to do better at demonising me if he is to earn titles etc,” he added.

Mahathir also revealed how he had helped his friend when he was the prime minister, but pointed out that it was not with money or jobs.

“But by smoothening the bureaucratic processes in the way of his projects. As a result, he became a very successful educationist and was able to expand overseas.

“I regarded my help as essential as the bureaucrats can be unnecessarily dilatory or even obstructive. I do this for everyone and they are all very grateful. My friend was especially grateful,” he added.

Like Loading...
This entry was posted in Uncategorized and tagged lim kok wing, marina mahathir. Bookmark the permalink.