MCA attacks DAP’s ‘Superman’ for being vulgar and crude..

The BN cyber-troopers who keep ‘shitting’ on my Facebook Page

PETALING JAYA: PKR vice-president Shamsul Iskandar has warned his fellow politicians that they need to “choose their words” carefully following a supposedly racist remark by DAP leader Hew Kuan Yau.
.
“Politicians are often misquoted or have their statements twisted, so they need to choose their words carefully.
.
“There is no need for disrespectful language.
.
“Hew should have known better that what he said would be recorded,” he said.
.
Shamsul’s comment comes after Hew was roundly slammed over his Sarawak election campaign speech on video, in which he had asked Sarawak’s Chinese voters to vote for DAP’s Batu Kitang candidate, Abdul Aziz Isa, to “screw” the Malays. 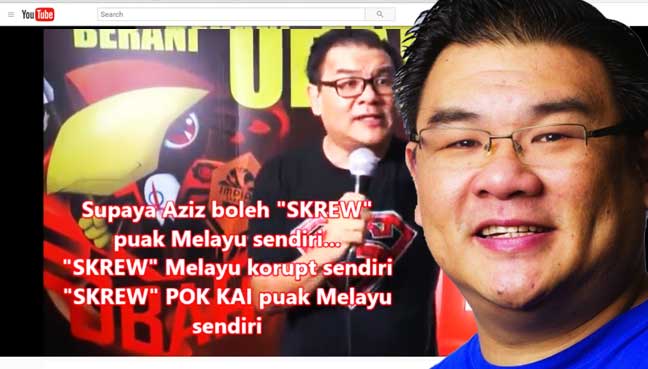 DAP firebrand claims subtitles to his speech were distorted by Umno cybertroopers and claims he was only attacking Sarawak’s PBB and not the Malays.

PETALING JAYA: DAP’s “Superman” Hew Kuan Yau has accused Umno “cybertroopers” of distorting the subtitles of a speech he made in Mandarin to make him look like a racist.

In a Facebook posting today, the DAP firebrand said he had nowhere in his speech, asked Sarawak Chinese voters to vote for the party’s Batu Kitang candidate, Abdul Aziz Isa, to “screw” the Malays.

He said he was only referring to the “corrupt” PBB (Sarawak’s anchor party) and not the Malays.

“Umno cybertroopers had purposely twisted my speech in Mandarin in the video on YouTube, with incorrect subtitles. They switched ‘PBB’ with ‘Malays’.

“I’m not anti-Malay. I was just attacking the corrupt PBB.”

Hew said if he was indeed anti-Malay as claimed, he would not have asked voters to vote for Abdul Aziz – a Malay – over BN and PKR Chinese candidates.
…

He said in his full-length video, he had also appealed to the voters in Simanggang to support DAP’s Dayak candidate Leon Jimat Donald and rejected the independent candidate, a Chinese.

“DAP is a party which fights for all Malaysians. I am a Malaysian and my spirit is Malaysia. It is MCA, Umno and the other BN component parties which play racial politics.

“MCA is conspiring with a ‘political opportunist’, who has masterminded this attack against me.”

Hew is popularly known as Superman for his penchant for wearing shirts with the superhero’s logo.

Hew, who is known as ‘superman’ among his supporters, courted flak over his Mandarin-language speech urging voters to back DAP candidate for the Batu Kitang seat Abdul Aziz Isa.

In the speech, telecast via Skype, Hew said Abdul Aziz should be elected to the state assembly so that he could “screw the Malays, that are big politicians who are corrupt, screw pok kai Parti Bersatu Bumipuera. This is the most interesting scene. Those who agree, please clap.”

These remarks drew flak from both MCA and Gerakan.

However, Hew argued that he would not have asked the voters to back a Malay candidate if he was racist.

Vulgar, but not racist: Kit Siang reacts to ‘superman’ saga

Lim Kit Siang has lambasted a DAP firebrand over his choice of words during a speech in the run-up to the Sarawak state election last week.

However, the DAP veteran denied the remarks were racist as alleged by Hew Kuan Yew’s critics.

Speaking to Malaysiakini, Lim argued that racist statements were against DAP’s principles, and Hew would have used the same analogy regardless of race.

“But the language, which he used against the corrupt regardless of race, is crude, vulgar and insensitive which I do not approve of.

“Hew should rise above such ‘gutter’ language and stop such crude and vulgar lingo,” he said.

MCA has criticised DAP for playing the race card in the run-up to the Sarawak state election, which it described as appalling politics.

Ti Lian Ker was responding to a video of DAP’s Hew Kuan Yau, who is known among his supporters as ‘Superman’ for regularly donning a T-shirt of the comic book hero.

During the campaign for the Sarawak election, Hew, in a ceramah over Skype, had urged Chinese voters in Batu Kitang to back DAP’s candidate Abdul Aziz Isa.

“This would be a good show for us to watch, don’t you agree?” he asked the audience in the Chinese language speech.

An excerpt of the video has been circulating on social media, drawing flak from netizens. It was first uploaded by blogger Raja Petra Kamaruddin. The full video was posted on Hew’s Facebook.