Not guilty as he was amok: Doctor who desecrated Hindu temple in Ipoh..

Medical graduate acquitted of damaging statues of deities in Ipoh

A medical graduate charged with damaging statues of Hindu deities at the Sree Muneeswaran Amman Kovil Temple in Ipoh last April was acquitted after he was found to be mentally unsound when committing the act.

Sessions Court Judge Ikmal Hishan Mohd Tajuddin in his judgment said it was clearly proven that the accused Fathi Munzir Nadzri, 29, committed the offence, but a psychiatrist confirmed that he was suffering from Bipolar Affective Disorder with Psychotic Features Manic Phase.

“Yes, he did it, but on the balance of probabilities, he was found to have done it while he was in an unstable state of mind and did not know that he was committing an offence.

The court also acquitted and discharged Fathi Munzir on the charge of possessing a machete on the same date and place.

“On the possession of the machete, several doubts were raised including the testimony of the main witness who said he saw the accused carrying something like a rod and not a machete, and that the seized weapon was not checked for fingerprints,” he said. 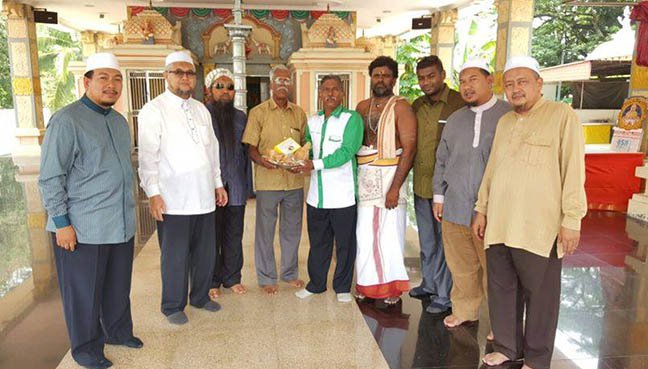 PETALING JAYA: Religious differences took a backseat and tolerance reigned supreme when a group of Perak PAS leaders visited a Hindu temple desecrated by a man, believed to be mentally unstable, last month.

According to an article in Harakahdaily.net, the group, led by Perak PAS commissioner Razman Zakaria, met the management of the Muneeswarar Amman temple in Jalan Hospital, Ipoh, yesterday.

The aim of the meeting was to seek clarification over the vandalism and show that they empathised, despite the differences in religion and culture.

“Islam teaches its followers to respect other religions, and to never insult others’ faith.

“The vandalism incident should not be allowed to be blown up into a crisis, which can jeopardise the harmony between the races. We leave it to the authorities to settle the case and take appropriate action against the culprit,” Razman was quoted as saying.

“PAS respects other religions and Islam does not allow the desecration of houses of worship under any circumstances, even during war.”

Also present at the temple on behalf of PAS were the deputy commissioner Muhammad Ismi Mat Taib and several other senior state party leaders. 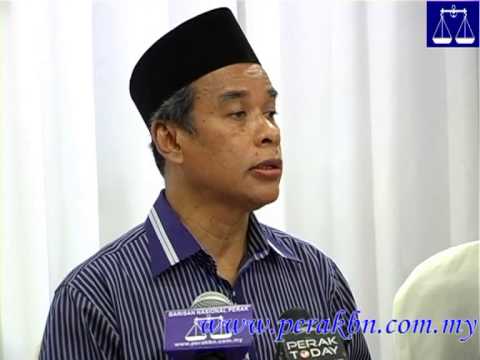 Fathi Munzir Nadzri pleads not guilty to charges of desecrating statues at a Hindu temple.

IPOH: A houseman was charged today in the Sessions Court here with desecrating statues at a Hindu temple last Sunday and possessing a dangerous weapon.

Fathi Munzir Nadzri, 29, pleaded not guilty to the charges that were read out to him by the court interpreter before Judge Ikmal Hishan Mohd Tajuddin.

He is alleged to have damaged the statues at the Sree Muneeswaran Amman Temple in Jalan Hospital about 5pm on that day.
…

Ikmal Hisham allowed an application by head of the Perak Prosecution Unit Yusaini Amer Abdul Karim for Fathi Munzir to be sent to Hospital Bahagia in Tanjung Rambutan for observation and a month-long treatment with the provision for extension if necessary.

The judge also allowed the accused bail of RM8,000 in one surety and set May 30 for mention.

Suspect in Perak temple vandalism case to be charged

The man suspected of desecrating a Hindu temple in Ipoh by smashing several idols is slated to be charged in the Ipoh Magistrate’s Court today, under Section 295 of the Penal Code and Section 6 of the Corrosives, Explosives and Dangerous Weapons Act.

“Police have completed investigations into the smashing of idols case at Kuil Sri Muniswarer on April 24 at 5 in the evening,” Perak police chief Abd Rahim Hanafi said in a statement.

However, the suspect, who worked as an intern at a government hospital in Ipoh, is not known to have suffered from any mental disorder, according to Health Ministry deputy director-general Dr S Jeyaindran, as reported by The Malay Mail.

This is despite state health committee chairperson Dr Mah Hang Soon and inspector-general of police Khalid Abu Bakar saying that the suspect suffered from a mental condition.

“I am not sure where they obtained the information from, but the Health Ministry is not aware of it.

“Since he has been sent to Hospital Bahagia Ulu Kinta for mental assessment, let’s wait for the psychiatrist’s diagnosis.

“The ministry has also not received any complaint against him during his internship,” Jeyaindran said.

He added that the suspect was an intern houseman at the Raja Permaisuri Bainun Hospital in Ipoh, starting April 11, but had resigned 11 days later.

This was two days before he allegedly desecrated the temple.

The ministry will also investigative why the suspect resigned as an intern, he said.

“We would like to know why he gave up his internship with a 24-hour notice. We also want to know how he fared during his 11 days of internship.

“The ministry cannot take action against him because he is no longer our staff, since he resigned on April 22. That is why the internal inquiry is not meant to adjudicate him but only to help us find out what happened,” Jeyaindran added.

Perak Health Department director Dr Juita Ghazalie also dismissed claims that the suspect refused to treat women patients, according to a report in The Malay Mail.

MIC Youth: Court, not cops should decide on mental state of suspects

MIC Youth has expressed dissatisfaction over the manner in which the police handled a case of a Hindu temple being vandalised in Ipoh over the weekend.

The wing’s secretary Arvind Krishnan said it is not for the police to send the suspect involved to Hospital Bahagia, which treats those with mental disorders

A coalition of Malaysian Indian NGOs has expressed disappointment over inspector-general of police Khalid Abu Bakar’s explanation that the man responsible behind the temple vandalism incident in Ipoh is mentally unstable.

“We are disappointed in the IGP. I didn’t know since when the IGP became a doctor – a specialist who can declare that a person is sick or otherwise,” Pertubuhan Rapat Malaysia (Rapat) president A Rajaretinam said at a press conference in Kuala Lumpur last night.

KUALA LUMPUR, April 25 ― The Hindu Rights Action Force (Hindraf) has called for the police to conduct a thorough investigation on yesterday’s attack on a Hindu temple in Ipoh.

The Indian group’s chairman P. Waytha Moorthy urged the police not to take the incident lightly and to look into possibilities ― including checking if the mentally ill suspect, purportedly responsible for the vandalism of the temple was linked to a terror group.

“Hindraf urges the IGP not to brush aside this incident as an act of a person who is suffering from mental disorder.

“It is paramount the police record statements and investigate all parties including the family members of the suspect, the hospital he was attached to and his ex-colleagues and his travel patterns to get to the bottom of the truth,” he said in a statement.

A crowd is seen in front of the Sree Muneeswarar Amman Temple along Jalan Hospital in Ipoh, April 24, 2016. — Pic by Farhan Najib

IPOH, April 25 — The Perak government is to provide RM30,000 to a Hindu temple here to restore idols damaged in an incident yesterday, as well as for a religious ceremony.

Dr Mah said the state government strongly criticised the act and the police were conducting an investigation into the case.

“It is important that we maintain peace and harmony in the state,” he told reporters after a visit to the temple today.

Dr Mah dismissed a claim that the man was a staff of the Health Ministry.

“The suspect resigned on April 22 by tendering a 24-hour notice. He had only worked for five days.

“Effectively, he had rejected the offer, and he is not a member of the Health Ministry,” he said. — Bernama

Inspector-general of police Khalid Abu Bakar has urged the Hindu community in Ipoh, Perak, to remain calm and refrain from inciting conflict after a temple was vandalised.

Khalid said this was because the suspect is mentally unstable and has been sent for treatment at Hospital Bahagia, Tanjung Rambutan.

The smashing of idols at a Hindu temple here yesterday is neither a racial issue nor associated with the Daesh militant group, according to the police.

A man believed to be of unsound mind had committed the act at the Sree Muneeswarar Amman Temple in Jalan Hospital, said Perak CPO Datuk Seri Abdul Rahim Hanafi.

An investigation showed that the 29-year-old man, who had studied abroad, was under psychiatric treatment and did not have any criminal record, he said after the monthly assembly at the Perak Police headquarters here today.

Abdul Rahim said the man would be taken to Hospital Bahagia in Tanjung Rambutan today for a medical examination.

He warned the people against manipulating the incident into a social media viral issue, saying the police did not want any undermining of public order in Perak. 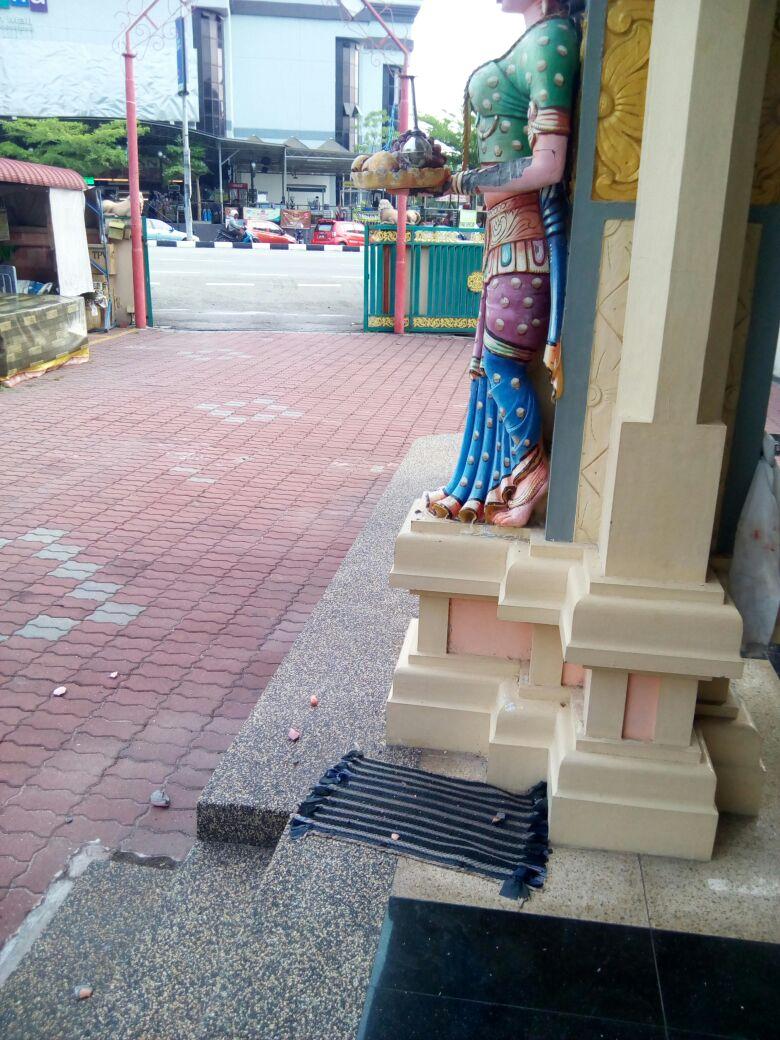 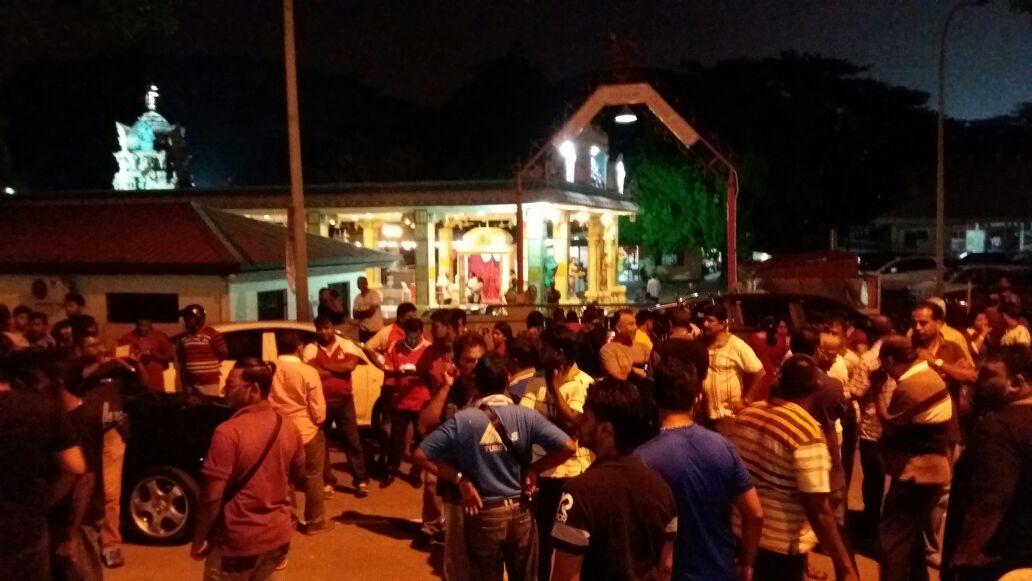 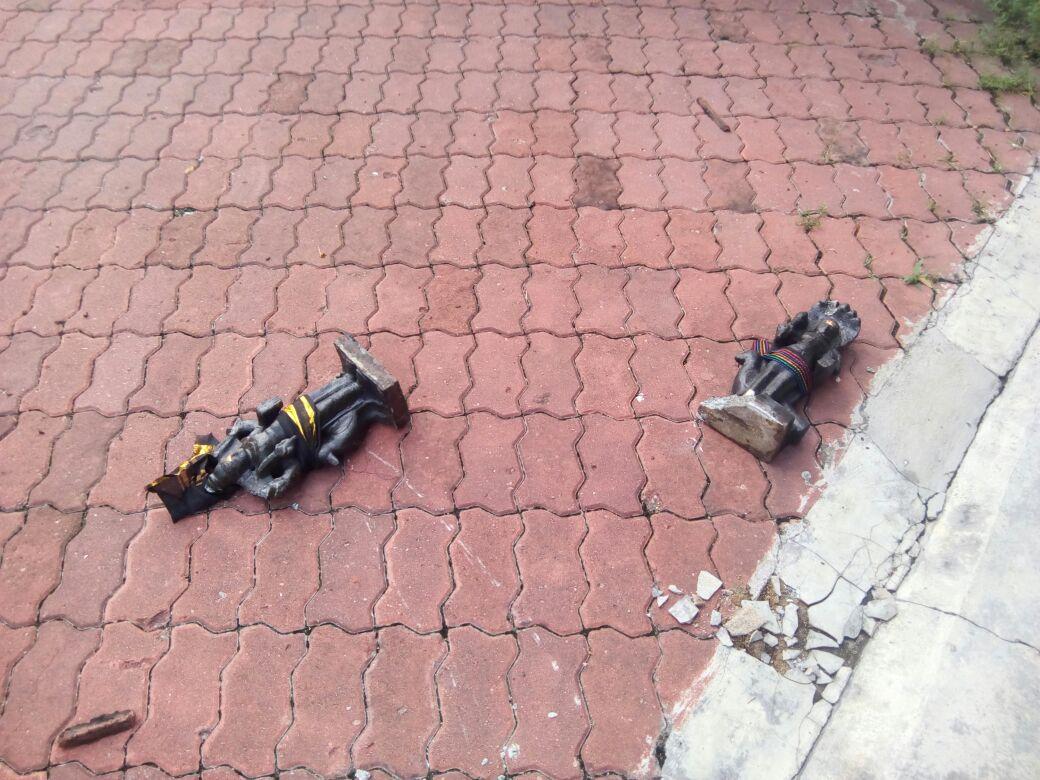 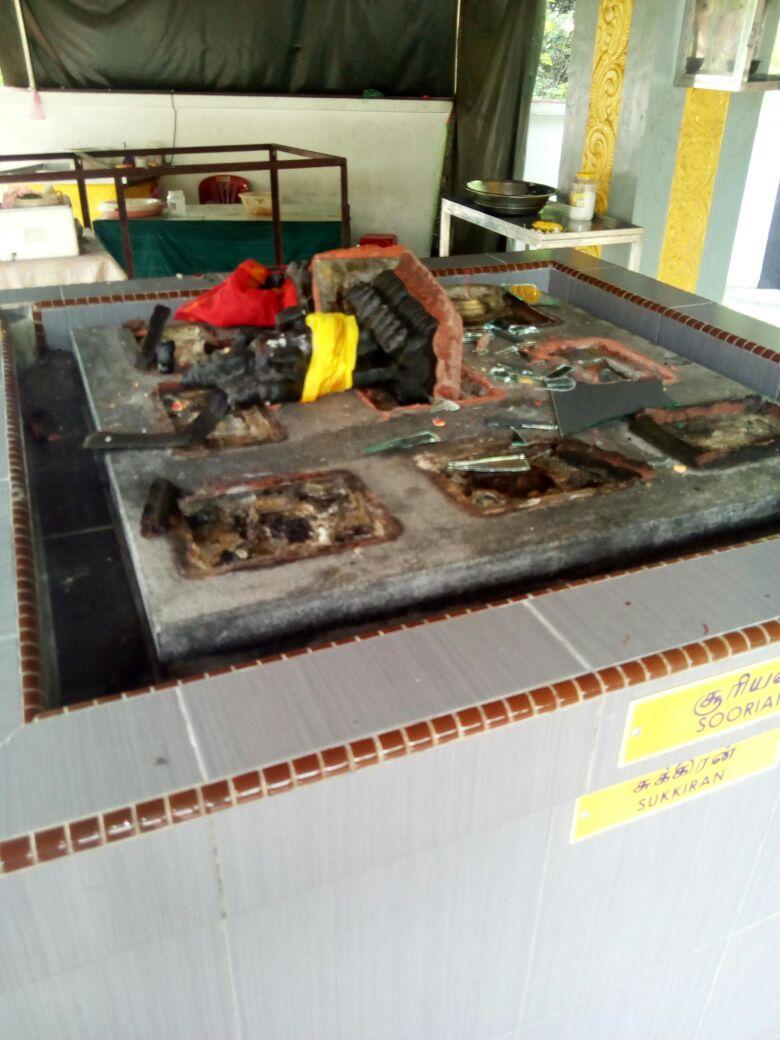 In the incident, the man opened the unlocked temple gate and parked his car in the temple at around 5pm.

A temple committee member said the man did not appear to be of sound mind.

“Our assistant temple priest said the man was holding a machete. He then took a metal rod from his car and started breaking the nine deities of the Navagraham (nine planets),” he said.

“After that, he went into the main deity area and started breaking decorative statues,” he said, adding that the man could not access the main altar to do further damage as it was locked.

“The priest called the temple committee members and we immediately alerted the police,” he said.

The man then drove away from the temple but met with an accident in Fair Park, where he was arrested by police.

A deranged Muslim desecrates a Hindu temple while yelling (as proof to his devotion to his faith) that God is great. But God is also fair and understanding and does not tolerate hatred towards those who have done nothing against you … ‪#‎balasankatduniajuga‬

1 Response to Not guilty as he was amok: Doctor who desecrated Hindu temple in Ipoh..