RPK said “I won’t be silenced!” but retracted his article.

RPK has declared himself a supporter of Najib and stated that the prime minister would remain in office despite the efforts to dislodge him.

Raja Petra “I won’t be silenced” Kamarudin is silenced!

The article, titled ‘A Record of Untrue Stories – The Case of Clare Rewcastle’, also carried a picture of Rewcastle-Brown with the caption, ‘A fraudulent journalist’.

In Malaysia Today‘s statement of regret published on its website yesterday, the portal noted that the article made a number of allegations against Rewcastle-Brown, who had complained that they were untrue.

“We did not write the article and were not involved in its writing and we do not have any relationship with its authors.

“We do not know who the authors are and do not endorse the article.

“We took the article down from our site after we received her complaint and we regret any distress caused,” Malaysia Today said.

The statement of regret came after a letter of demand was issued to Raja Petra by Rewcastle-Brown’s lawyers on April 7.

Does anyone still read RPK‘s nonsense .. aside from his UMNO paymasters that is? http://www.freemalaysiatoday.com/category/nation/2016/04/10/rpk-dr-m-sarawak-report-trying-to-gag-me/ … 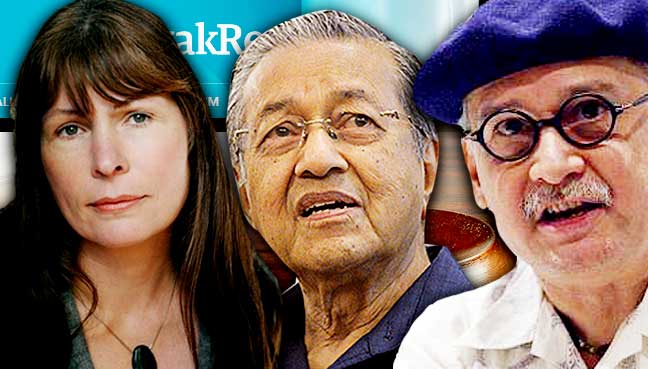 PETALING JAYA: Raja Petra Kamarudin has accused Sarawak Report editor Clare Rewcastle-Brown and the anti-Najib forces around former Prime Minister Dr Mahathir Mohamad of attempting to silence him for life through a court order and, at worst, commit him to jail.

He wrote today that he had been sent a legal notice from Sarawak Report to take down all articles about Clare Rewcastle-Brown and Sarawak Report published at Malaysia Today and to publish an apology drafted by them.

He vowed not to back down, and defiantly wrote: “Do your worst”.

Raja Petra said the anti-Najib forces around Dr Mahathir Mohamad were behind the attempt to gag him. He has previously described Rewcastle-Brown as being an agent of Dr Mahathir, and said a cabal of businessmen had funded an international campaign to force Najib Razak out of office.

Conversely, Raja Petra has rebutted many of the allegations against Najib and has himself published leaked information about the anti-Najib campaign. He has declared himself a supporter of Najib and stated that the prime minister would remain in office despite the efforts to dislodge him.

“After losing the battle in the court of public opinion, Tun Dr Mahathir Mohamad, the ANC, Clare Rewcastle-Brown and Sarawak Report now want to use the court system to silence me and to prevent me from writing,” Raja Petra wrote today.
…

Addressing Dr Mahathir, Rewcastle-Brown and Sarawak Report directly, Raja Petra said: “Do your worst. We have both now crossed the Rubicon and there is no longer any turning back.”

3 Responses to RPK said “I won’t be silenced!” but retracted his article.