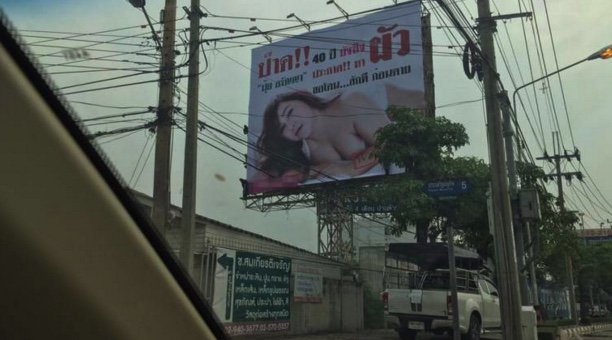 …
BANGKOK:– A well-rounded and famous soap star has posted a huge billboard in Bangkok that says:” I am a virgin and I need a man!”

The sensational billboard has caused a storm on Thai social media since it went up some days ago on the busy Kaset – Nawamin main road in northern Bangkok. Using direct Thai language it says she has never had a man, she is now 40 and needs a husband!

Aranya Prathumthong – otherwise known as Pui – who is in fact 45, appears semi-naked in the giant billboard writhing sexily. She apparently paid for the advert herself!

Opinion was divided on Facebook as to the sense of such an action. Some wondered if it was a sensible thing to do while cynics said it was all about self promotion.

Pui – who sports a few more pounds than is usually fashionable in a Thai woman – has appeared in many films though she usually plays the friend or the elder sister of the main star and never gets the man.

Hence the frustration and the billboard, some have said.

She is currently on Channel 3 and in a Channel 7 soap now airing.

A friend of the porky princess told Thai Rath online: “She really is trying to find a husband. She is most certainly a virgin. She has never been touched by a man.

“She has not even had a boyfriend and now she is absolutely ready to start a family,” the unnamed friend adde

Thai actress, 45, in trouble after putting up billboard for husband to ‘lose virginity to’ http://bit.ly/1VouU1T 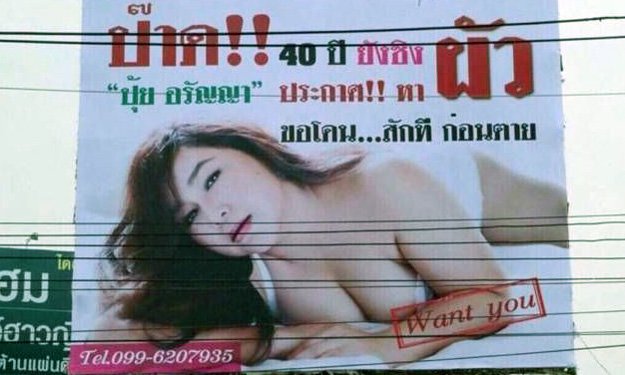 Like Loading...
This entry was posted in Uncategorized and tagged advert proposal by thai actress, Thai actress advertises for husband on billboard, Thailand. Bookmark the permalink.