The attacker is Koh Weng Onn, who is single, and works odd jobs. His older brother, Muhammad Johan Koh, is a Muslim convert.

JUST IN: Family of man arrested for assaulting three madrasah students has apologised to the Malay-Muslim community

SINGAPORE — The family of a 48-year-old man arrested for assaulting three madrasah students last Friday morning has apologised to the Malay-Muslim community.

Mr Koh Weng Onn, who is single, and works odd jobs, was nabbed by the police on Saturday (April 2). On Sunday, his older brother, Mr Muhammad Johan Koh, contacted TODAY to discuss the alleged attack, and to apologise.

Saying his younger brother has been suffering from mental issues since young and was admitted to the Institute of Mental Health in the 1990s but refused treatment, the elder Mr Koh said: “We were always afraid that something like this would happen one day.”

The 49-year-old relief security guard, who is a Muslim convert, added: “After all that has happened, this is our way of apologising to the Malay-Muslim community.” 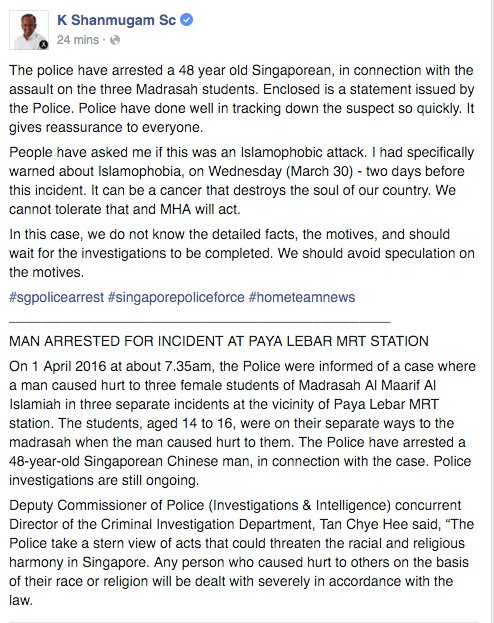 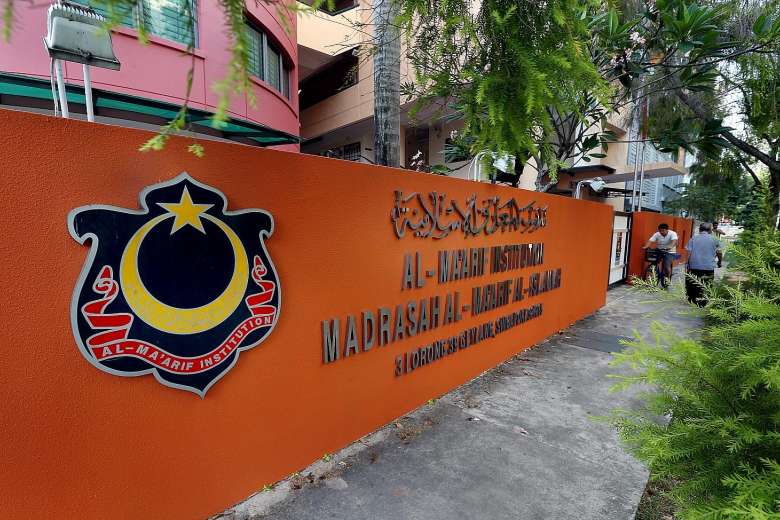 A Singaporean man was arrested yesterday in connection with separate alleged attacks on three female madrasah students near an MRT station the morning before – incidents which drew widespread condemnation from ministers, MPs, religious leaders and the public.
…
At 9.50pm yesterday, police revealed that a Chinese suspect was in custody. The swift arrest was praised by Deputy Prime Minister and Coordinating Minister for National Security Teo Chee Hean. “As a society, we should stand together against all forms of violence against innocent persons, especially if there may be racial or religious undertones.”
…

Last Friday night, Home Affairs and Law Minister K. Shanmugam posted on Facebook in response to the alleged attacks that “we will get to the bottom of it and ensure that justice is done”.

Just two days before, after a closed-door meeting with 60 students from the six full-time madrasahs, or Islamic religious schools, here, he highlighted that feedback from Muslims indicates they are concerned about the rising Islamophobia in Singapore. He called on Singaporeans to reach out to their Muslim neighbours to build social cohesion and prevent prejudice against Muslims from developing.

This is the madrasah…

3 Madrasah students were on their separate ways to school when they were attacked: Police http://bit.ly/1VjnY6o 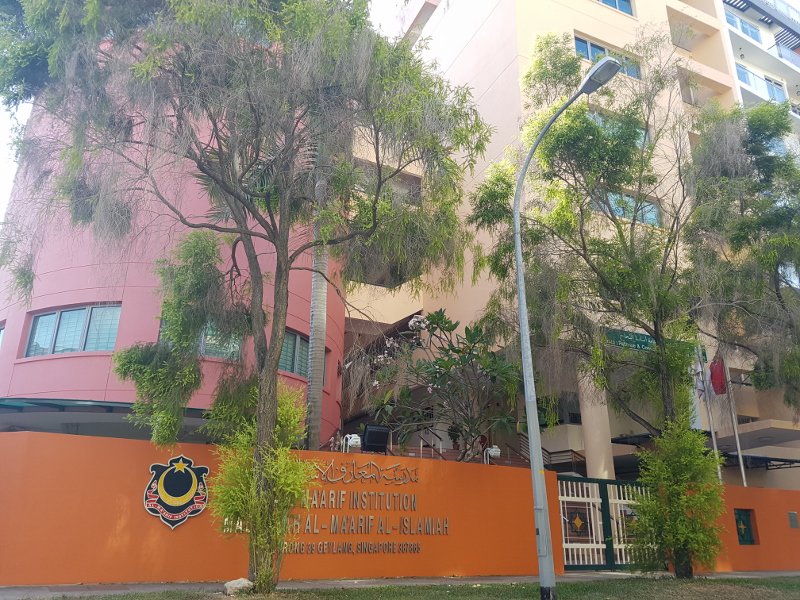 According to Ms Nisha, her students were allegedly kicked and hit by “a foreign Chinese middle-aged man wearing a red t-shirt, light brown bermuda with black boots carrying a green backpack while holding a white plastic bag filled with a heavy item.”

“The first victims was kicked at the left thigh, 2nd victim was hit by the plastic bag containing a heavy item and the 3rd victim was hit in the same manner on one of her eyes,” she wrote.

In her post, Ms Nisha said that a police report had been lodged and appealed for witnesses to come forward. Her post has since been made private but it is being widely shared on social media.

‘Attack on innocent can never be condoned’: Grace Fu on the assault of 3 madrasah students http://tdy.sg/1UIkjAC

The Islamic Religious Council of Singapore (MUIS) on Saturday released a statement, emphasising the importance of staying calm and letting justice take its course.

“MUIS shares the community’s concern for the three madrasah students who were assaulted yesterday. MUIS has confidence in the police who are actively investigating,” it said.

“In the meantime, let us extend our prayers to the affected students so that they may recover quickly from this incident,” MUIS added.

I have been told of three Madrasah students being physically attacked today in a public place. At this point, the motives for the attack are not clear.

I have asked the Police to investigate the matter. We will get to the bottom of it and ensure that justice is done.

SINGAPORE — The police are investigating a case of physical attacks carried out against three Madrasah students in a public place, said Home Affairs and Law Minister K Shanmugam on Friday (April 1).

Posting about the incident on his Facebook page at around 11.30pm, the minister said the motives for the attack are not clear at this point but he has asked the police to “get to the bottom of it and ensure that justice is done”.

The minister did not name the madrasah or the location of the attack but a Facebook post by a user named Nisha Mohd Hussein, purportedly a teacher from Madrasah Al-Ma’arif Al-Islamiah, said “at about 7.20am at Paya Lebar MRT, our students … (were) physically abused by a stranger”.

She also described the victims’ description of the assailant, adding that one student was kicked on the left thigh, another hit by a heavy item contained in a plastic bag, and the last was “hit in the same manner on one of her eyes”.

The incident took place two days after Mr Shanmugam visited another madrasah, Madrasah Irsyad Zuhri, and called on Singaporeans to reach out to their Muslim neighbours and build social cohesion, at a time when a recent string of terror attacks globally threatens to fray the trust between communities here.

Several students had expressed concern about anti-Muslim sentiment, and Mr Shanmugam underlined the need to thwart Islamophobia – or prejudice against Muslims – from developing.

“Whatever it is, we’re Singaporeans together and that trumps everything else,” he said. “The 85 per cent who are non-Muslim have an obligation to reach out to the Muslim community and make sure the bonds are strong”, he added.

Salam to all.
As much as we know about the mishap which occured today, we would like to thank all who have called our school out of concern for our students’ well-being. The affected students have been counselled and parents have been contacted. Kindly be assured that the case is currently under police investigation. We seek your support to supplicate ‘doa’ in your prayers and avoid sharing the initial post so that this case can be resolved quickly and dealt with justly, to ensure our students’ safety.
Thank you.
Wassalam.
Admin.

Facebook user Ms Nisha Mohd Hussein, a discipline mistress at Madrasah Al-Ma’arif Al-Islamiah in Geylang posted about the alleged incident, which she said took place at 7.20am at Paya Lebar MRT station.

She said three students from the all-girls school were allegedly kicked and hit by the man. “The first victims was kicked at the left thigh, 2nd victim was hit by the plastic bag containing a heavy item and the 3rd victim was hit in the same manner on one of her eyes,” she wrote.

The students described the attacker as a middle-aged man wearing a red T-shirt, light brown bermudas with black boots and carrying a green backpack and white plastic bag.

She appealed for eyewitnesses to come forth but has since made the post private, although it is still being widely shared on social media.

Like Loading...
This entry was posted in Uncategorized and tagged ----, 3 madrasah students attacked by man in singapore, Islam muslim in singapore, madrasah schools, religious tolerance in singapore, singapore religion. Bookmark the permalink.