Datuk Seri Hamzah Zainuddin: It’s those who don’t believe in God [who] are the ones who always raise prices…

Remember Perkasa’s take on natural disasters? The floods are caused by Oktoberfest, dog-petting, gambling, prostitution, Halloween, LGBT, and other vices.

In Malaysia: Perkasa gives a twist to twisters, tornadoes, freak storms and other natural disasters..

Now we have a Minister who blames inflation on those who don’t believe in God!

Universiti Malaya Association of New Youth (Umany) president Ho Chi Yang said in a statement that it was “completely unprofessional” of Hamzah to claim that those who raise prices don’t believe in God as the minister should be seeking solutions instead of pointing fingers.

Ho noted that after the government rolled out the Goods and Services Tax (GST) last year, prices of goods all around became notably higher, adding greater burden to the lives of struggling Malaysians.

“Now, Hamzah Zainuddin attributed the reason for inflation to be related to the religions of the people. This proves that he is an unprofessional minister and he is worse than Datuk Ahmad Maslan,” he said.

“This brings us to the government raising taxes and imposing GST, and cutting subsidies, all of which have caused prices to rise in the market.”

“Does it mean that the government and the Ministers can be grouped together with those who don’t believe in God.” 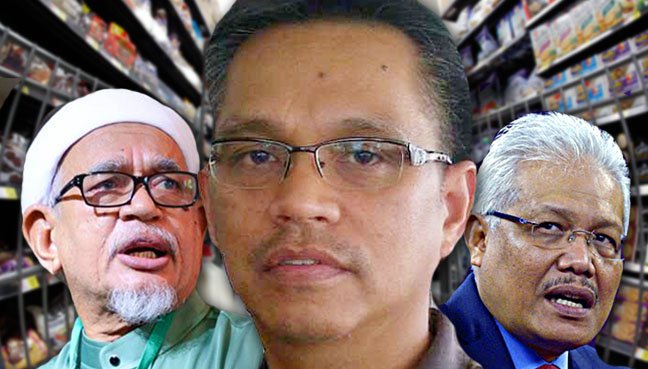 The traders can’t be expected to maintain their old prices just because they believe in God and want to defend that position.

KUALA LUMPUR: Hamzah Zainuddin, who replaced Hassan Malek as Minister of Domestic Trade, Cooperatives and Consumerism, more or less has the same “sickness” as his controversial predecessor, noted a political analyst in his latest blog posting. “In his latest statement, Hamzah said that only traders who don’t believe in God will raise prices.”

“If you ask me, God has never asked anyone to raise or lower prices. However, only those who don’t believe in God raise prices,” Shahbudin Husin the analyst quoted Hamzah as saying. “Where did this Minister study religion?”

“Abdul Hadi Awang, PAS President, should advise Hamzah, engage with him and give him some guidelines on belief in God.”

In short, the analyst fails to see the connection between belief in God and raising prices of goods or otherwise in the market. “It was not so long ago, on July 28 last year, that people were glad to see Hassan’s back. They expected someone better than Hassan to replace him, or at least not somebody worse and/or who issues statements that make no sense.”

Shahbudin pointed out the Ministry was the closest to the people especially when it comes to prices in the market for daily essentials, and whether they move up or go down. “If the Minister cannot help stabilise prices, at least don’t make statements that make no sense.”

“Such statements are merely to cover up one’s own weaknesses.”

KUALA LUMPUR, March 10 ― Only those who don’t believe in God will raise the prices of goods and services, Domestic Trade, Co-Operatives and Consumerism Minister Datuk Seri Hamzah Zainuddin said in the Dewan Rakyat today.

His unexpected reply came after opposition lawmaker Dr Tan Seng Giaw asked if the recent rise in the prices of goods was in the “hands of God”.

“YB Kepong asked if raising prices of goods is in the hands of God. God has never told anyone to raise prices or reduce it.

The Larut MP then suggested that the rival lawmaker’s query indicated the latter’s lack of faith.

“His question might be because he is unsure whether to believe in God or the otherwise,” Hamzah added.

When met outside the Dewan Rakyat later, Hamzah said Tan’s question was “not very funny”.

Like Loading...
This entry was posted in Uncategorized and tagged Datuk Seri Hamzah Zainuddin says those who believe in God will follow ethical ways and not simply raise prices, inflation in malaysia, malaysia. Bookmark the permalink.

1 Response to Datuk Seri Hamzah Zainuddin: It’s those who don’t believe in God [who] are the ones who always raise prices…