SINGAPORE: More than half of the tycoons on the 2017 Forbes Malaysia Rich List appeared unfazed and saw their fortunes rise despite tough times.

Robert Kuok retained the top spot on the list for the 12th consecutive year with a net worth of US$11.4 billion (RM50.7 billion), up from US$10 billion previously.

The 93-year-old patriarch of the Kuok Group controls an empire that includes palm oil, shipping and property.

Quek Leng Chan, who chairs privately held conglomerate Hong Leong Co (Malaysia), moved up one spot to number two with a net worth of US$6.8 billion, up from US$5.3 billion last year.

Quek replaced Ananda Krishnan, who slipped to third spot this year as his wealth declined 12.2% to US$6.5 billion amid uncertainty around his debt-laden Indian telecom firm, Aircel.

While the fortune of gaming tycoon Lim Kok Thay (6, US$4.45 billion) declined slightly, mainly due to a weaker ringgit, the share price of his Genting Bhd had risen since November 2016.

Among the newcomers to this year’s list are brothers Koon Poh Ming and Koon Poh Keong (13, US$1.05 billion), who are the two biggest shareholders of Press Metal, Southeast Asia’s largest integrated aluminum producer.

Shares of the company surged nearly 2.5 times in the past year, giving the company a market capitalisation of US$2 billion.

Also new to the list is Wong Thean Soon (39, US$330 million), thanks to his listed electronic services company MyEG Services.

Wong launched the company in 2000 to improve interactions between Malaysian citizens and the government in areas such as immigration, licencing, utilities and tax payments.

Loh Kian Chong (50, US$210 million), whose conglomerate has interests in motor vehicles and palm oil, suffered the biggest loss in percentage terms on this year’s list.

His net worth fell by 24%, nearly knocking him off the list.

Rich not richer in Malaysia as billionaire numbers shrink

The number of billionaires shrunk by a quarter last year, to 12 from 16, according to the ranking of the 50 wealthiest Malaysians, while only six people on the list grew their fortunes.

KUALA LUMPUR: Malaysia’s richest saw their fortunes slump by up to half last year, Forbes said on Thursday, as the country grapples with weak oil prices and a financial scandal.

The number of billionaires shrunk by a quarter last year, to 12 from 16, according to the ranking of the 50 wealthiest Malaysians, while only six people on the list grew their fortunes.

Energy-dependent Malaysia’s economic outlook has been a source of major concern since oil prices began to plunge in mid-2014. They are now trading around $30 a barrel, down some 70 percent.

A slump in the ringgit, Asia’s worst-performing currency last year, along with a scandal involving Prime Minister Najib Razak and a state-owned investment company have further rattled financial markets. Both have denied any wrongdoing.

“With the stock market falling 8.7 percent and the ringgit losing 12.6 percent of its value against the dollar, it was a difficult year for Malaysian tycoons,” Forbes said in a statement.

“The slowdown in China and the continuing political showdown in the capital also hurt business. The worldwide oil and gas depression also took a toll on fortunes related to that industry.”

Forbes calculates the rankings in US dollars, which means fortunes held in ringgits are worth less when the Malaysian currency falls.

The countries with the most millionaires http://onforb.es/1lKcZFj 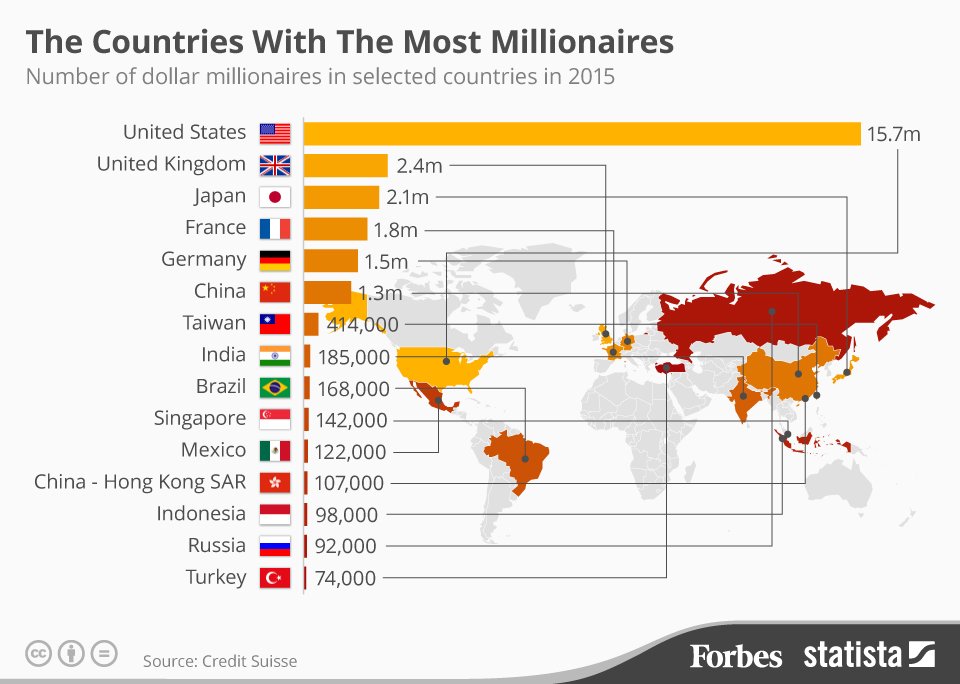 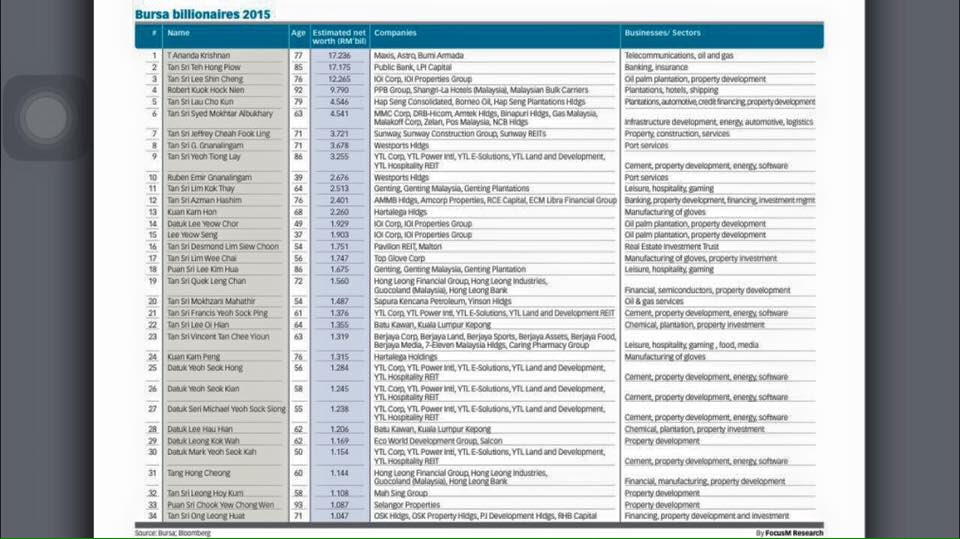 Like Loading...
This entry was posted in Uncategorized and tagged billionaires in malaysia, richest malaysians. Bookmark the permalink.