Posted on September 17, 2017 by weehingthong

I cry every time I see your stupidity.

DID KU NAN FIRE A SHOT AT FELLOW UMNO STRONG MAN, NOR OMAR?

Ku Nan: I cry every time I enter a PPR area

The Federal Territories minister, popularly known as Ku Nan, said he becomes emotional on seeing the conditions, often described as squalid, crime-ridden and in disrepair, in government low-cost residential areas.
.
“I cry and shake my head. I cannot take it when I see people of various races living under such conditions. I cannot take it, maybe you can,” he added.

FMT has previously reported on the serious maintenance and cleanliness problems at PPR projects in the Klang Valley.

For example, residents at the PPR in Lembah Subang 1 were found having to endure the unbearable rubbish odour, a lack of parking space and living in constant fear of break-ins.

I have no intention to become Selangor MB – Noh Omar 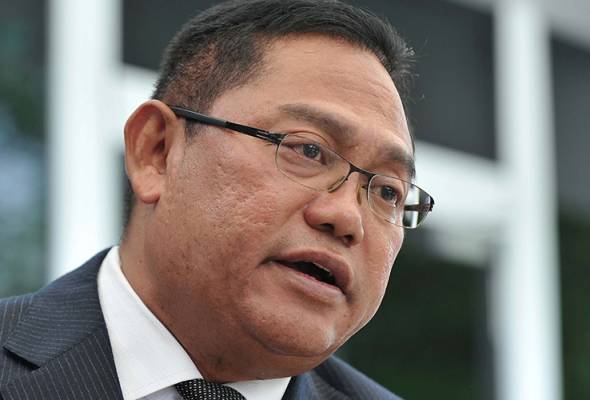 He said all efforts by him and BN in assisting Selangor residents all this while were implemented sincerely as a responsibility to the people in the state.

“A leader should not harbour the ambition to hold posts as it could lead to disappointment and when not chosen, it could also cause a split in the party.

“The post is up to the leadership to give, our priority is to win Selangor first. Whoever is eligible can become the Menteri Besar,” he told reporters after launching a fire safety campaign with residents of Taman Seri Aman Flats in Petaling Jaya, near here, today.

Noh Omar, Deputy Internal Security Minister: “If foreigners think that Malaysia police are brutal, please go back to their own countries and not to stay here.” He was embroilled in the infamous Squatgate scandal. Noh must not be allowed to get away with such unrepentant, recalcitrant and irresponsible conduct, utterly detrimental to the efforts by the Prime Minister to make amends for the Malaysian police’s own Abu Ghraib scandal compounded by Noh Omar’s arrogance and contempt of national and international sensitivities and opinion.

Age-restricted video (based on Community Guidelines)

In 2005, while Deputy Minister for Internal Security, Noh made international news for his role in a controversy concerning the alleged mistreatment of an ethnic Chinese woman by Malaysian police. In response to the revelation of mistreatment and protests by the Chinese government, Noh stated “if foreigners think that Malaysia police are brutal, please go back to their own countries and not to stay here”.[1] Noh was reprimanded by Prime Minister Abdullah Badawi,[2] and Noh issued an apology for his comments that BBC News described as ‘grudging at best’.[3]
https://en.wikipedia.org/wiki/Noh_Omar
… 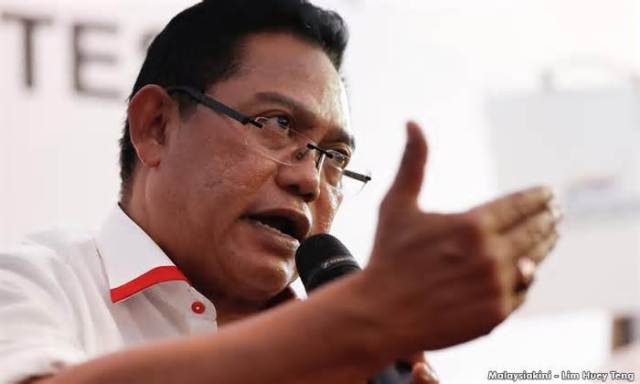 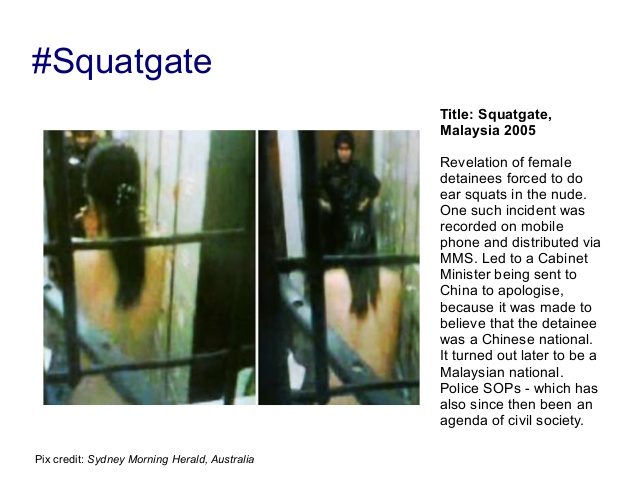 The Malaysian lock-up detainee abuse scandal (also known as Squatgate) is a scandal involving the abuse allegations of detainees (initially Chinese citizens) under the care of the Royal Malaysian Police (Malay: Polis Di-Raja Malaysia, or PDRM) which occurred in 2005.

The scandal began with complaints from two Chinese female citizens about being stripped, having their breasts groped, and being forced to do squats (this has been described as ‘ear squats‘ in most reports, meaning they were touching their ears as they did squats). Member of Parliament (MP) Teresa Kok of the Democratic Action Party accompanied one of them to lodge a police report. Later that month, Kok was given a video compact disc (VCD) by an anonymous whistle-blower that contained a video depicting a female police officer ordering a female detainee, now identified as Hemy Hamisa Abu Hassan Saari, do ear squats in the nude. Kok later showed the video to some other MPs, triggering shock and outrage.

Prime Minister Abdullah Ahmad Badawi insisted that there would be no cover-up, and his deputy, Najib Tun Razak, said the same. Initially the federal Deputy Inspector General, Musa Hassan, made remarks to a similar effect, but also defended the ear squats as “standard procedure”. He later stated, “It is the perpetrator behind the video clip whom we are after and not the policewoman, who was carrying out a routine check.” His comments led the leaders of all three opposition parties and an MP from the ruling Barisan Nasional coalition to call for Musa’s resignation or dismissal. Deputy Internal Security Minister Noh Omar also stirred up controversy when he told foreigners upset about the scandal to “go home”. He later made an apology, saying that he was misunderstood. However, a recording of his remarks indicated that he was not misquoted or taken out of context. An independent commission was later set up under Abdullah’s orders to investigate the scandal.

Azmin had made the reference immediately after Najib announced Muhammad was returning to Umno. Muhammad, better known as Mat Taib, was previously with PAS and later PKR.
.
“What about him using Mahathir, isn’t he an old newspaper? Even worse, he is surat khabar buruk (worn out newspaper).

“He can even glorify Mahathir who is a surat khabar buruk,” Noh told journalists shortly after the announcement at the Umno headquarters in Kuala Lumpur today.

Noh Omar expressed his happiness at Muhammad’s return to Umno, saying that his mentor’s presence has “lifted” his spirits.

“I would like to welcome back my political teacher Tan Sri Mat Taib into Umno… his return has lifted my spirit,” said Noh Omar in a Facebook post on Sunday.

Noh Omar said that he has known Muhammad since his schooling days, and that it was Muhammad Taib who paved the way for him to become Tanjong Karang MP.

“Even during the times outside Umno, our relationship continued as normal and I have also contacted him to get his views and advice,” he said.

Noh Omar said that he had even invited Muhammad to his Aidilfitri open house.

“I myself have invited him back into Umno two years ago,” he said.

Noh Omar said he will be discussing with Muhammad on the latter’s role in assisting Umno Selangor.

“His presence will provide additional strength to all the Umno machinery in Selangor,” he said.
Read more at http://www.thestar.com.my/news/nation/2017/09/17/noh-omar-welcomes-back-his-political-teacher/#QqC0p8xSMWfcDoWm.99

Like Loading...
This entry was posted in Uncategorized and tagged Noh Omar of Squatgate 'fame'.. Bookmark the permalink.