“You know who my son is! He is son-in-law of the prime minister of Malaysia!”

THEY LOVE HERMES BAGS, DON’T THEY??

Maira Nazarbayeva is related to Najib and Rosmah by marriage.

“During the meeting, Edward asked Maira if she was able to pay the outstanding balance and Maira immediately threatened. ‘I am not paying you anything. You know what I can do. You know what I did in Kazakhstan. I will hurt you and your family’,” read the document.

Najib’s in-law accused of not paying for Hermes handbags http://ebx.sh/1QWNigx 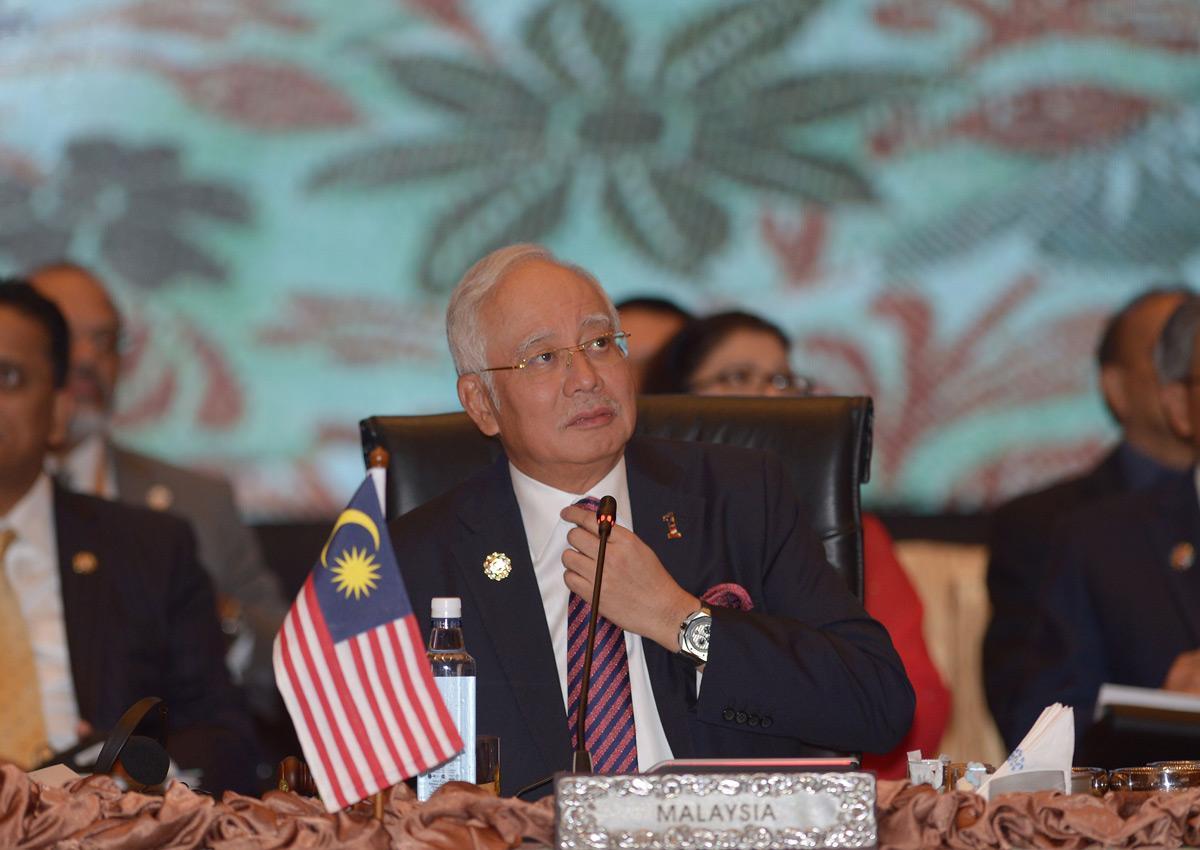 NEW YORK – A Kazakh woman, whose son is married to the daughter of Malaysian Prime Minister Najib Razak, has been accused in court of failing to pay for a dozen Hermes handbags worth US$400,000 (S$565,000), Malaysiakini online news said yesterday, quoting court documents filed in Manhattan.

Madam Maira Nazarbayeva also allegedly threatened to harm the seller by dropping the name of the Malaysian leader, the website said.

Unpaid Hermes bags? Write them off as a ‘donation’

People of her position keep themselves abreast of major world affairs. Therefore, she would have discovered that the prime minister of Malaysia is accused of embezzling massive amount of public funds and stinks of practising corrupt acts.

People in her position would check on the background of others who have conned them.

Therefore, she would have discovered that, in addition to your own rather unsavoury record, your son has allegedly presented faked school results to gain a place at a university in the United States and has claimed that he had received military training at the prestigious Sandhurst when it seems that he has not.

You all – you and your out-laws – are pathetically classless pseudo-nouveaux-riche.

Vent: Some things are so uncanny among birds of a feather. Not only do they flock together they also make the same attempts at preserving their fossilised looks although one appears to have succeeded more than the other.

They beggar others with the same penchant for bags and bling-bling, and are capable of the same levels of intimidation.

Maira and Rosmah Mansor are two soulmates who have found each other in a perfect spiritual relationship through their children’s marriage. No wonder they say marriages are made in heaven.

Roger 5201: Najib’s in-law Maira must have taken the ‘ketuanan’ mantra too far.

In America, you have to pay for the Hermes handbags you ordered regardless of who your father-in-law is.

Dongibab: Maira should make a full statement on this matter very soon. We hope that this matter can be resolved without involving Najib.

She must face the law if she has committed a crime. For now, wait for her explanation.
…
Spinnot: I think they were hoping that Bella would write off the outstanding debt as a ‘donation’.

In total, Bella is seeking no less than US$1.7 million (RM7.25 million) in damages. On Wednesday, she also filed a civil suit against both Maira and Daniyar. 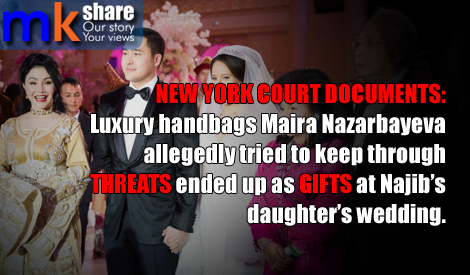 …
Court documents filed with Southern District of New York claim that the expensive Hermes bags, bought by Daniyar Kessikbayev and his mother and not paid for, were used as gifts at Daniyar’s wedding.

The court documents obtained by Malaysiakini state: “Upon information and belief, the defendants, (Maira and Daniyar) used the goods listed in the agreement for their own personal purposes.

“Specifically, they kept some of the goods for their personal use and gave others away as gifts during Daniyar’s wedding.”

By doing this without paying, the court document adds, the defendants had unjustly enriched themselves at the expense of the plaintiff, Bella.

The other damages being sought include breach of contract by not paying for the Hermes bags and also for settlement of the outstanding amount totalling US$401,912.50 (RM1.72 million) for the seven Hermes bags.

PMO aide: Maira’s use of Najib’s name a one-sided claim 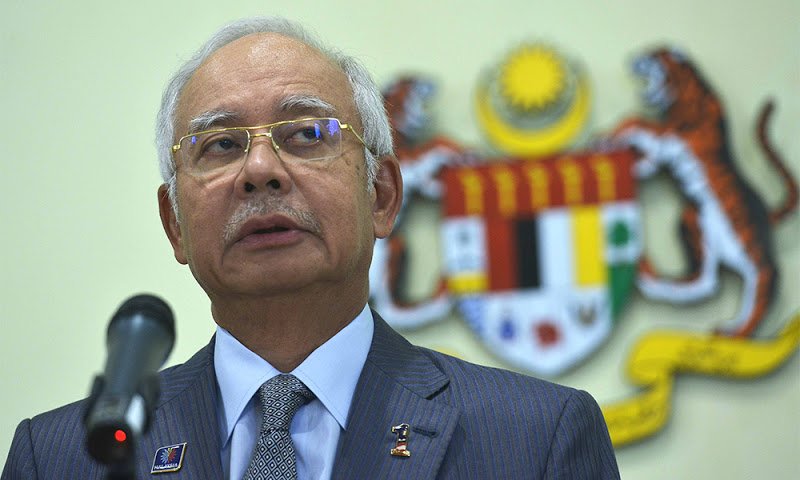 …
Allegations that Maira Nazarbayeva used the name of her in-law Prime Minister Najib Abdul Razak to threaten a businesswoman is merely a one-sided claim, an officer with the Prime Minister’s Office (PMO) said.
…

Rizal Mansor, an aide to the prime minister’s wife Rosmah Mansor, said Maira should be heard before judgment on her is passed.

“We are unsure about it, so we need to wait (for Maira’s lawyer to respond) as it is a one-sided claim from Bella.

“We have to wait for the other side to respond, therefore we (the PMO) cannot make any comments,” Rizal said.

Malaysiakini has contacted Maira’s publicist and is awaiting a response.

Rizal refused to comment further, stating that the incident had nothing to do with the PMO.

“We can’t give any comments, unless it involves the prime minister or Rosmah. Then I can comment,” he said. 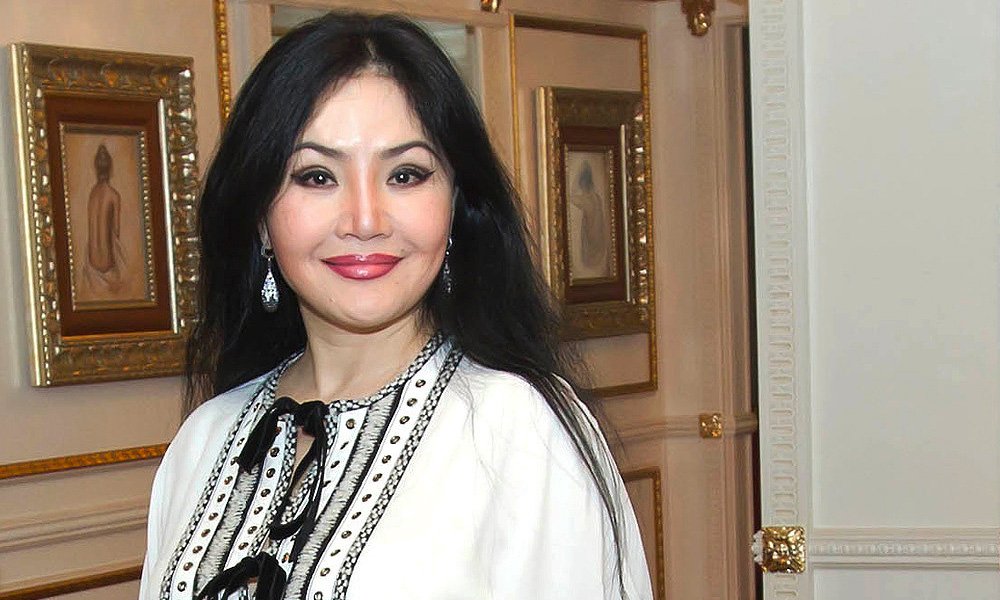 Bella Belkin, the businesswoman who was trying to recover payment for Hermes bags bought by Maira Nazarbayeva, was terrified when the latter dropped Prime Minister Najib Abdul Razak’s name and threatened to harm her.

Bella’s family was threatened by Maira at least three times since June this year, according to court documents obtained by Malaysiakini.

“As a result of Maira’s repeated threats to both Bella and (husband) Edward Belkin, the Belkins feared for their safety and for the safety of their children,” it said.

According to the documents filed with the Southern District of New York, the first threat, where Najib’s name was used, happened during a telephone conversation on June 16 this year.

The document claimed Maira said: “You know who my son is! He is son-in-law of the prime minister of Malaysia.

The court filing, made through law firm Lark B Stumer & Associates, said Bella believed in Maira’s threats were real due to the latter’s track record.

“This threat terrified Bella because at that time Bella recently learned what Maira was capable of and was already accused of doing in Kazakhstan. 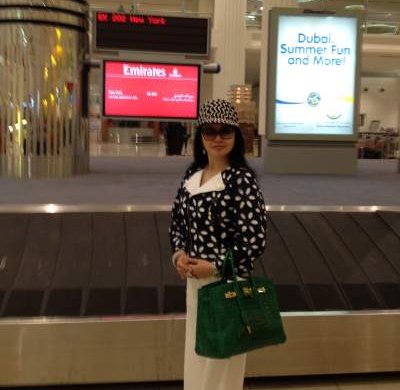 Maira Nazarbayeva, the mother of Datuk Seri Najib Razak’s son-in-law, has reportedly used the prime minister’s name after being accused of taking a dozen Hermes handbags worth US$400,000 (RM1.7 million) without paying for them.

The New York Post reported yesterday that Maira, who was accused several years ago of being a confidence trickster, had ordered the bags from the Financial District business Samilor in 2014 and 2015 but never paid up.

Citing a Manhattan federal suit, the daily said when confronted, Maira had allegedly threatened to hurt Samilor president Bella Belkin and her family.

“You know who my son is! He is son-in-law of the prime minister of Malaysia!” Maira was reported as saying.

“I will hurt you and your family if you sue me!” 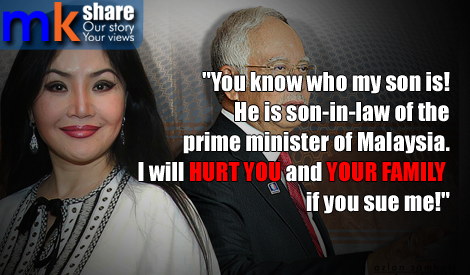 Najib Abdul Razak’s in-law Maira Nazarbayeva allegedly threatened to hurt a businesswoman by citing her relationship with the Malaysian prime minister, according to the New York Post.

Quoting a Manhattan federal lawsuit, the report said Maira had been accused of taking a dozen Hermes handbags worth US$400,000 (RM1.7mil) without paying.

Bolat has also sued Maira and her son in a Manhattan court, reportedly claiming they are both international “serial swindlers who stole a $20 million condo at the Plaza Hotel” from him.

Malaysiakini has contacted Rizal Mansor, the aide of Najib’s wife Rosmah Mansor, for comment and is awaiting his response.

An e-mail seeking a response has also been sent to the Prime Minister’s Department.