Michael Philip
Looking at the above picture, the people attending the ceramahs on the different states in Malaysia. I am shocked to see the number of attendants of PR supporters, they are countless (fantastic), and was very very surprised to see just a hand full of BN supporters attending their ceramah.Looking at the survey done with the app of Iphone, on 23rd April 2013, the result is unbelievable, all the states in Malaysia voted for PR, not even one state the BN can beat PR.

This is to show that the people of Malaysia wanted a new Government, in this election.

A reader from Taiping sent me this photo saying she went for the PR ceramah while her mum went to MCA dinner with the neigbours but all of them vote for DAP!

I can see many hantu’s.Can you?

1.35pm – Muar: PKR’s Muar candidate Nor Hizwan Ahmad meets church leaders at a cafe in Muar town. The cafe serves Hizwan cups of latte with the PKR flag and words such as ‘PKR win’ on it.

“We didn’t ask them to do it, the waiter just saw our PKR T-shirts and they made it like that,” said a PKR activist

1,000,000 Chinese dont want MCA to represent the Chinese
Liked · about a minute ago

Altantuya billboard removed as ‘she is not contesting’

SARAWAK BN chairperson Najib Abdul Razak could have been looking at the smiling face of murdered Mongolian translator Altantuya Shaariibuu – if such billboards hadn’t been removed before his arrival in Kuching to campaign for BN candidates.

The billboards, erected by DAP near the airport and several locations in Kuching, were meant to welcome Najib, said Chong Chieng Jen, Sarawak DAP secretary.

Najib went to Sarawak on Friday on his campaign drive to drum up support for BN candidates and came back yesterday.

Chong said the Election Commission and the Kuching South City Hall sent their officers to take down the billboards with Altantuya’s smiling face that had been put up at Pending, Pandungan, Stutong and Chong Lin Park.

An officer from city council explained that DAP could not put up such billboards since Altantuya was not in the election.

This is despite the fact that there are faces of children appearing in other election campaign billboards that have been put up.

Altantuya billboard removed as ‘she is not contesting’

Massive turnout in Nik Aziz Putrajaya Ceramah.
About 6 thousand people, swarmed the PAS ceramah in Putrajaya’s 3rd precint where PAS Spiritual leader Datuk Nik Abdul Aziz Nik Mat made a suprrise appearance. Alongside him, was PAS candidate Husam Musa who will be contesting in the Putrajaya Parlimentary seat. The turnout was so huge, it raised many eyebrows considering it is no secret that the Putrajaya seat is BN stronghold

DAP’s Chong Chieng Jen says the billboards were put up to send a simple but clear message to Najib Tun Razak.

KUCHING: Three billboards with the words “Siapa bunuh Altantuya” that were erected in strategic points in conjunction with Barisan Nasional chairman Najib Tun Razak’s visit to Kuching today have been demolished.

Chong said the billboards were erected because the Altantuya Shaariibuu murder case continues to remain a mystery.

“The motive of the murder still remains a mystery, and until now there is no answer as to who ‘C-4’ Altantuya,” he said.

“I regret that last night, after we erected the three billboards, immediately two were taken down by the Kuching South City council enforcement officers.

“One of the officers of the city council who is working as an enforcement officer for Bandar Kuching went overboard in his action when he went to Stampin to dismantle the billboards. The Stampin constituency is not within his jurisdiction, so he has abused his power,” he added.

Yes, it is said that there were 2,000 people at the MCA dinner. Food and drinks on the house….

KLANG: The Chinese community here is slowly returning to the fold of MCA.

Klang resident Ng Boon Huah, 41, said the Chinese had been dissatisfied with MCA leaders during the 2008 election but were slowly showing their support to the party.
“People see the positive changes that Barisan Nasional (BN) has made and they are not angry anymore.
“Look at the reception of the MCA events, there are so many people attending,” he said at a dinner organised by the MCA Kota Raja division in Taman Sentosa here on Thursday night.
Ng was there with his group of eight friends, some of whom were also MCA members.
About 2,000 people from the Chinese and Indian communities turned up at the dinner to support BN’s Kota Raja candidates.
It was the third such dinner that Ng had attended and he commented that the camaraderie and atmosphere during these events were always jovial and high spirited.
Read more: Klang Chinese community warming up to MCA – Latest – New Straits Times http://www.nst.com.my/latest/klang-chinese-community-warming-up-to-mca-1.265550#ixzz2RiqYyFAO
BUT WATCH THE CROWD AT THE PAKATAN RAKYAT CERAMAH LAST THURSDAY, 25 APRIL 2013!

Thousands of people at Kluang PR ceramah.Record crowds are seen all over the country. The sentiment on the grounds is majority want to UBAH!

WAS THERE NO FREE FOOD AND DRINKS?

Probably giving a speech to the MILLIONS AND MILLIONS of “Pengundi HANTU!”

Curi-curi Wang Malaysia
Ladies and Gentlemen, what was SAID to be a “HOT SEAT” for the PARLIAMENT SEAT for the FEDERAL TERRITORY of PUTRAJAYA a 1 on 1 fight between UMNO Supreme Council Member TENGKU ADNAN and DATUK HUSAM MUSA of PAS???This was TENGKU ADNAN’s ceramah dinner TURN-OUT held in Putrajaya on the 25th of April 2013 recently LAST THURSDAY despite the lavish tents and quality catering.

If it continues like this…the the Parliamentary Seat for Putrajaya could already be considered…IN THE BAG! 🙂

IN BUTTERWORTH, THEY GOT FREE FOOD AND DRINKS!

People enjoying themselves to free food and drinks at the 1 Malaysia Charity Night at Bagan Lalang, Butterworth, on April 26, 2013. — Picture by The Malaysian Insider

IF THE HUGE CROWDS AT PAKATAN RAKYAT CERAMAH COULD BE CONVERTED TO VOTES, BARISAN WOULD BE SWEPT OUT OF PUTRAJAYA, JOHOR, SEREMBAN, MELAKA…. 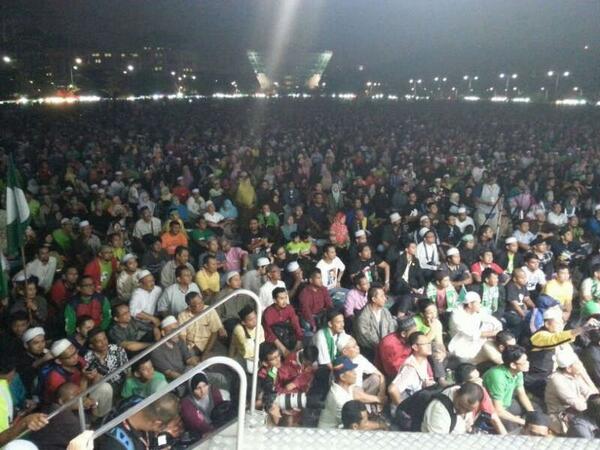 WOW!WOW!WOW! This is the crowd that welcome Tok Guru Nik Aziz in Putrajaya! You will never see this in Utusan,Star,Straits Times,TV1 to 9!

Najib will be having sleepless night from now on! More than 20,000 people in precint 3 putrajaya at Pakatan Rakyat ceramah.

Only 38 people at Pakatan Rakyat ceramah in Seremban!MCA must be very happy!

A tale of two ‘pondoks’

A closer look at each of these “pondoks” one weekend tells the story of the economics of an election campaign.

Near the Amru Ibni Al-as mosque in Sentul around 20 workers and supporters of Pakatan Rakyat (PR) component party PKR are transfixed by a rally video projected on a large screen.

PKR’s “pondok” in Sentul. — Picture by Choo Choy May

Made of old, used tents, the makeshift PKR action room serves as the main venue for the Batu parliamentary seat. Its MP is Chua Tian Chang, popularly known as Tian Chua, of PKR.

“Usually we put on the VCD of speeches from influential and great speakers,” Husni Mohamad told The Malaysian Insider.

“Among videos that can attract people to stop and have a look are speeches by Mat Sabu, Anwar Ibrahim, Saifuddin Nasution,” he said, referring to PAS deputy president Mohamad Sabu, the Opposition Leader, and PKR’s secretary-general.

Besides watching the videos, the campaign workers manning the action room play chess and caroms to pass the time.
……….

They also have to share a single broadband Internet access. “If the guy holding the broadband goes home, we are left with no Internet. We share it and he is the only one who has it,” said Husni, who had been stationed there for two weeks now since Parliament was dissolved on April 3.
………

The difference between their action room and that of the Opposition’s was like night and day.

Three personal computers complete with broadband Internet access are at the ready here for the public to check their names in the register.

“This is how it is every night after we are off duty…  we gather and talk about current issues,” said a young man who refused to give his name.

“If we’re tasked to fix some flags, we will start from 8pm and finish around 12.30am… past midnight,” he added.

The BN action room operates from 10 every morning, but the atmosphere changes when nearby residents and supporters join in as night falls.

The workers are instructed to wear the official shirts emblazoned with BN’s logo to give a perception of uniformity.

“When we work, we need to wear these blue shirts. It’s like our uniform so the people know that we’re BN people,” said another worker, who identified himself Hasnol.

One thing is clear though… whether they are with the ruling coalition Barisan Nasional or the Opposition, the next two weeks are going to be exciting. And they are going to be in the thick of it.

THE WORLD OF ROSMAH AND NAJIB

The biggest handbag in the world is made in Malaysia! Our youths are indeed creative!

At Manjoi, he made us laugh…

ANWAR, CHAMPION OF THE RAKYAT, SITS ON THE GRASS LIKE ALL OF US….

The Kelantanese have rejected BN/Umno for 23 years.What about you?

MediaRakyat
Like This Page · 22 hours ago near Kuala Lipis, Negeri Sembilan
Street of Kuala Pilah is “flooded” tonight

MediaRakyat
Like This Page · 10 hours ago
Di Kuala Pilah, semalam.

NAJIB: high up, looking down on us mere mortals…

A giant banner of Prime Minister Datuk Seri Najib Razak is displayed on the facade of a building ahead of the general election in Kuala Lumpur on April 8, 2013. — Reuters pic

Contrast a life of luxury with a life of simplicity.

Apr 4: The act of ‘eating out’ at ordinary restaurants like any other Malaysians seems to be an occasion for BN politicians to showcase their ‘moderation’ and ultimately score political mileage.

Recently prime minister Najib Razak splashed a picture of him eating out with family members at the upmarket The Curve shopping mall, in what many believe was to drive home the PM and family’s ‘simple’ lifestyle.

But ‘simplicity’ as understood and experienced by majority of Malaysians has always been the norm among the PAS leadership in Kelantan, especially in the person of its Menteri Besar.

For several years now, Nik Aziz, whose simple lifestyle has earned him respect among friends and foes, has made it a rule that only ‘nasi bungkus’ be served for breakfast during exco meetings, as part of the PAS-led state government’s austerity measures.

This is unlike many other states where it is a norm and almost a must to prepare a sumptuous menu everytime government officers attend a meeting.

It’s not lunch at The Curve, just a ‘nasi bungkus’