Are there Big Cats like panthers and leopards in the UK?

There is a British Big Cats Society…

About the British Big Cats Society 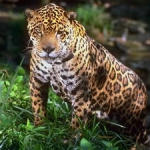 The BBCS has 3 key elements

The British Big Cats Society was set up to scientifically identify, quantify, catalogue and protect the Big Cats that freely roam the British countryside.

The British Big Cat Society is a UK Network of people whose aim is to research, study and analyse the presence of Big Cats throughout Britain. Another major focus will be to educate the public about big cats in general and also more specifically about the ones we believe are present in the UK.

The BBCS enables the public to report their sightings and Big Cat `incidents’ to an `understanding ear’ and we can react appropriately where necessary. The BBCS is willing and able to assist the relevant authorities such as the Police, DEFRA and Wildlife organisations etc- in dealing with Big Cat sightings, evidence and situations as they arise throughout the UK on a 24 / 7 basis.

The society will also be active in pursuing further conclusive evidence and is raising funds to undertake certain projects such as ‘Trigger Cameras’ in order to hopefully identify the species present. Further more detailed and long term studies hope to establish the numbers of animals, where they are located and if there is any possible risk to Livestock and to humans.

The BBCS wishes to see the British big cat population regarded as a (collective) protected species and safeguarded from the gun, as far as is reasonably practicable. Our overall aim is to `Prove and Protect’.

The BBCS is based at Dartmoor Wildlife Park and is in the process of becoming a charity.