2008
Dr. Syed Alwi Ahmad teaches Applied Physics and Applied Physics Lab. at the Centre for American Education in Singapore.  His focus is on Quantum Field Theory and General Relativity. His thesis on black-holes and quantum fields has been published in various conference proceedings. Dr. Syed holds a Ph.D Physics from the Virginia Polytechnic Institute and State University, Blacksburg, Virginia, USA. He obtained his B.Sc from the National University of Singapore. 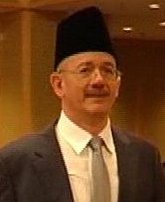 The Malaysian Malay by Dr Syed Alwi of Singapore

THE MALAYSIAN MALAY by Dr Syed Alwi of Singapore

As you know, I am an avid watcher of Malaysian affairs. I must confess that lately, Malaysia appears to be failing. Not a day passes by without more events that clearly highlight Malaysia ‘s race-religion fault-line. If things keep going this way, I fear for Malaysia ‘s future.

Today, schools in Singapore celebrate Racial Harmony Day. I can visibly see the joy in the children’s faces as they wear their ethnic costumes and have fun together at school. But in Malaysia – even the right to choose a religion has become a sensitive, national issue. No doubt, there are many in Malaysia who hate my liberal views on Islam,family included. But I will say what I must say openly. I have come to the conclusion that Malaysia cannot progress any further without first addressing fundamental
questions regarding its identity and soul.

I remember the days when we can laugh at Lat’s cartoons on everyday Malaysian life. But sadly,the Islamic tide has polarised Malaysians.

Some people ask why I should bother about Malaysian affairs since I am a Singaporean. May I remind Malaysians that it was Tan Siew Sin who once said that Singapore and Malaysia are Siamese Twins. Should Malaysia go down – it would hurt the region tremendously. Especially Singapore ..

There is nothing wrong with religion or affirmative action. But, like
everything else in life,they must be taken in moderation and with a pinch of salt. A little doubt is good. Unfortunately in Malaysia , emotions over Islam have overcome reason. What we see today is the result of the NEP and Islamisation policies of the past thirty years or so

No one owes Malaysian Malays a living. Let me assure you that should Malaysia fail – the Malaysian Malay will suffer enormously. And rightly so. After all they have been pampered with all sorts of goodies over the years.

They cannot now expect more goodies. Perhaps the day of reckoning for them, is near. Whatever it is, Malaysia had better wake up to the realities around her. The globalised world of the 21st century has no NEP to offer the Malaysian Malay. And humans cannot live by religion alone.

THE MALAYSIAN MALAY by Dr Syed Alwi of Singapore