The late Jamaluddin Jarjis, Malaysia’s RM2.1 billion man: How did he become so wealthy?

Jamaluddin or JJ was a confidante of Najib Razak, then PM. He died in a helicopter crash four years ago without leaving a will.

He was involved in business before entering politics, setting up engineering consultancy firm J&A Associates.

Her lawyer says they have rejected a proposal by Aminah Abdullah's two grandchildren to settle the suit, which will proceed for a full hearing on Thursday. #FMTNews https://t.co/E9OHwrju2v

KUALA LUMPUR: The mother of late minister and Malaysian ambassador to the US, Jamaludin Jarjis, today failed to settle her suit against her two grandchildren over the transfer of nine million shares worth about RM1.4 billion in three companies to the joint administrators of her son’s estate.

“We told High Court judge Mohd Firuz Jaffril that we reject the defendants’ proposal. We find it unreasonable,” she said.

Kamar said Ikhwan and Anis had offered money in relation to the “faraid” or wealth distribution certificate application filed at the Shariah High Court.

“We said there is no proposal on the companies’ shares that we are asking for at this civil court,” she added.

According to Kamar, the full hearing for Aminah’s lawsuit will proceed on Thursday.

“We have 12 witnesses in total. We will be calling three of them this Thursday.”

Aminah said in her lawsuit that if her grandchildren fail to transfer the companies’ shares, a court official should be authorised to execute the task in favour of the joint administrators.

Aminah is seeking for Ikhwan and Anis, who are joint administrators, to amend by way of court order the schedule of assets in the letters of administration, to include the shares as moveable properties.

She is also seeking for the grandchildren to account for all dividends, bonuses, rights issues, profit and losses arising from them holding the shares.

Kamar said the Shariah High Court had also set Sept 24 for a decision on whether to allow the bid by Jamaludin’s wife, Kalsom Ismail, and her grandchildren to object to Aminah’s application to obtain the faraid certificate.

Aminah had sued Kalsom and her grandchildren over the transfer of properties reportedly belonging to her son to his estate.

She claimed the moveable and immoveable properties, worth about RM2.1 billion, could then be distributed in accordance with Islamic law.

Under shariah law, the mother gets one-sixth of the estate’s assets, the wife gets one-eighth and the remainder is shared among the children.

KUALA LUMPUR: The mother of a former minister, the late Tan Sri Jamaluddin Mohd Jarjis, has filed a suit against her two grandchildren over their failure to include three company shares, worth RM1.3 billion, in the list of her son’s estate.

The High Court has set April 2 for further case management of the matter before judge Datuk Mohd Firuz Jaffril.

In the statement of claim, Aminah stated that the two defendants, as joint administrators of Jamaluddin’s estate, had failed to include the three company shares as inheritance in the list of assets in the letter of administration when Jamaluddin died on April 4, 2015 and also failed to enter the shares as a liability since July 6, 2017.

Aminah also claimed that the two defendants failed to enter the shares of the three companies – Rantai Wawasan Sdn Bhd, Alpine Motion Sdn Bhd and Ivory Insight Wawasan Sdn Bhd – as part of the deceased’s estate with intention to deny her the rights and interest as a beneficiary.

She claimed that her two grandchildren also failed to state the estimate value of the shares, which was worth RM1,384,312,154 two and half years after Jamaluddin died.

Aminah claimed Nur Anis and Ikwan Hafiz also failed to include an apartment, worth RM10 million, in the United States, in the list of Jamaluddin’s assets that was enclosed with the letter of administration.

She also claimed that Ikwan Hafiz failed to inform her that the Syariah High Court had issued to her the faraid certificate on Jamaluddin’s estate on Oct 6, 2016.

Aminah is seeking a court order for her name to included as joint administrators of Jamaluddin’s estate being that she is the biological mother of the deceased and for the two defendants to pay dividends, bonus and profit from the shares in the three companies. — Bernama 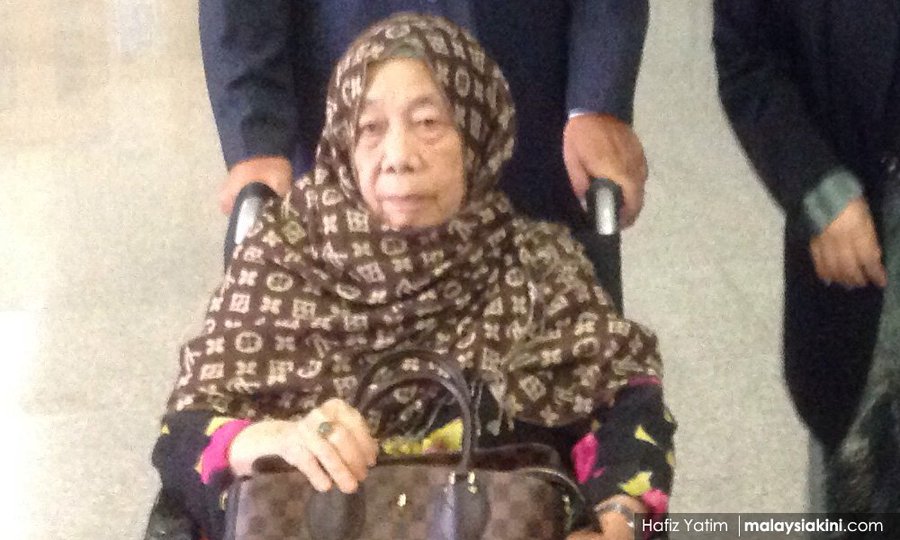 Aminah Abdullah, the mother to Jamaluddin Jarjis, today filed an affidavit-in-reply to set aside her former daughter-in-law Kalsom Ismail’s bid to strike out her RM2.1 billion faraid (inheritance) claim on her son’s assets.

This was disclosed by Aminah’s syariah lawyer, Nur Hidayah A Bakar. However, the lawyer did not disclose the contents of the 84-year-old’s affidavit-in-reply.

Under Islamic law, if the deceased does not leave a will, the mother is entitled to receive one-sixth of the deceased’s estate, while his widow gets one-eighth. His children receive the remainder.

Let’s assume that he saved three-quarters of his earning, and his return on investment on his money (at 10%) would be about RM8 million.

I must declare that all these have been culled from various sources and calculated, making generous provisions for errors. Putting all these figures together, assuming even if he did not spend a sen from his remunerations, his lifetime savings can be put at a ballpark figure of RM100 million.

Please don’t accuse me of not being able to do simple arithmetic by using a calculator. It is not necessary to work to the last decimal point.

Unless something is wrong with the calculator on the PC, the figure of RM2.1 billion will certainly miss the mark by a few zeros. You may find this mind-boggling and you, the discerning reader, can come to your own conclusions.

R NADESWARAN says it is a family feud and Joe Public is only entitled to watch it from the sidelines. Comments: citizen.nades22@gmail.com

The late Jamaluddin Jarjis, the former science, technology and innovation minister who died in the plane crash has left estate worth RM2.082 Billion (RM2,082,000,000.00)

at US$507mil in wealth, means he's richer than Mokhzani and would be #36 in forbes list of richest Malaysian pic.twitter.com/b2nBodJhlJ

Which of the late Jamaluddin Jarjis’ jobs was so profitable that he owned RM2.1 BILLION in assets (as testified by his own mother):

RM2.1 BILLION FORTUNE – HOW DID NAJIB'S LATE STRATEGIST JAMALUDDIN JARJIS MAKE SO MUCH MONEY? MALAYSIANS IN SHOCK AS MOTHER OF EX-MINISTER SUES FOR A SHARE OF HIS ESTATE https://t.co/V67SyD6Ebj

The 83-year old mother of the late minister Jamaluddin Jarjis is seeking her share of her late son’s estate, which is said to be worth at least RM2.1 billion.

Aminah Abdullah, who now resides in Setiawangsa, Kuala Lumpur, wants the Syariah Court to issue a faraid (Islamic wealth distribution) certificate for this in the petition she filed in March this year.
.
Aminah in her petition listed the landed properties, including houses in Malaysia and also in Mecca, Saudi Arabia, and in the United States, as well as a list of assets that included shares owned by the late minister, and those that were purportedly given to her grandchildren, as part of the estate.

The assets comprise 22 landed properties, mostly in Pahang and in the Klang Valley, 21 bank accounts with a total sum of more than RM15 million, including one account in the United States, and shares in 15 companies.
.
The Syariah High Court then fixed Sept 13 for further case management.

Jamaluddin, the former Rompin MP, was said to be a close confidante of former prime minister Najib Abdul Razak and had held various cabinet posts.

He and several others, including Najib’s principal private secretary Azlin Alias, died in a helicopter crash on April 4, 2015.

His estate includes more than 20 properties in Malaysia, the United States of America and Mecca as well as a company he owned. https://t.co/m9XvFoTWG3

The 83-year-old mother has listed various assets belong to the former Rompin member of parliament, including 22 landed properties in Pahang and Kuala Lumpur, 21 bank accounts with a total of more than RM15 million, several properties in the United States of America and Mecca, as well as a company he owned.

Under the shariah, the mother gets one-sixth of the estate’s assets, the wife gets one-eighth and the remainder is shared among the children.

1 Response to The late Jamaluddin Jarjis, Malaysia’s RM2.1 billion man: How did he become so wealthy?