No more nonsense from Ridhuan Tee. For a while anyway.

Malay daily’s editor denies he was under pressure from political parties to get rid of the controversial lecturer.

It claimed it had nothing to do with external pressure.

In a report by Malay Mail Online, Sinar Harian’s Chief Editor Abdul Jalil Ali explained that the change was procedural as a majority of columnists were retained for only “one or two years”.

Tee, he added, was among the columnists who had been writing for almost three years.

“There is no pressure from Umno or MCA or what. He has been given the freedom to write this long, no matter what he writes,” the portal quoted him as saying.

Ridhuan Tee claims got death threats after being labelled ‘traitor’ to Chinese http://dlvr.it/Lfw9TG 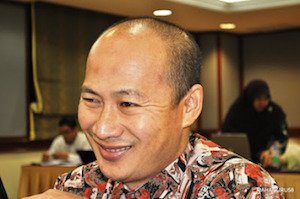 He cited his own case, where he, a Chinese married to a Malay, had stated Chinese as the race of his children.

“Why? Because I’m a Chinese and JPN gives people room to choose their race, according to their parents’ lineage.”

Controversial preacher claims an Opposition politician tried registering her child’s race as “Anak Malaysia” because she was ashamed of her husband’s Indian lineage.

PETALING JAYA: Fresh from his sustained attacks on MCA, controversial preacher Ridhuan Tee now seems to have trained his crosshairs on an Opposition politician, claiming she is racist against Indians.

In his latest column in Malay daily Sinar Harian, Tee wrote about a certain Opposition politician’s failed attempt to get her child, borne with her Indian husband, registered as “Anak Malaysia” in the race column, several years ago.

“Of course JPN (National Registration Department) rejected the bid, as the term does not exist in their registry.

“The attempt and the ensuing backlash was deliberately done and publicised, so that JPN would be blamed,” Tee wrote.

He did not name the politician.

Tee also alleged that in reality, the politician was ashamed to state her child’s race as Indian.

“Where is her ‘Malaysian’ spirit, which values diversity? Furthermore, her party has always claimed to be multi-racial. Why not celebrate the Indian race, by registering the child as Indian? Are the Indians so despised? Are they also not created by Allah? Who’s the racist here, and can a leader like this be counted to lead the nation?” Tee asked.
…

Tee also claimed that the “ultra kiasu” – the usual term he uses to refer to the Chinese, especially from the DAP, look down on dark-skinned people.

Tee further criticised female politicians, who were allowed to go into suraus and mosques during the fasting month, while donning the baju kurung and “tudung”, to “show love and respect for the month.”

“To be honest, is she willing to dress up in such attire every time the Dewan is in session? The answer is no, because the ‘ultra kiasu’ prefer to wear Western attire.”

KUALA LUMPUR, June 20 — Controversial columnist Ridhuan Tee Abdullah alleged today that MCA loves risque attire even though it is against Chinese culture to wear clothes that expose the body.

The Chinese Muslim convert claimed it to be the real reason behind the ruling Barisan Nasional (BN) component’s vocal objections to a recent advice by the Kelantan mufti for non-Muslims in the northeast state to cover-up during Ramadan.

“MCA has always loved anything that exposes the body. This is weird because to say this is Chinese culture is untrue.

“Are they not ashamed when they put on shorts?” Tee said in his column titled Kenapa suka buka-buka? (Why do you like exposing things?) in Malay daily Sinar Harian.

The Universiti Sultan Zainal Abidin lecturer also alleged that MCA’s criticism of the Kelantan mufti’s advice is proof that the Chinese-based party is “for segregation”.
See more at: http://www.themalaymailonline.com/malaysia/article/mca-likes-chinese-to-dress-sexily-ridhuan-tee-claims?utm_content=bufferb8250&utm_medium=social&utm_source=twitter.com&utm_campaign=buffer#sthash.KV94sYAa.dpuf

“Obviously, he is now trying to get public attention by proving that he is more Malay and Muslim than Malay Muslims by hammering his own heritage as gatal punggung (getting antsy) or suka buka-buka,” she said.

Wanita MCA chief Heng Seai Kie said this was an insult to all Malaysian women because his remarks are sexist.

“Ridhuan’s allegations are baseless and just downright ridiculous. Even worse, his claims sink to new levels of malice as they aim to create hostility and suspicion among the different races while provoking hatred by Muslims against MCA.

“Moreover, his tarring of non-Muslim as suka buka-buka (like to wear revealing clothing) is a humiliation to non-Muslim women, is racist and sexist. He must apologise to all Malaysian women,” she said in a statement.

Heng added that non-Muslims know how to dress appropriately, including when attending festivities as guests in Muslim homes.

“Malaysians don’t need Ridhuan Tee to teach us what to do and how to dress. It is already in our culture. We dress accordingly due to our mutual respect towards other ethnic cultures and practice…

A MIC leader is amazed at how controversial academic Ridhuan Tee Abdullah is able to sink to a level which, he claimed, would be an impossible feat for others.

“Whenever I think he cannot go any lower than he already has, he surprises me with his unenviable skill of lowering the bar several more inches,” S Vell Paari told Malaysiakini.

The MIC central working committee member was responding to Ridhuan’s comments on the Universiti Teknologi Malaysia (UTM) modules, which contained erroneous information on Hindus and Sikhism.
…

However, Vell Paari said if Ridhuan needed an expert to determine if Hindus learned cleanliness from Muslims, as mentioned in the slides, then the latter too should be sent for expert evaluation.

“We need an expert to evaluate how this person is capable of making such moronic statements and be regarded as an academic at the same time.

“I am not sure what he teaches, but I am certain he would make an excellent geologist lecturer since his comments indicate he often has his head buried in the sand,” he added.

Ridhuan Tee Abdullah wants the person responsible for the controversial Universiti Teknologi Malaysia (UTM) slides on Hinduism and Sikhism to be given a chance to defend his or herself.

“It’s true that the UTM slides are flawed but give the person a chance to defend their argument (on the contents).

“If the person fails (to provide an explanation), then the person should apologise. Don’t attack him or her so emotionally,” he told Ismaweb.

The controversial academician was also disappointed with Deputy Education Minister P Kamalanathan for becoming emotional over the matter.

He also lamented that UTM had bowed to pressure and in a cowardly manner issued a statement in English that the matter is being investigated.

According to him, it is unfortunate that when one does not argue based on knowledge but rather act due to the fear of losing their jobs.
…

Meanwhile, Ridhuan said he hoped the police would not be pressured to act in a swift manner.

“I suggest that the contents (in the slides) be brought to an expert so that it can be determined whether this can be accepted as a form of knowledge or not.

“The influence of Islam is undeniable in the Sikh religion. Similarly, the arrival of Islam in India had brought justice. No more caste. Also (no more) women who set themselves on fire upon the death of their husbands,” he added.

Ridhuan said he also taught Titas but did not use those slides.

Chiding those who lashed out when the matter of the slides arose, he said when Islam was insulted, it was not considered a big deal.

However, he said just because of some erroneous slides, there is such pressure for the lecturer involved to resign.

SO DID ‘ALLAH’ ALSO MAKE THE ‘ULTRA KIASUS’: FINALLY RIDHUAN TEE ADMITS ‘ALLAH MADE HIM CHINESE’

Tee: Up to Malays if they want to be Arabs

PETALING JAYA: Ridhuan Tee Abdullah has taken a swipe at those concerned about creeping Arabisation in the Malay community. He also warned non-Muslims to stay away from matters pertaining to Islam.

In his weekly Sinar Harian column, the controversial preacher lamented that the “ultra kiasu’ were crying ‘Arabisation’ when Malays wore Arabic clothes, as if it was a mockery to follow Arabic culture.

He said there were Malay rulers who were descendants of Arabs, and questioned what the ‘ultra kiasu’ wanted the Malays to be.

Activist Marina Mahathir was the latest to speak about the creeping Arabisation in Malaysia, saying it was a form of neocolonialism.

She had said recently that it was a big issue, as it was not limited to fashion but also mentality.

Tee said the “ultra kiasu” were “parasites” that needed to be “buried” at the coming Sungai Besar and Kuala Kangsar by-elections.

“This is what needs to be done by the Muslims in the Sungai Besar and Kuala Kangsar by-elections soon.

“Do not let victory go to Amanah and Pakatan Harapan as it will make them more arrogant.”

He said the bill should not be questioned by non-Muslims, just as how Muslims did not interfere in the lifestyle of non-Muslims.

Tee said Muslims never stopped the non-Muslims from living their lifestyles, citing their revealing attire, and questioned why there was opposition when it came to the Muslim way of life.

He pinned the blame on the “Christian Evangelists ultra kiasu” who, he said, were getting more bold. As an example of this attitude, he cited Jakarta Chinese Governor Basuki Thahaja Purnama’s decision to bar schools from enforcing the use of the hijab. 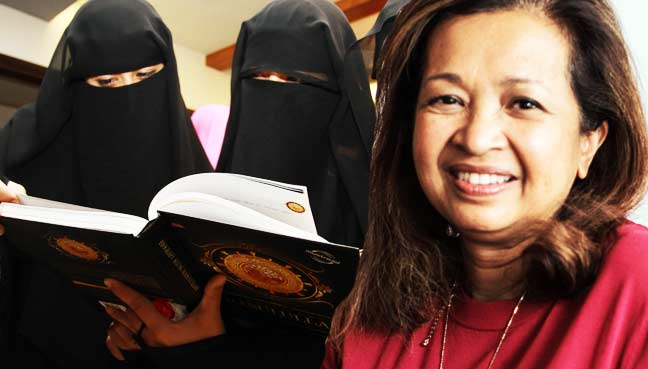 Activist talks about Arab ‘colonisation’, the ‘Save Malaysia’ campaign and other issues in magazine interview.

Describing it as “a form of colonialism,” the social activist said all Malaysians should be very concerned about the trend where Arabic culture was taking over Malaysian culture.

In an interview with Southeast Asia Globe magazine, Marina said: “This is a huge issue because it’s not just a matter of dress, but mentality.”

She said when she brought this up, there were those who asked what was wrong with such an attitude, as Malaysia had always absorbed different things.

“Yeah, but we absorb it normally, organically. These days it feels imposed. There’s so much pressure. If you work in the Government sector as a woman you feel compelled to wear the tudung (headscarf) or you are sidelined.”

On Women’s rights, Marina said: “Malaysia is a funny place. Honestly, it’s not like many Muslim countries. Women here are educated and achieve high positions. But the mentality remains, especially among men, that a woman’s place is smaller. Especially at home, women always have to submit to the husband.” She said this attitude had much to do with religious law.