Hasan Arifin has taken more than a month to think of an excuse to justify his “unilateral and arbitrary” deletion in the PAC Report on 1MDB. 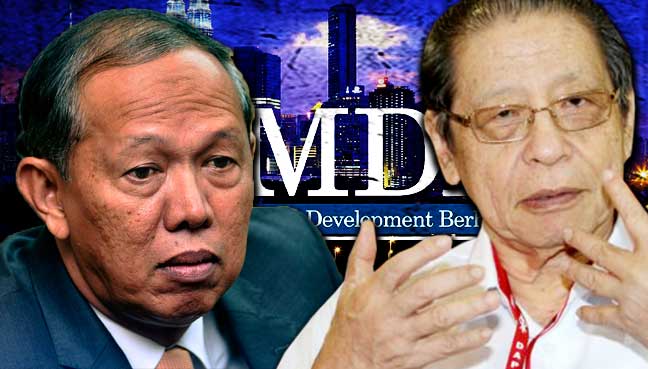 KUALA LUMPUR: DAP Parliamentary Leader Lim Kit Siang wants to know whether Hasan Arifin, the chairman of the parliamentary Public Accounts Committee (PAC), was changing the story on why he had “unilaterally and arbitrarily tampered” with the PAC Report on 1MDB.

Lim, who is also Gelang Patah MP, noted in a statement that Hasan took more than a month to come up with a new excuse. “He now claims the information provided by Bank Negara was of ‘intelligence grade’, meaning presumably of low-quality credibility value.”

Earlier, recalled the DAP veteran, the deletion from the PAC Report on 1MDB was attributed by Hasan to the information provided by the central bank being “confidential for the purpose of intelligence only and not for court usage or public consumption”.

Hasan, reiterated Lim, has taken more than a month to think of a new excuse to justify his unilateral and arbitrary deletion of the PAC Report on 1MDB “without the knowledge or consent of the PAC members on both sides of the divide”.

Nobody understands what Hasan means when he categorizes the Bank Negara information as “intelligence grade” and cannot be accepted as true unless “verified”, pointed out Lim.

He warned the PAC Chairman that it was his job to verify the truth of Bank Negara’s information by summoning relevant witnesses.

“Jho Low and the Prime Minister Najib Abdul Razak, as chairman of the 1MDB Board of Advisers, should have been summoned.”
…
Hasan’s latest denial, continued Lim, has only “fortified” the belief that there’s a high-level “cover up” conspiracy on 1MDB. “The Ministers are so prone to lie when it comes to the RM55 billion 1MDB Scandal.” 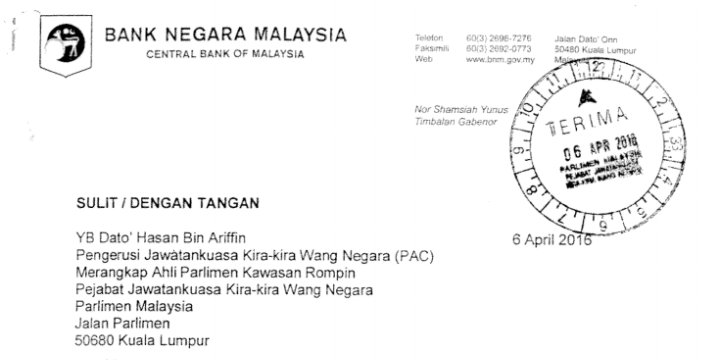 steadyaku47 comment :  Today is a good day for Tony Pua….how not to be a good day when Hasan”cari makan” Ariffin has once again proven that being stupid is not a handicap to being Chairman of PAC in Bolehland! Tony Pua was right not to under estimate what stupid people will do when they have to “cari makan!”.
Hasan cuba fikir sikit….why would Najib Razak instruct that Twit of an IGP to investigate how WSJ got their hands onto that BNM letter that confirmed that Low Taek Jho is the owner of Good Star Limited? THINK! Do you think it is because Najib thinks that that Twit of an IGP is spending too much of his time tweeting or is it because some one from BNM leaked the letter to WSJ? Aisehman Hasan, nanti orang kata Chairman PAC bodoh engkau marah pulak!  Nasib baik Najib Razak is not allergic to stupidity!
Stephen Hawking once said : “Primitive life is very common and intelligent life is fairly rare. Some would say it has yet to occur on Earth.”..,,,now how does Mr Hawking knows so much about Umno, Najib Razak and Hasan Ariffin?

Hasan is entitled to his own opinion… but Hasan, as Chairman of PAC, you are not entitled to be ignorant….or are you just having one of your “stupid days?” There have been far too many of them in the recent past!

But seriously….Is Hasan really stupid or is he pretending to be stupid? Is Hasan being stupid because that is the only way he can “protect” Najib and still “cari makan?”

Let me remind Hasan of this….Rosmah already knows that beauty fades but stupidity stays forever…..so Hasan fikir sikit before you take your brain out of neutral and open your mouth to speak!

DAP’s Tony Pua and other opposition members of the PAC had last month accused Hasan of editing the parliamentary panel’s report on 1MDB without the knowledge or approval of other members.

According to Pua, Hasan cut off a sentence from the report that said: “Bank Negara Malaysia was voluntarily informed by the country’s authorities that Good Star Limited is a company owned by an individual with no links to the PetroSaudi Group”.

“This is because BNM itself has stated that the information given is classified as confidential.

“PAC is not an intelligence unit and the information received therefore has to be authentic and true,” Hasan said.

“As the information received by PAC is classified, PAC cannot insert that information as it violates our duty and responsibilities, and can create prejudice towards many parties,” he added.
…

In a statement later, Hasan responded by saying that “the deletion of two sentences in no way affects the final report by the PAC on 1MDB”, and that the sentences were deleted because of their unclear status, or because the matter was under investigation and not for public consumption.

Linken Lim and 1 other Retweeted 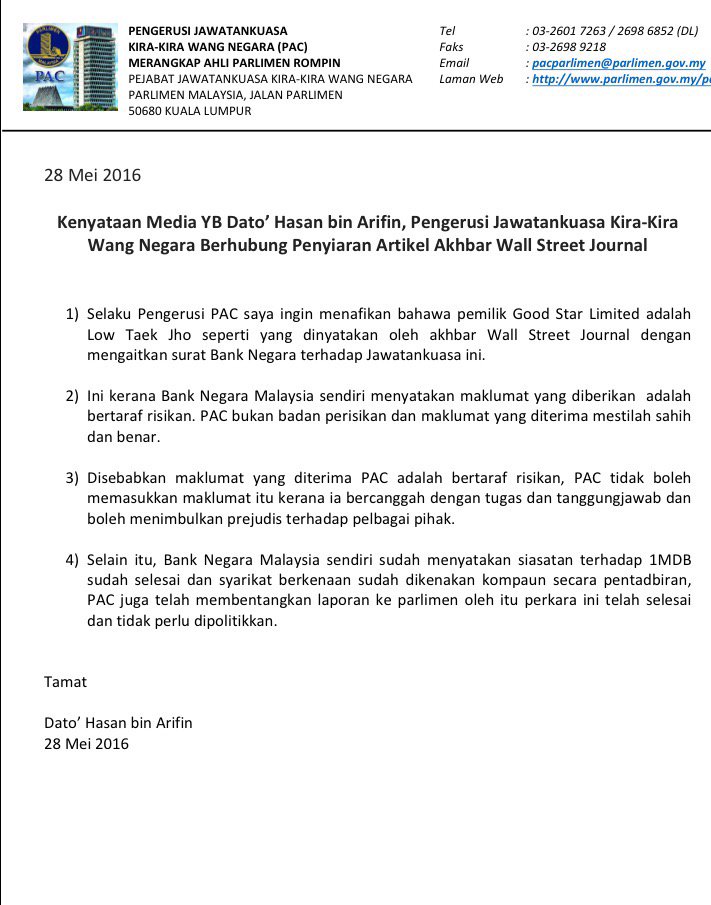