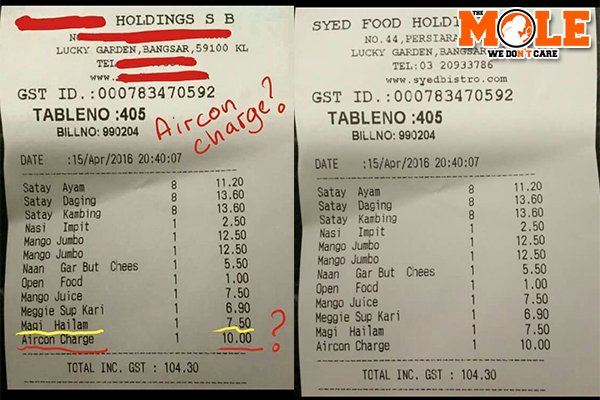 The picture of a receipt dated April 15 from a Mamak restaurant in Bangsar displaying an air conditioning charge of RM10, went viral on social media, and drew flak from the public.

KUALA LUMPUR, April 19 — The person behind the online storm over a restaurant’s RM10 fee for “air-conditioning” had been aware of the charge, the outlet’s management claimed.

According to The Star Online, the management claimed that the individual who uploaded a snapshot of the bill online had booked the restaurant’s executive dining room for a party of 10 people and used the space for over three hours.

“For their exclusive usage of the air conditioned room, we charged the customer a nominal fee of RM10 which he had requested to waive, and we waived it.

“We did a favour for the customer by just charging a nominal fee instead of a booking fee, which we waived in the end,” the management was quoted saying in the news portal’s report.

The minister said, however, that it was not illegal to charge for such a service if the customer is informed ahead.