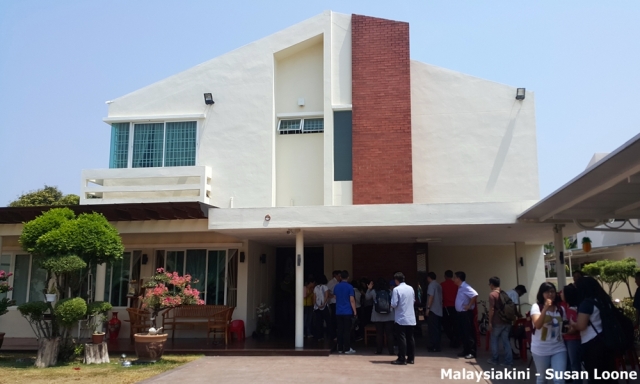 By PHUAH KEN LIN – 2 April 2016 @ 9:34 PM
GEORGE TOWN: Bukit Aman federal police headquarters has been tasked with investigations into the statutory declaration (SD) made by businesswoman Phang Li Koon over the sale of a bungalow to Chief Minister Lim Guan Eng.
.
This was revealed by northeast district police chief Assistant Commissioner Mior Farid Alatrash Wahid today.
.
“Bukit Aman has taken over the investigations from us. “We will refer the case to the Attorney-General’s Chambers next week,” he said when contacted.
.
Mior Farid said Bukit Aman had formed a special task force to handle the case.
.
He added that police had recorded the statements of over 10 people, including Phang and the Commissioner of Oaths who prepared the SD.

I got to know CM’s family since 2008. I became a close friend to his wife, Betty Chew since then because of her friendly and humble character.

In 2008, I bought a house at No. 25, Pinhorn Road, Penang for RM 2.5 million and did some renovation with the intention to let my brother live in. However after I heard from CM’s wife that she was looking for a place to rent due to termites problem at her official residence, I decided to offer them my house to stay. A tenancy agreement was entered and signed on 1/7/2009 with 3 years tenure at RM5,000 per month but later the tenure was extended to another 3 years to 30/6/2015.

At that time I felt very honoured to rent my house to Penang Chief Minister and his family and also able to help them with their house problem.

However, renting the house to them had caused me much distress and stress from the BN and NGOs alleging untrue stories about me. By then I decided to sell the house. There were also more incidents in later years from demonstrations and funeral rites held in front of the house, to even molotov cocktails bomb thrown into the house compound which make the house so exposed and unsafe.

There were endless news on the house with its address and pictures splashed all over the newspapers. I felt very uncomfortable that if my relatives or I ever decide to stay there in future, I will not feel safe and secure to stay in such an overly exposed and much publicized house.

So by early year of 2012, I had orally let CMs wife, Betty Chew know that if they were ready and willing to buy, I will sell them the house at RM2.8 million. I was told by Betty that they were interested but CM was worried that he could not afford buying the house if he was not re-elected as the Chief Minister. So Betty asked whether I would still sell the house to them at the same price of RM2.8 million after the 13th General elections.

However after the 13th general election in 2013, CM’s wife told me that they still need some time to purchase the property and she requested for an option to purchase at later date when they were ready to do so. In 2014 CM and I then executed an agreement dated 23.6.2014 whereby I agreed to grant him a 5 year option tenure to purchase the said property at RM2.8million in consideration of CM paying me RM100,000-00. Pending exercising of the option, I shall continue to allow CM and family to continue renting the said property.

Sometime before the extension tenancy was up in 30/6/2015, I had made up my mind to dispose off the property for good. I am a businesswoman and I do not wish to tolerate unnecessary stress and have my name splashed all over the newspapers or social media again and again especially when those insensitive people want to attack CM or raise issue on the Taman Manggis land which I am not involved. I decided to sell the property because it attracts so many unnecessary publicities and allegations from time to time.

I had again asked CM’s wife, Betty to request CM to exercise the option to purchase. I did not survey the market when I decided to sell to CM in 2015 because I didn’t think it was necessary. I already have CM as a buyer and there was an understanding pursuant to the Agreement dated 23.6.2014 pertaining to the agreed sale price.

After CM’s wife, Betty told me that they have managed to secure a house loan, we decided to sign the sale agreement at the price we agreed earlier; i.e RM2.8mil. From my records the sale & purchase agreement was signed on 28.7.2015 and the bank released the full loan sum in October, 2015.

CM and his family had been my good tenants for the last 6 years. To me, CM is a respectable leader and I feel very honoured to sell my property to him. I think Penang has done well under his administration. Most importantly I have sold my property to the person I respect. I have no regret of selling my property to CM at RM2.8million. I have cleared myself of unnecessary headache and stress.

I do not understand why my agreement to selling the house to CM has been blown up to such a big national issue when I have no business dealings with the state government. Neither have I obtained any benefit from the state government by selling the house to him. It is my decision at what price I want to sell to the CM. I stress that I was not pressured or forced or under any undue influence by CM or any party to sell the house to CM at RM2.8 million. I sold at my own free will on a willing buyer and willing seller basis.

I also wish to clarify here that I am not a director nor shareholder of KLIDC company which has successfully bid for the Taman Manggis land under an open tender. I am also not involved in the management of the company. I reserve my right to legal action against any party should they try to make unnecessary connection to complicate the matter and drag me into this controversy.

And I make this solemn declaration conscientiously believing the same to be true and by virtue of the provisions of the Statutory Declaration Act 1960. 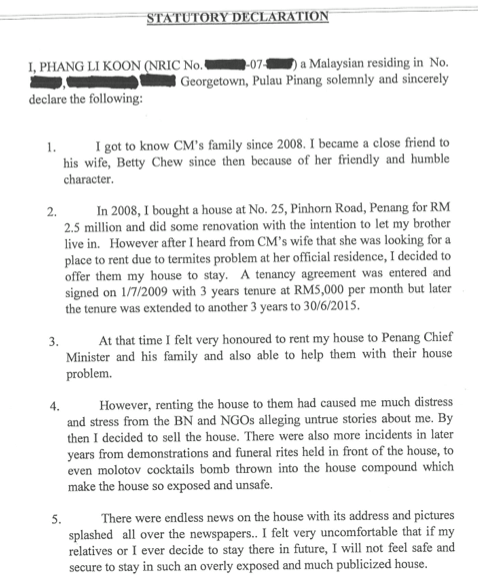 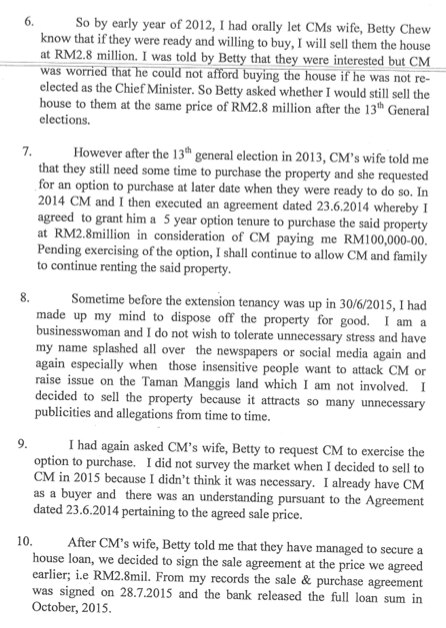 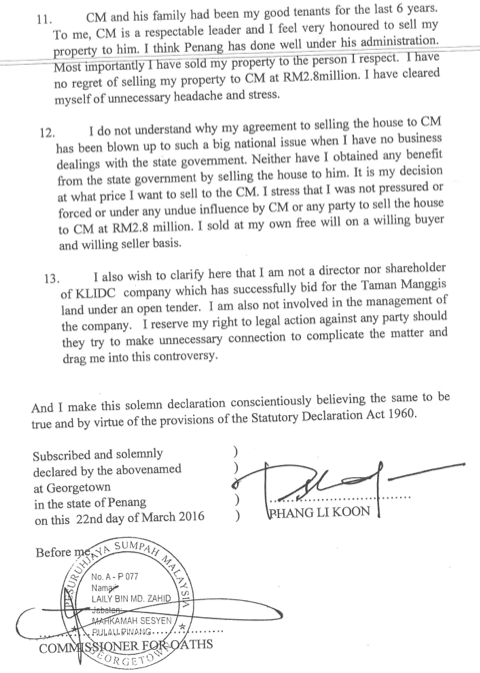 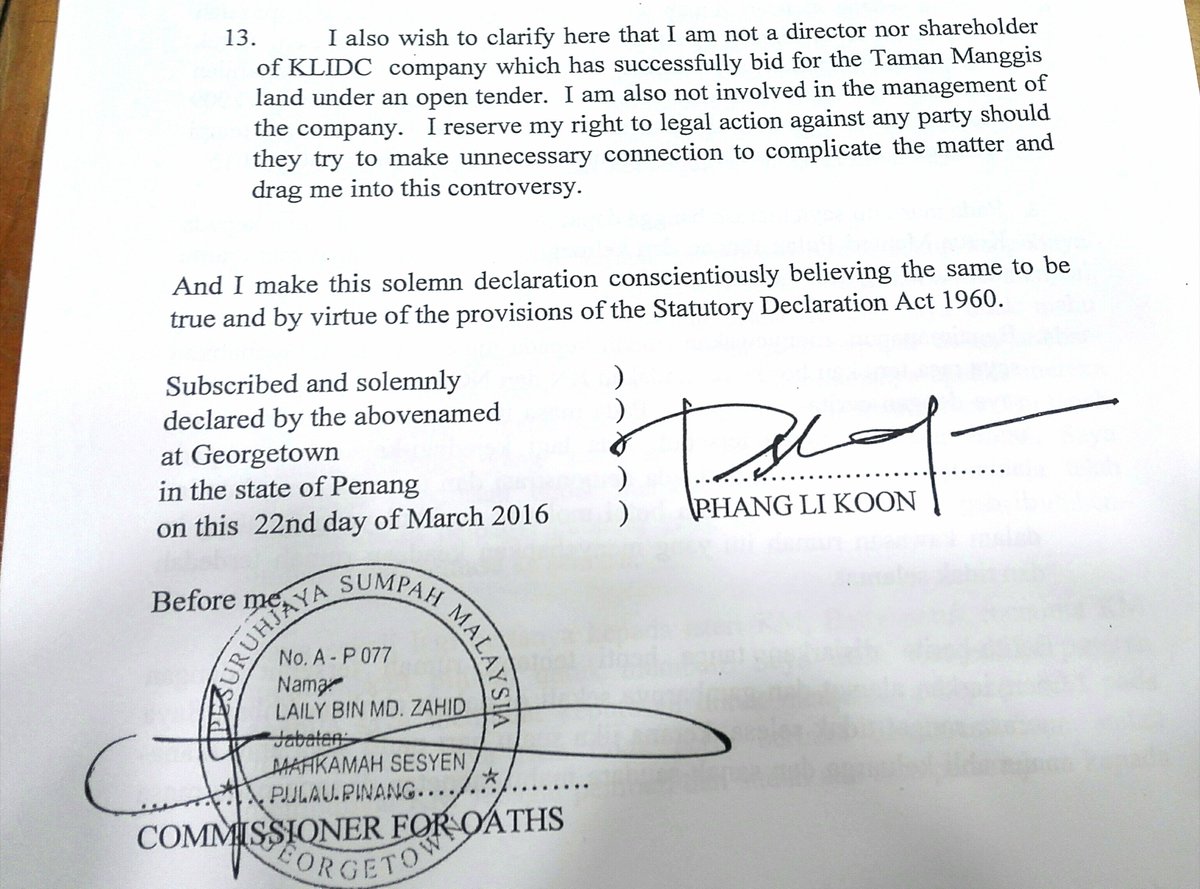