Posted on February 4, 2016 by weehingthong

Deputy Home Minister Nur Jazlan Mohamed attributes this to the reduction in the number of foreigners wanting to come to work in Malaysia.

KUALA LUMPUR: Blogger Papagomo has been fined RM4,300 for three counts of assault of a foreign worker. 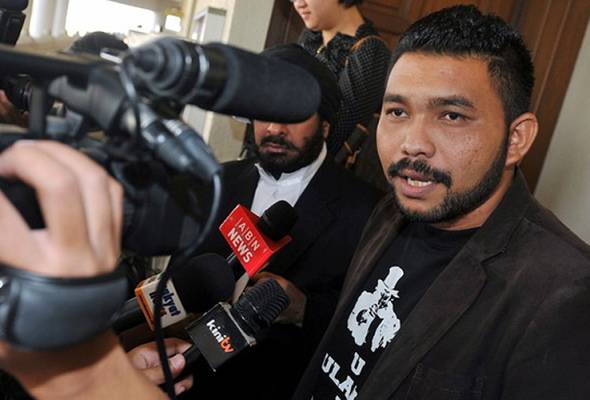 The controversial blogger, whose real name is Wan Mohd Azri Wan Deris, nodded when asked if he understood the nature of all three charges before Magistrate Husna Dzulkifly here on Friday.

Court proceedings have been adjourned until 2.30pm as technical difficulties were encountered when trying to replay a video of the alleged assault.

He was charged under Section 323 of the Penal Code, which carries a maximum of one years’ jail, a fine or both if convicted.

Papagomo to be charged with assault tomorrow: PETALING JAYA: Controversial blogger Papagomo will be charged at… http://bit.ly/1YBqSn8

Papagomo to be charged with assault tomorrow

PETALING JAYA: Controversial blogger Papagomo will be charged at the Kuala Lumpur magistrate’s court on Friday with allegedly assaulting a migrant worker.

He is expected to be charged at 9am at magistrate’s court 9.

Papagomo, whose real name is Wan Mohd Azri Wan Deris, is seen slapping, punching and kicking a Pakistani worker in a four-minute Facebook video that has since gone viral. 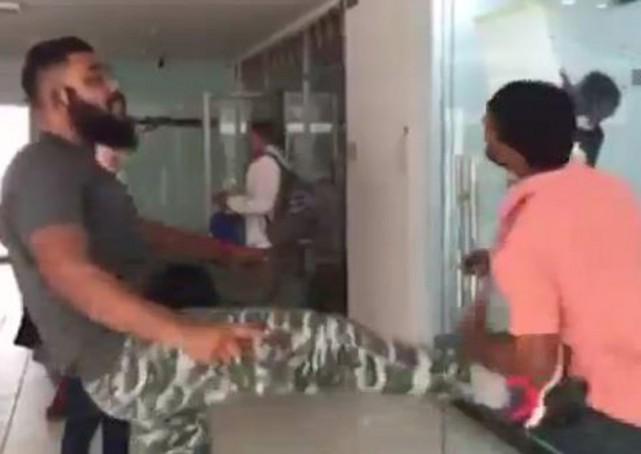 …
Inspector-General of Police Tan Sri Khalid Abu Bakar said investigators had interviewed Papagomo, whose real name is Wan Azri Wan Deris, and asked him to co-operate by leading them to the victim.

He was responding to public comments that the police were too lenient and stressed legal procedures must be followed.

“We cannot be emotional. We cannot simply make arrests because somebody was seen beaten up in a video. This is to ensure fair justice. Be patient. Action will be taken,” he said.

Ramkarpal Singh and 3 others posted about this. 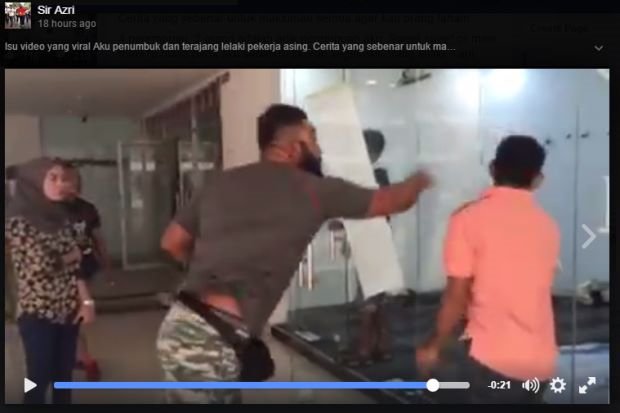 This is the full version papagomo acting gangster hit and kick foreign nationals.. Turns out he brought the gang too.. He told the world one doing it because he didn’t believe in the ability and capability…. Polis Diraja Malaysia (Royal Malaysia Police) It is a reality police humiliating…. Not defending juvenile offenders…. Our country a nation of laws… There’s a constitution and laws and sparkle law enforcement side…. Kind of irritated angry and no matter where we are…. Need to submit to the authorities to take action and follow channel paid off the constitution and not take action in the hands of myself… Pdrm side must weir symptoms like this…. Tenkiu
Faith in God
Loyalty to the king and country
Constitutional Keluhuran
Sovereign laws
Decency and propriety

He said the police would act on the matter accordingly after identifying and recording a statement from the victim, who is believed to be a foreign worker.

“My men are acting on this…They are identifying the victim and then will act,” he told reporters when asked about the latest development in case. 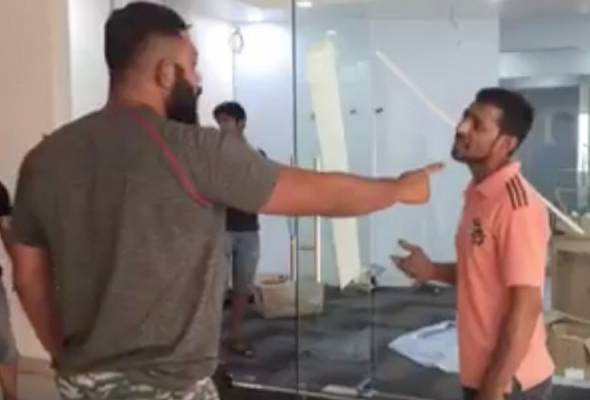 Papagomo, who made you judge, jury, and executioner?

YOURSAY | ‘Start with bashing a Pakistani, next a Bangladeshi, then a Nepali. What’s next?’

Vijay47: Blogger Wan Muhammad Azri Wan Deris aka Papagomo, assuming that your sisters were indeed harassed and you had taken immediate action against the perpetrator even to the extent of giving him a couple of slaps, perhaps nobody would have faulted you.

But in this case, you conducted an identification parade where the workers actually came forward when you called and not run away if they had been guilty.

The man you assaulted was about half your size and you also had a hefty accomplice with you. Who gave you the authority to be judge, jury, and executioner? Why did you not hand them over to the police?

Strange you should say the police would not have acted; the inspector-general of police would have at least made some Twitter offerings. Then again, maybe you feared the attorney-general in his absolute divine discretion would have ruled that no offence had been committed.

Equally strange is that you took offence at the man using God’s name. But isn’t that the standard operating procedure especially within Umno circles. Remember convicted murderer Sirul Azhar Umar?

Anonymous 560221439180274: Who is Papagomo, even if he had been a police officer, to hit a Pakistani who is accused of harassing his sisters and her friends?

What is the proof the sisters and friends have had been harassed? He has no right to take the law into his own hands.

The police must charge him for not only threatening but assaulting a person. And what if the individual had not committed what he was accused to have done, and besides who is Papagomo to demand that the man to leave the place for good.

The actions of this man have all the signs of a full-fledged thug and racist. From a domestic nuisance, this man has now gone international.

The Pakistani embassy officials in Malaysia must force the Malaysian government to probe and take appropriate action against Papagomo.

Tan Kim Keong: Papagomo should have made a citizen’s arrest and lodged a police report instead of unleashing slaps, punches and kicks on the alleged perpetrator.

What he did was plainly displaying the behaviour of a violent man. He should be charged for assault and battery.

Ferdtan: What if every person is allowed to take the law into his or her hand? Oh, I forgot, it can happen, that is if you belong to a certain ‘supremist’ party where crimes can be committed with impunity.

There is such thing as reporting an alleged to the police. Maybe Papagomo thought he is still a police officer.

What had happened is only his version of the story. There are two sides of the coin; that is where the police come in to determine the wrongdoer.

Doesn’t Papagomo trust the ability of his former peers? How sad, coming from an ex-police colleague.

KayL: This exact mentality is evident in many Malaysians from cashier clerks, to government servants, to road users.

They are the result of a belief one’s own supremacy without having to prove that they are deserving of that supremacy.

Anon1: Start with a Pakistani, next a Bangladeshi, then a Nepali. What’s next? Any race you deem inferior to yours?

If the police don’t take any action against this coward, they are indirectly endorsing such actions by others – all in the pretext of defending their pride.

The above is a selection of comments posted by Malaysiakini subscribers. Only paying subscribers can post comments. Over the past one year, Malaysiakinians have posted over 100,000 comments. Join the Malaysiakini community and help set the news agenda. Subscribe now.

These comments are compiled to reflect the views of Malaysiakini subscribers on matters of public interest. Malaysiakini does not intend to represent these views as fact.

COMMENT The Papagomo video in which he assaulted a foreign worker has stirred feelings of persistent outrage and disgust.
…

Where does vigilantism lead?

The cornerstone of a civilised state is the principle that the state holds the monopoly on the means of violence.

In other words, in a civilised state, only legally recognised agents of the state are supposed to be allowed to employ violence of any sort, a course of action strictly forbidden to other people in the state (except, again, in the scenarios suggested above).

Any other type of approach towards the legitimacy of violence is essentially a return to a feudal, law of the jungle type of situation, where we would need to be perpetually prepared for violence between ourselves and people we don’t like, or who don’t like us.

That is exactly where the road of vigilante justice leads – an end that is closer to chaos and anarchy than it is to civilisation as we know it.

Police will take action against blogger who allegedly assaulted foreigner

SUBANG JAYA: Police will take action against a man who allegedly assaulted a foreign worker.
…

Deputy Inspector-General of Police Datuk Seri Noor Rashid Ibrahim said although Muhammad Azri’s action was to protect his sister, it did not mean he could take matters into his own hands.

“It is against the law to do so.

“It doesn’t matter whether the victim is a foreigner or local. If you intentionally assault and inflict harm on anyone, police will take action on you,” said Noor Rashid, during the officiating ceremony of Op Selamat 8/2016 at Litrak Toll Plaza, Bandar Sunway.

Noor Rashid also said that Muhammad Azri undermined police when the latter allegedly claimed that police would be slow in taking action against the perpetrator had he lodged a police report instead of taking action himself.

PETALING JAYA: Blogger Papagomo is in the limelight once again, after a video of him allegedly assaulting a foreign worker was widely shared on social media.

Papagomo, whose real name is Wan Mohd Azri Wan Deris, is seen slapping, punching and kicking a Pakistani worker in a four-minute video that has gone viral.

He also threatened the worker and told him that he did not want to see him again at the location, which is unknown.

He told the worker’s supervisor that he would bash up the worker if the man did not go away.

Papagomo also uploaded the video on a Facebook page Sir Azri, justifying his assault of the worker on Jan 29.

The video had over one million views with more than 24,000 shares.

He claimed that the worker had sexually harassed two of his younger sisters and two of their friends.

He said that they were able to identify the perpetrator, thus taking action in his own hands, and “doing what an elder brother is supposed to do”.

“It’s not that I don’t believe in the police but it takes a long time to bring foreign workers to the station and to get justice. It’s worse if the worker runs back to their country and the case becomes NFA (No Further Action),” Papagomo claimed.

“I as a brother took my own action, which to me is a lesson that needs to be given to those who sexually harass others,” he added.

For Papa Gomo, UMNO’s super sex blogger, when it rains, it pours!

Like Loading...
This entry was posted in Uncategorized and tagged papagomo, video: papagomo hits foreign worker pakistani. Bookmark the permalink.