ALOR SETAR: A female clerk with the state Road Transport Department (JPJ), her husband and two other men have been arrested in connection with a cloned car syndicate.

The 31-year-old woman is believed to have assisted the syndicate to “legalise” luxury cars, meant for the scrapyard in Singapore, to be brought in and sold as used cars that were auctioned by the Customs.

It is learnt that more than 100 units of the cars, including Mini Cooper, Toyota Wish, Toyota Vellfire and Toyota Estima, were involved.

The woman, attached to the vehicles registration division of JPJ at Jalan Suka Menanti and her husband have been remanded for seven days from Sept 21 to facilitate the investigations.
…

Investigations revealed that the clerk and her husband received “commissions” of between RM2,000 to RM5,000 for each car sold, some via online. 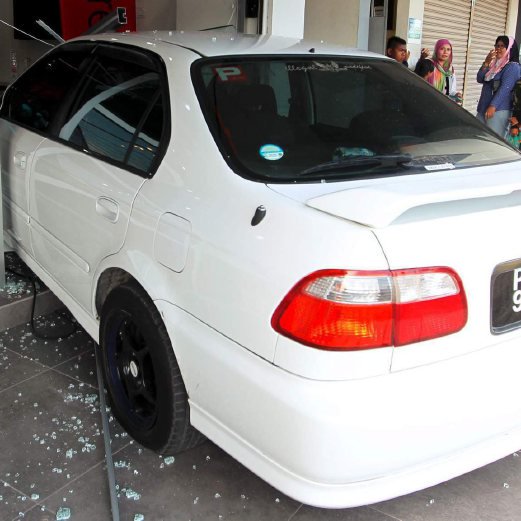 Seberang Perai Selatan police chief Supt Shafee Abdul Samad said the drama unfolded at about 5pm when police flagged down a car at the toll plaza but the driver sped off in the direction of the island.

“The man sped off to the island while a police patrol team gave chase. He later used the same bridge to exit to Taman Verrapen in Jalan Bukit Panchor,” he told Bernama here today.

When reaching Jalan Bukit Panchor, the man’s car rammed into a Proton Saga causing injury to the driver of the car, a pregnant woman.

Shafee said following the accident, police detained the 24-year-old driver of the Honda Civic and initial investigations revealed that he was driving a cloned car. 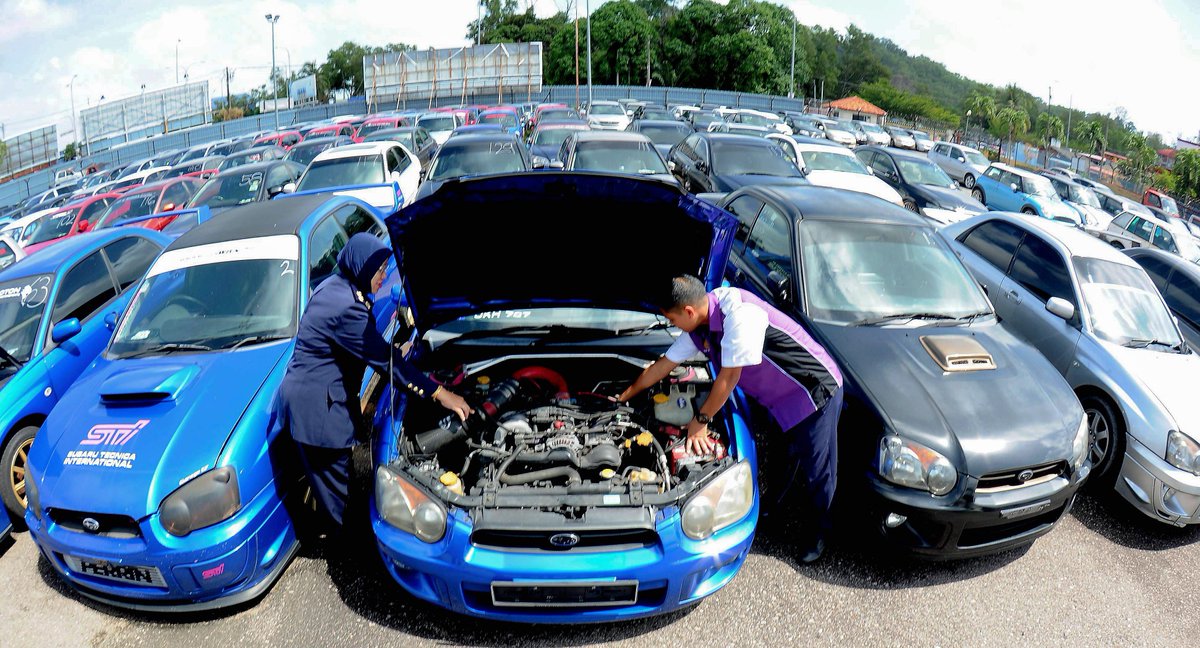 KUALA TERENGGANU: The Road Transport Department seized 22 cloned cars, including luxury models worth RM1 million over the past two months.

“This the result of people dreaming of owning luxury vehicles which they can ill afford with their income. Thus, they take the easy way by purchasing cloned vehicles that are sold at low prices.

“For instance, a cloned Honda Odyssey is sold at around RM12,000 compared with the original price exceeding RM100,000,” said Rahman.

OHOR BARU: A 26-year-old man driving his wife in a flashy BMW ended up being nabbed for their alleged links to a cloned car syndicate.

The couple were on their way to deliver the BMW to a buyer here on Thursday night, said Road Transport Department (JPJ) director-general Datuk Seri Ismail Ahmad.

He said the BMW was brought into the country from Singapore before it was given a registration and chassis number of ano­ther car that had been reported as total loss.

The couple, he said, were part of a local syndicate which worked with their Singaporean counterparts to bring in such vehicles into Malaysia.

“The vehicles are then sold to client­s at prices ranging from RM20,000 to RM30,000 depending on models like BMW, Lexus, Mercedes, Honda or Toyota,” he said after handing out appreciation awards to 21 south zone JPJ officers here yesterday.

Three policemen detained by MACC over resale of cloned cars

SEREMBAN, Feb 16 — Three policemen from the Police’s Criminal Intelligence Branch (D4) were detained by the Negeri Sembilan branch of the Malaysian Anti-Corruption Commission (MACC) in connection with a case involving the re-selling of cloned cars.

According to an MACC statement here today, the trio, aged 36, 54 and 27, who were stationed at the Negeri Sembilan Police Contingent headquarters, were detained at 2.30pm at a restaurant near here.
…
The three suspects are expected to be brought to the Seremban Magistrate’s court tomorrow to be remanded.

However, when contacted, State Police Chief Datuk Jaafar Mohd Yusof could not confirm the arrests. — Bernama 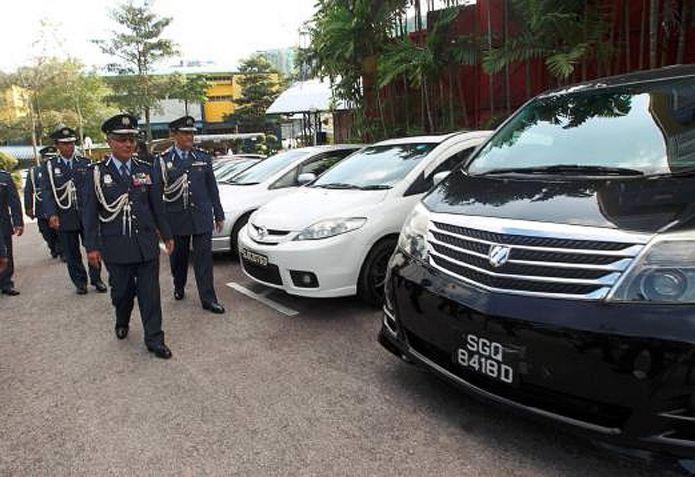 SUPPLIER OF CARS FOR CLONING IN MALAYSIA? All 26 cars were seized in Taman Laguna, Johor Baru.

JOHOR BARU – A Singaporean housewife has been detained by the Johor Customs Department over the alleged smuggling of used luxury cars from the republic.

State Customs director Datuk Ramli Johari said the suspect, in her 20s, was nabbed at her house in Taman Laguna at around 3pm on Jan 20.

He said enforcement officers from the Department had seized three luxury cars parked inside the compound of the woman’s house.

“We have been monitoring the case for quite sometime and believed that the suspect is one of the masterminds of the syndicate selling used luxury cars from Singapore,” said Ramli.
…

Ramli said 23 Singapore-registered vehicles were also seized after the suspect revealed that they were parked in the housing estate.

“The permits of the Singapore-registered cars are already expired and they should be sent as scraps in the republic,” said Ramli.

OF CLONED CARS AND BAD LUCK.

What is the probability of meeting up with the owner of the genuine car when you are driving a cloned version? His luck must be the worst in Malaysia! 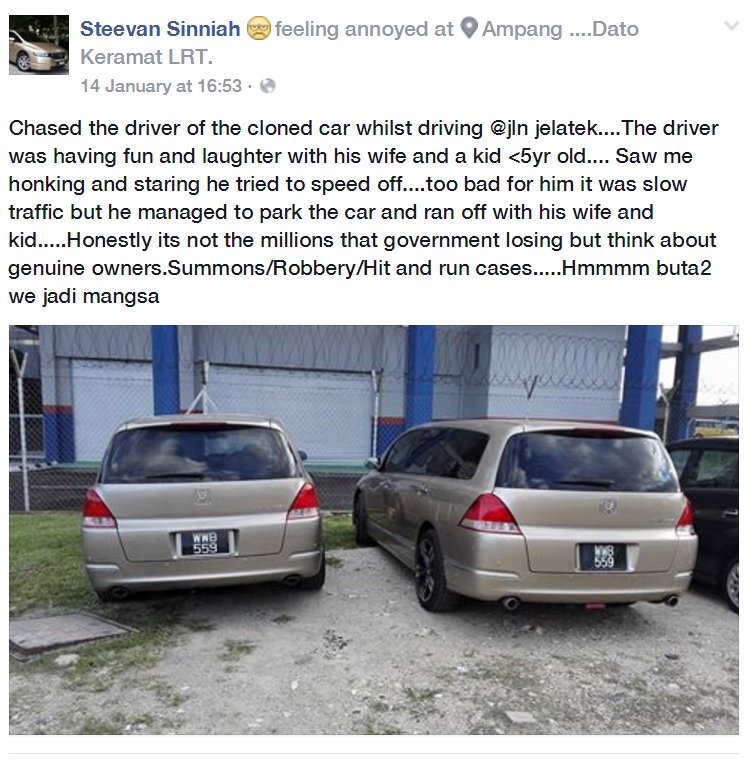 KUALA LUMPUR: Steevan Sinniah thought he was seeing double as he stared at a car which was completely identical to his own while stuck in a crawl on Jalan Jelatek.

He had been admiring it when he realised that the car was not only identical in colour and specifications, it also carried his car’s registration number.

Dumbstruck, he watched a man, a woman and a child laughing in the car.

Then in a split second it all clicked as Steevan remembered getting a perplexing Road Transport Department notice stating that his Honda Odyssey had been confiscated in Kelantan two months ago.

But at the time, the car was safely parked in his driveway.

And despite not knowing where Kuala Muda was, hadn’t he received a summons for obstruction of traffic in the Kedah district three years back?

As the initial shock wore away, Steevan sprang into action. “I honked at him and his expression totally changed.

“He panicked and moved to the right lane which was a turning lane. I tried to block him but failed and there was a policeman there and since he was ahead of me he managed to give me the slip by turning into a lane,” said Steevan.

The 43-year-old accounts manager in a communications firm however managed to find the car at the Datuk Keramat LRT station some 400m away, where it had been abandoned.

His worst fears were confirmed.

The car was his Honda Odyssey’s twin except for the fact that the road tax sticker was issued by “MEYG” instead of the MyEG(My E.G. Services Bhd), the electronic service provider.

Steevan reported the incident to the police on Jan 2.