Have a laugh at Eunoia or You-know-ya, Singapore’s newest Junior College!

It became the most searched term on Google.sg on Tuesday, after the announcement about Singapore’s newest junior college, Eunoia JC.

The Ministry of Education (MOE) said the name was derived from a Greek word and pronounced as ‘yoo-noh-iea’. Officials said it means “beautiful thinking and goodwill towards others”.

But netizens were far from impressed. “Pretentious” was among the kinder adjectives used in online reaction to the news.

People have also started questioning the official version of its pronunciation and meaning.
..

Author and Greek national Kostas Ikonomopoulos, 39, said: “In the years before Christ, the word could have been pronounced slightly differently, but today, it is pronounced ‘ev-nee-ah’, with the first ‘e’ as in ‘epic’.”

Both he and a Greek and Latin teacher, Mr Tai Yu Hsiang, 36, who has his own language school here, noted that the meaning of the word means “favouring someone or extending goodwill to someone”.

I would say, most of the netizens have no negative intentions, just like we never had any ulterior intentions in naming our school – why would we want to do that?

Why would we want to be pretentious, or why would we deliberately want to cause confusion to taxi uncles?

We only had one single intention, and that is to have a name with a good meaning behind it.

Eunoia means beautiful thinking and goodwill to others.

Its meaning points toward one of the key tenets of the College vision — of how a “Thinker with Heart” is essentially someone with a beautiful mind and a deep reservoir of goodwill towards others around him.

The name represents the College’s commitment towards nurturing every graduate of the College in exemplifying a strong sense of eunoia, which would act as a solid anchor for his pursuit of excellence as a “Youth with Purpose” and a “Leader with Courage”. 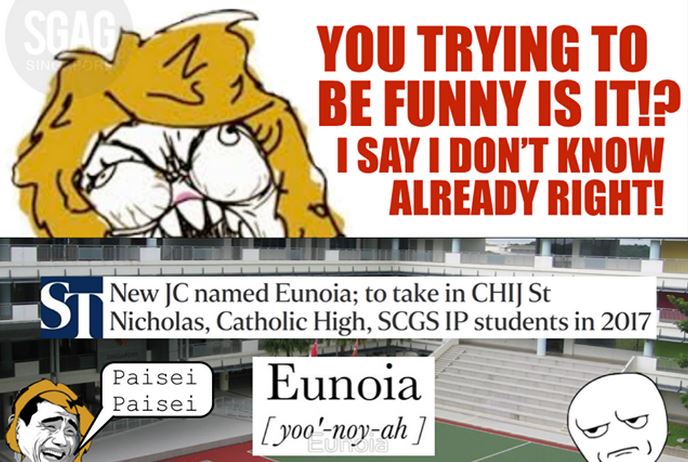 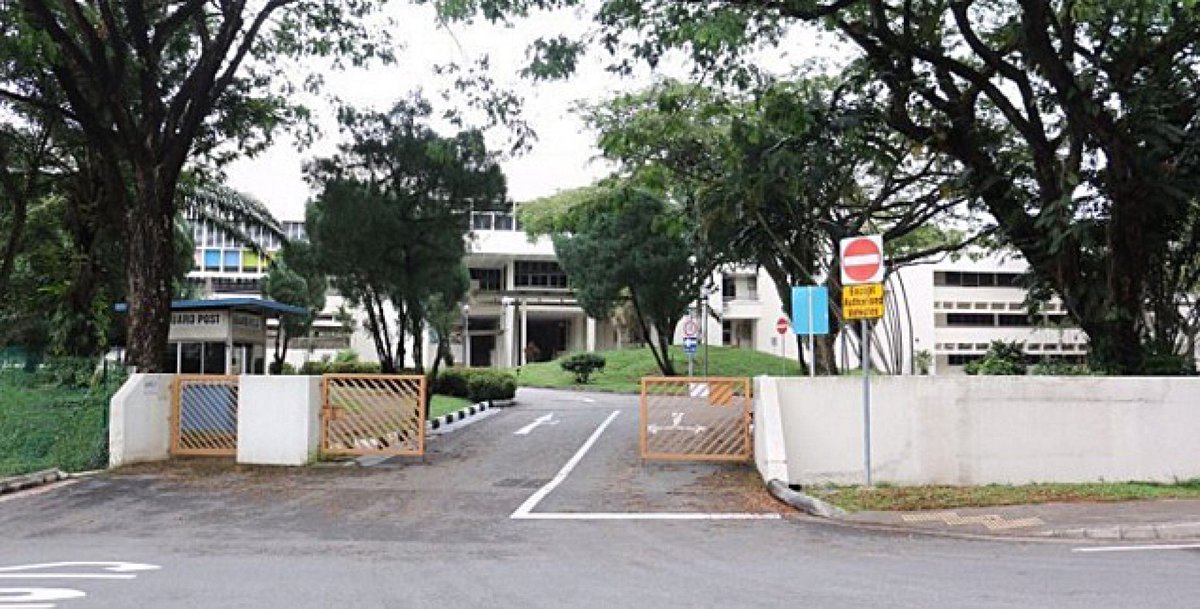 Thanks for your creative interpretations on how to pronounce the name of our newest JC – Eunoia.

You know ya, it’s an English word which comes from the Greek word ‘εὔνοια’. It means ‘beautiful thinking’.

You know ya, it is not pronounced ‘you-know-ya’.

So the next time someone asks you what the name of the new JC is, don’t say you don’t know, ya?

Singapore’s newest JC is called Eunoia – you know, ya?

Eunoia, the name of Singapore’s newest junior college, has generated much buzz – and a lot of head-scratching over how to pronounce the name – even before it opens in 2017.

It was the top Google search by users in Singapore on Tuesday (Dec 29), with more than 10,000 searches. There was even an online petition to change the name, which garnered more than 150 signatures before it was taken down on Wednesday.
…

On The Straits Times’ Facebook page, the top comment – with over 500 likes – was a joke by user Yi Heng Teo on the conversation between a son and his mother discussing the JC’s name.

So apparently the students will be called… Eunoians #Eunoia 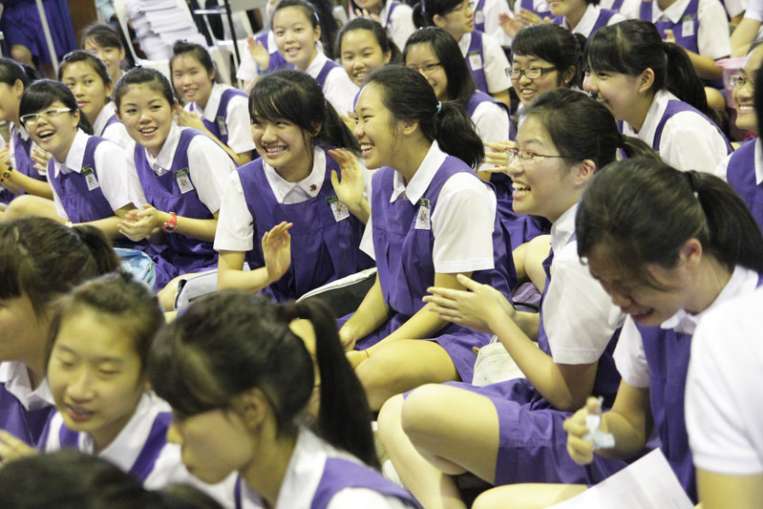 Is it me or are names of new schools in Singapore getting more pompous and ridiculous?

First it was Innova Junior College, now there is Eunoia. A name that will surely annoy ya.

And within 24 hours of its announcement, it already has.

Facebook and other social media platforms are exploding with negative comments, snarky remarks and cruel memes about the new name, and an online petition has been swiftly put up.

Anyone can see why.

To me, “eunoia” sounds like an awkward cross between “urine” and “ammonia”.

I cannot fathom how it will be worked into a school song, seeing that it rhymes with “paranoia” and “euthanasia”, which will probably be buzz words for the poor kids of the new junior college, which will take in Integrated Programme students from Catholic High School, CHIJ St Nicholas Girls’ School and Singapore Chinese Girls’ School.

That is, if they can even pronounce the damned word to start with.

So there’s going to be a new junior college and it’s name looks set to go viral. #singapore #eunoia 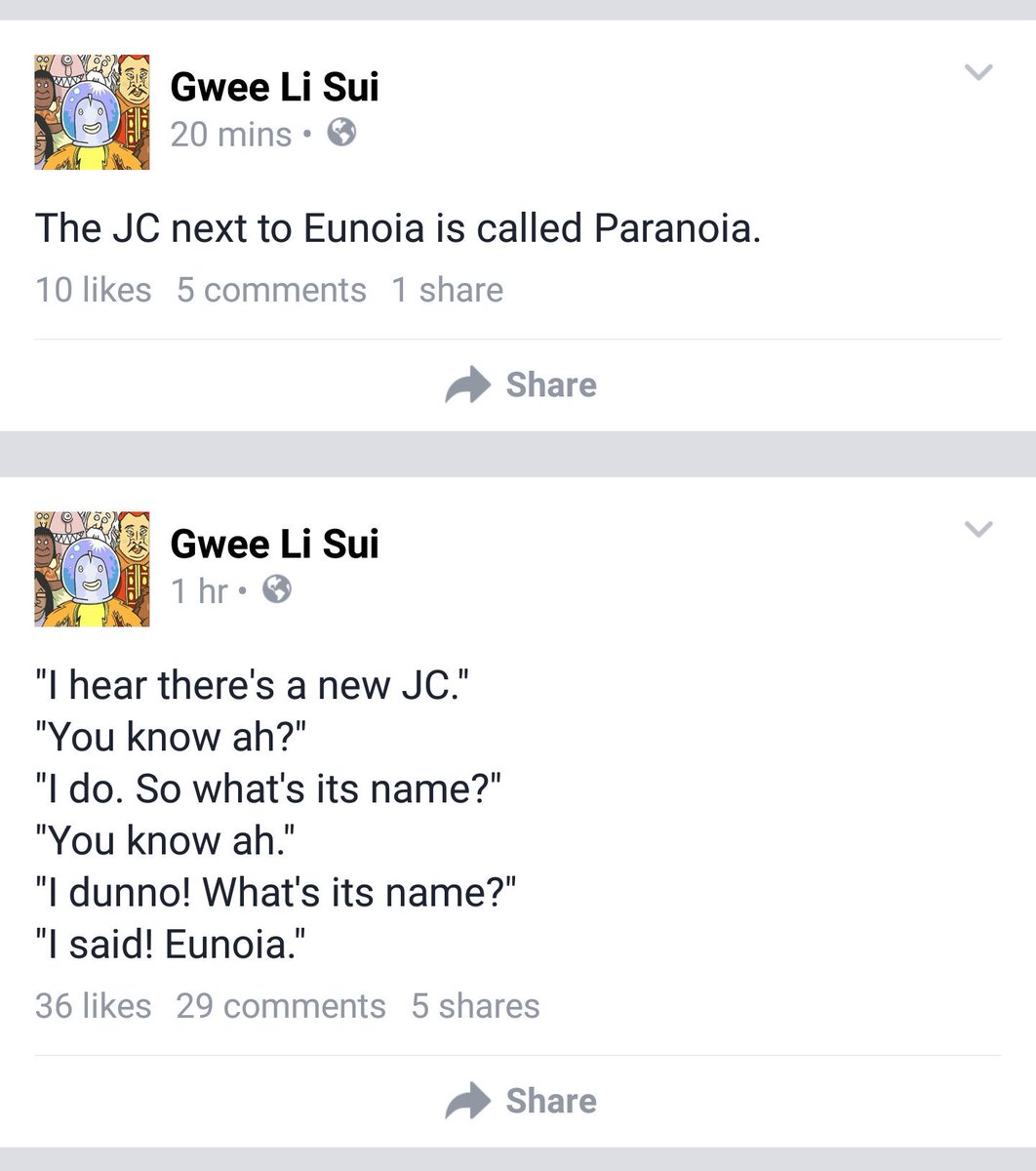 That there must have been a major committee deciding to brand a new junior college with a name that rhymes with ‘you annoy ya’.. #eunoia