Too many Datuks, fake and real…

Do you think titles motivate politicians to work harder?

What did some Datuks do to earn the title?

Today, “Datukships” are being handed out like nobody’s business. The titles come a dime a dozen and in numbers that are beyond comprehension.

From people who are in their late teens to heads of organised crime. From yuppies to ah longs. From stock market manipulators to kleptocrats. From people who write to the US attorney-general to people who beat up others when they do not want to pay for a RM3 parking ticket.

The once revered title has lost its value. It is as simple as that.

When I was growing up and our family had to visit a Datuk for Hari Raya or Chinese New Year, you would be nervous. You would fear the little conversation he might have with you even if it was as simple as “What do you want to be when you grow up?”

The Datuk held sway over all and sundry and you could not help being in awe of such a distinguished person. Not any more.

This year, the federal government led by Dr Mahathir Mohamad did not confer any titles on anyone in conjunction with our Agong’s birthday celebration in September.

Sabah, which is now led by Warisan, however, created 65 new Datuks in conjunction with the TYT’s birthday.

Among them were three DAP state ministers who spent the last decade as opposition members. What they contributed to the well-being of Sabah in the six months since coming to power to earn the Datukships is questionable and leaves much to be desired.

Nonetheless, they have to bear with the public ridicule that comes with it.

Melaka too created new Datuks, five of whom were newly-minted federal ministers.

On what basis they were recognised for their contributions to society is anybody’s guess. Whether they “earned their stripes” is best left to the imagination.

But one fact remains: if there are people out there who believe that by being a Datuk you automatically command respect, you are sadly mistaken. Respect is something you earn. You cannot buy respect. Nor do you earn respect because of political patronage. At best, it’s good for the ego and it might just open certain doors for you. But it is not an exclusive door anymore as more and more Datuks join the assembly line.
.

Clement Stanley is an FMT reader.

The views expressed are those of the author and do not necessarily reflect those of FMT.

If accepting state awards is up to the individual, it is up to us, also as individuals, whether to address the individual according to the title that comes w/ the award.

So, here we go, is she Cik or Puan Rina?

KUALA LUMPUR, Jan 18 — The Regent of Pahang, Tengku Abdullah Sultan Ahmad Shah is upset with the actions of several people including artistes that broke the law after receiving Datuk and Datuk Seri titles.

Harian Metro reported that the regent wanted individuals who have been bestowed with the titles to return them themselves because it was more polite to do so.

“All these individuals that received Datukship should be ethical and be aware of the terms that follows when wearing the titles.

“If I followed my heart, I would want to take back all the awards because I am very disappointed with individuals behaving like this,” he was quoted as saying.

Tengku Abdullah was commenting on the case of Datuk Farid Kamil Zahari who claimed trial on Tuesday after he was charged with assaulting a policeman and another civilian.
.
Farid received the Darjah Indera Mahkota Pahang at Istana Abu Bakar, Pekan on December 16.

Q: Tuanku, Johor is known for its reluctance to give awards. What is your response to talk by Malaysians that there are far too many Datuks in Malaysia?

I do not want to talk about other states. People talk about buying awards.

I do not want to go into that but I can tell you that in Johor we do not confer awards easily.

If too many of such awards are conferred, they lose their value. People will no longer respect you; people will ask which state did you get the awards from and the institution will suffer in the long run.

We do not want Malaysia to be a country with the most titled people. For sure, it will not happen in Johor as long as I am around.

They paid for fake titles

JOHOR BARU: A group of businessmen here learnt a costly lesson after they were duped into paying a total of RM1.3mil for fake titles of Datuk and Datuk Seri.

The group, believed to number a dozen, had paid a man claiming to be a member of the Perak royalty for the awards last year.

It is understood that there was an “investiture ceremony” at a posh hotel in Perak at the end of last year, during which the businessmen were “awarded” the medals and titles.

Since then, the businessmen have been using their titles in their dealings and on their name cards, with some placing the Datuk emblem on their cars.

Recently, one of the businessmen suspecting that something was amiss, decided to check with the Perak state secretary’s office and found that the titles were not recognised by the state government.

The businessman, in his 50s, lodged a police report upon further discovery that the so-called member of royalty was actually a bankrupt who had used their money to settle dues with the Insolvency Department.

Police have started an investigation into the case, arresting two people, including a man claiming to be a Datuk, so far.

Police believe there are others who may have been cheated by the suspect. They are urged to lodge reports. 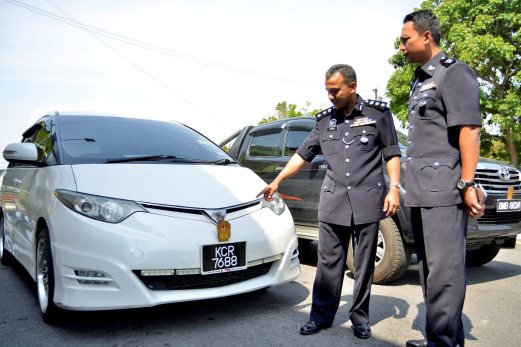 KLANG : A 49-year old man has been nabbed by the police after posing as a ‘Datuk’, here, on Tuesday.

The suspect was arrested at Jalan Rodat in Bandar Bukit Tinggi, at 9pm. Klang Utara district police chief ACP Mohd Yusoff Mamat said a police report was lodged by a 50-year-old school teacher when he became suspicious of the ‘Datuk’ after they joined together to run a canteen tender business, in 2013.

Mohd Yusoff said the victim had not received any profits over the past three years.

“During investigations, police confiscated two vehicles, a Toyota Estima worth RM170,000 and a Toyota Hilux worth RM90,000.

“Both of the vehicles belong to the victim. However, these cars were given to the suspect to be used for business purposes,” he said at a press conference held at police headquarters here.

Fake Datuks beware, you could be found out soon!

Illegitimate title holders may be “embarrassed” after being exposed as fakes following a government initiative, says MCA man.

KUALA LUMPUR: Illegitimate Datuks may soon become the butt of jokes when they are exposed as fakes now that the government is in the midst of compiling a list of legitimate title holders.

Therefore, MCA Public Complaints Bureau chief Michael Chong has advised the public not to purchase or accept Datukships from bogus sources, to avoid embarrassing themselves in the future.

“The government will soon start keeping a record of legitimates Datuks who received their titles from the Yang-Dipertuan Agong, Sultans or Governors, and fake ones will be exposed when that happens.

“If you bought your title or was awarded by illegitimate sources, your friends will still call you Datuk because they are not aware. But what should they call you when they find out that your name is not in the official list,” The Sun quoted him telling a press conference yesterday.

Chong said he had received many complaints and inquiries from the public, asking if a person’s title was legitimate or not.

According to him, laws to address the scourge of fake Datukships was already in the works.

Chong said this is because the government will soon start keeping a record of legitimate Datuks who received their titles from the Yang Di-Pertuan Agong, Sultans, or Governors, and fake ones will be exposed when that happens.

Kuan Chee Heng shared his photo.
12 hrs · Edited ·
Arresting without hurting the suspect. Although he put up a very fierce struggle, I just told him Dato, look here, its finish. You do not make things more complicated for yourself. He understood me and he said sorry. I am an old man, so I never hit him as I believe in section 15 ( 2 ) of CPC. He is still in one piece when he reached police station.

5 cakes in 1 time in my car for 3 different Datuks. The scariest task ever

Like Loading...
This entry was posted in Uncategorized and tagged datukships, fake datuks, real datuks. Bookmark the permalink.

1 Response to Too many Datuks, fake and real…