#MARA in Australia: Dudley House and other property deals. #Maragate 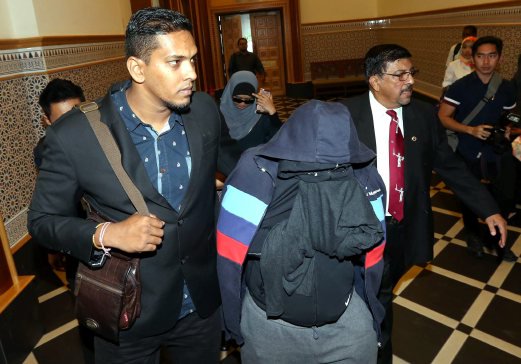 PUTRAJAYA: Two former Mara Incorporated Sdn Bhd (Mara Inc) senior officials and a company director remanded for investigation on the purchase of property in Melbourne, Australia have been released on bail.

The trio were released on Malaysian Anti-Corruption Commission (MACC) bail of RM10,000 in one surety each by the Magistrate’s Court today.

The former chairman and former chief executive officer of Mara Inc, as well as a director of a trading company, were detained on March 23 and remanded for seven days until March 30. 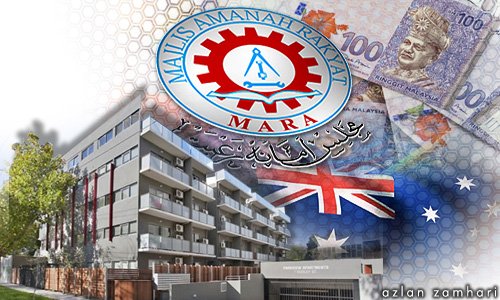 Two former senior officers of Mara Incorporated Sdn Bhd (Mara Inc), both with the ‘Datuk’ title, are among three people being held under remand for investigation into the purchase of property by the company in Melbourne, Australia.

The remand order was issued by Magistrate Nik Isfahanie Tasnim Wan Ab Rahman today against a former chairperson and former chief executive officer of Mara Inc and a director of a trading company.

The three men, who are in their 40s and 50s, would be in remand for seven days from today until March 30.

They were detained at about 10am yesterday after giving their statements at the Malaysian Anti-Corruption Commission (MACC) headquarters in Putrajaya.

Last year, Mara Inc, which is an investment arm of Mara, was involved in a controversy following a report by an Australian newspaper, The Age, which claimed that the company purchased a five-storey apartment block at Dudley International House in Melbourne at a price which was above the market price.

The newspaper claimed that ‘a group of very rich Malaysian officers had overpaid A$4.75 million (RM13.8 million) for the apartment block in 2013.

Dudley International House was bought by Mara for use as a hostel for its students there. 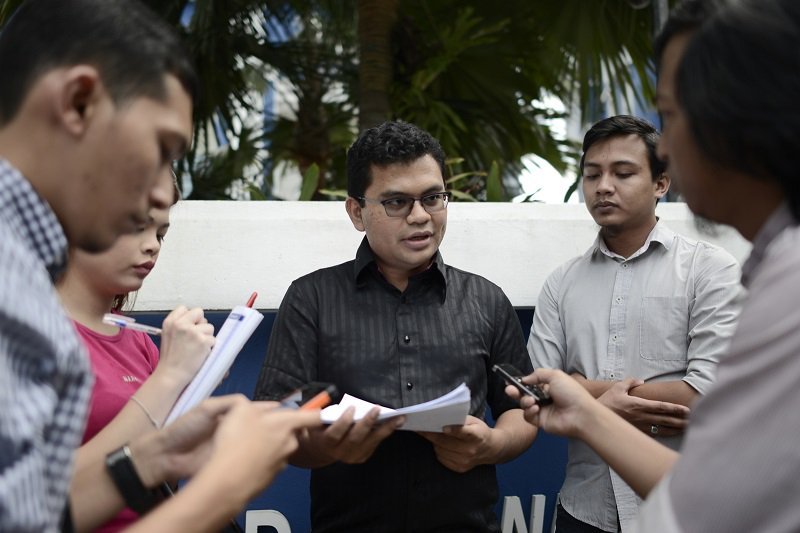 A whistleblower group and a former student activist lodged a police report today over Majlis Amanah Rakyat’s (Mara) purchase of properties in Australia.

Akmal said the report was to get authorities to investigate the “scandal” involving the purchases, for which Mara had overpaid by RM129 million.

He said the report was lodged because Mara had “failed” to settle the scandal, even though its chairman had assured that appropriate action would be taken when the scandal was revealed about eight months ago.

“The documents included the Statement of Claim and several invoices, as what was revealed by (Pandan MP) Rafizi Ramli previously, an organisation chart of the company and court transcripts,” he said in a statement today.

He said the chart showed how three people and three companies that received payments of RM14 million were linked to the issue.

Akmal said they also wanted the police to probe if there were elements of criminal breach of trust, especially if Mara’s top management or politicians were involved.

“We hope this report will be a way to recover the money overpaid and returned to Mara.

Four property deals in Melbourne are under scrutiny.

The paper reported that Azizi and Ghani had allegedly defaulted on an agreement on the transfer of the plot of land on which the condominium was to be built.

Justice Datuk Akhtar Tahir reportedly set September 17 for the court’s decision without having to go through a trial, saying: “The earlier files are here and we can refer to them, so we just need to have those files to clarify those matters and we can decide”.

The controversy came to light when Australian daily The Age reported about the overpriced purchases in June, which prompted Prime Minister Datuk Seri Najib Tun Razak to effect an investigation into the alleged corruption.

‘I was forced to shift funds’

PETALING JAYA: A former senior staff of Australian bank Westpac claimed that he was forced to illegally transfer Malaysian Govern-ment funds to a third party, according to an Australian newspaper report.

The Sydney Morning Herald reported that Michael Knight who handled the sale of the Dudley House deal in Melbourne, was confronted by a man bearing an Asian appearance outside his Brighton home on March 5, 2013.

“I know you have three children – you will do what I say,” the unnamed man had told Knight while implying he was carrying a gun.

Fearing for the safety of his family, Knight claimed he was forced to repeatedly shift funds loaned to the Malaysian Government into his personal account before handing it to the man.

The daily also reported that Knight, who managed financing for property development at the bank, was assisting “a Malaysian government agency” in obtaining financing for the Dudley House deal.

Upon discovery that they wanted to buy the property at an overvalued price of A$22.5mil (RM63mil), Knight confronted the potential borrowers, claiming they were “clearly paying too much”.

When his advice was not heeded, Knight believed the vendors were raking super profits and sharing it with Malaysian officials involved in the deal.
…

When his actions were discovered in September 2013, the bank sacked Knight for obtaining property by deception and reported the incident to the police.

When charged in court, Knight pleaded guilty for moving the funds into his personal account and was sentenced to perform community service. 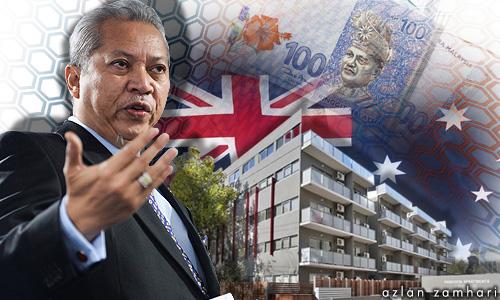 “The two are relieved of their duties so that the investigation can proceed without interference and the two are not accused of anything.

“This absolutely does not mean we have found any wrongdoing by them at this time. 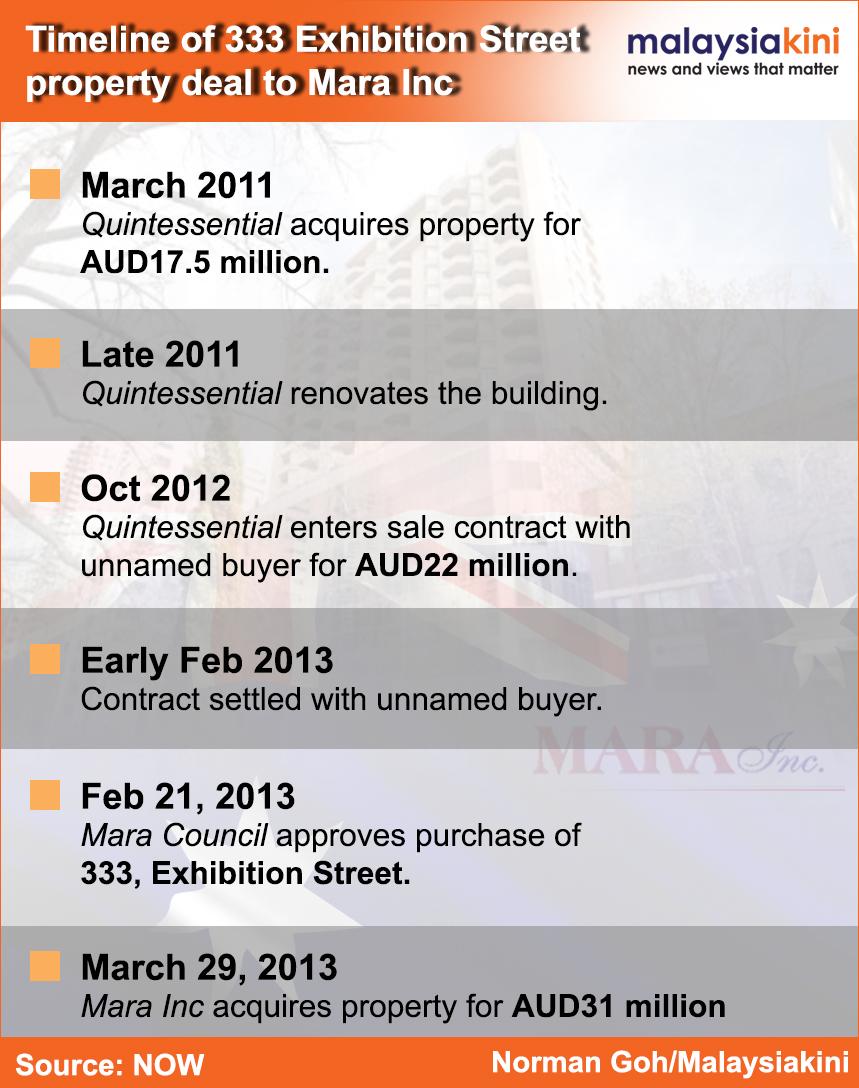 Going by Mara documents leaked to him last week, Rafizi said, the Mara Council approved the purchase of the property at 333, Exhibition Street for A$31 million (RM89.7 million) on Feb 21, 2013, with the acquisition being done on March 29, 2013.

However, the Australian company Quintessential Equity had, just six months earlier in October 2012, sold the same property to an unnamed buyer for A$22 million (RM63.7 million).

According to a report by the property company, it entered into a sales contract with the buyer at that time, and the contract was settled in early February 2013.

Quintessential had earlier bought the office building for A$17.5 million (RM50.6 million) in March 2011, and then renovated it before making the sale.

“This clearly proves that the purchase of 333 Exhibition Street involves the same method as Dudley House, where the price paid by Mara Inc is far higher than the market price,” Rafizi told a press conference today.

This building is at the centre of the allegations of money laundering and bribes. The Dudley International House apartment block, located at the suburb of Caulfield.

Three other property deals are also under scrutiniy. 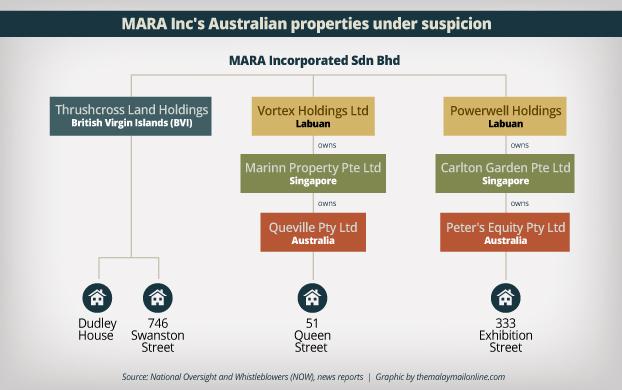 Rafizi, who is also PKR secretary-general, said MARA Council’s approval for the controversial purchases shows incompetence on the part of the agency or possible corruption in the deals.

“The decision to buy these four properties were made when it was clear it wouldn’t have a clear return on investment because it was below the market rental yield.

“Meaning the rental yield at the time was 6.5 to 7 per cent and if you look at the document given by MARA which was used to get approval from MARA council, not a single of these investments were in line with the market average or let alone above it,” he told a press conference at the NOW headquarters.

Rafizi said although the average rental yield for properties at the Melbourne Central Business District are between 6.5 and 7 per cent, MARA’s properties only generate estimated returns of 5 to 6 per cent. 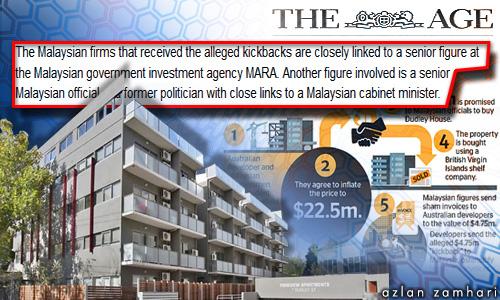 Going by Mara documents leaked to him last week, Rafizi said, the Mara Council approved the purchase of the property at 333, Exhibition Street for A$31 million (RM89.7 million) on Feb 21, 2013, with the acquisition being done on March 29, 2013.

However, according to a report from Australian property company Quintessential Equity, Mara Inc had entered into a sales contract for the same property at A$22 million (RM63.7 million) in October 2012, and settled the sale with the unnamed buyer in early February the following year.

“This clearly proves that the purchase of 333 Exhibition Street involves the same method as Dudley House, where the price paid by Mara Inc is far higher than the market price,” Rafizi told a press conference today.

The Age ‏@theage 58m58 minutes ago 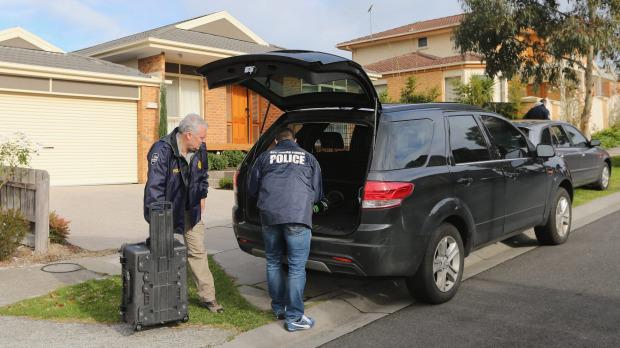 June 25, 2015 – 11:44AM Nick McKenzie and Richard Baker Australian Federal Police officers have launched raids in Melbourne as part of an international bribery and money-laundering investigation involving high-ranking Malaysian officials, businessmen and the purchase of Melbourne property.

Federal agents seized computers and files on Thursday morning from a home in Vermont South and it’s believed several other properties were targeted across Melbourne.

The AFP’s Operation Carambola was launched in response to an investigation by Fairfax Media into a scheme involving Malaysians using multimillion-dollar Australian properties to launder funds and return “kickbacks” to Asia.

While corruption links to property purchases in Australia by foreign nationals have generated significant political interest from Treasurer Joe Hockey and senior cabinet members, this is the first time that police have launched a full-blown operation. 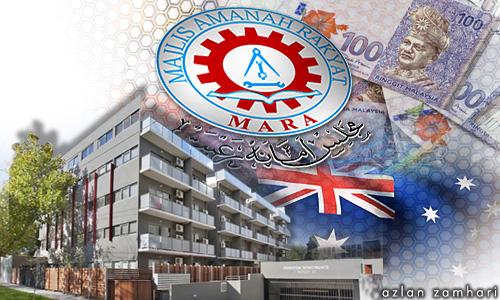 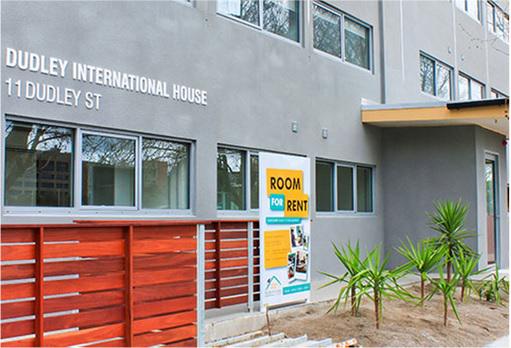 1 Response to #MARA in Australia: Dudley House and other property deals. #Maragate