KOTA BARU: Police have formed a special unit to investigate the death threat made by a group against Inspector General of Police Tan Sri Khalid Abu Bakar in a video posted on YouTube last Tuesday.

Noor Rashid added that the police had sought the help of the Malaysian Communications and Multimedia Commission (MCMC) to investigate the group involved.

“We also cannot exclude the possibility that the group is based overseas and the server situated outside the country,” he added.
…
The group is believed to be responsible for two videos – one threatening to set off fireworks at a courthouse to symbolise their mistrust of the judicial system and the other the death threat against the IGP for supposed “crimes against democracy”.

While they may turn out to be hoaxes, it could also signal a greater danger towards the country, he added.

“We are not taking this lightly. This is worrying and at the government level, we look at this seriously.

“While for some, this may be a small issue, but for the government, this is possibly just a tip of the iceberg for many other things that might happen in the future,” Muhyiddin told a news conference here.

KUALA LUMPUR: It’s all part of the job, says Inspector General of Police Tan Sri Khalid Abu Bakar on the death threat made against him.

“I am unfazed by the threat to bomb my car from this group of irresponsible individuals,” said Khalid.

“They want to put Malaysia’s parliamentary democracy in a bad light. This shows that the group does not understand what is the true meaning of the democratic system which has been practiced by our country for so long,” he said in a statement Wednesday.

A group calling itself “Anak Malaysia Anti Demokrasi” has threatened to assassinate inspector-general of police (IGP) Khalid Abu Bakar by blowing up his car.

In a YouTube video, viewed through the Facebook page of Ameno World, the threat was issued by three individuals wearing balaclava with the Malaysian flag in the backdrop.

One of them was also holding a photograph but the image is not clear.
…

The narrator – whose voice was digitally distorted – said the United States, Russia and China became developed and respected because the people did not choose democratic means to bring down corrupt regimes.

“Can Malaysians change the Election Commission (EC) chairperson, the attorney-general and the IGP by way of democracy?

“These people are the ones who destroy democracy.

“As such, we Malaysians who are anti-democracy, announce that we will kill the IGP by blowing up his car,” added the narrator, whose face was covered with the group’s logo.

He further explained that doing so will ensure that heads of the country’s agencies will be afraid to commit crimes against democracy.

The narrator then pushed two toy cars forward before one of the men in the video set ablaze one of the cars.

This was followed by the sound of a car exploding, and the video ended with the trio flashing their middle fingers.http://www.malaysiakini.com/news/290166?utm_source=twitterfeed&utm_medium=twitter 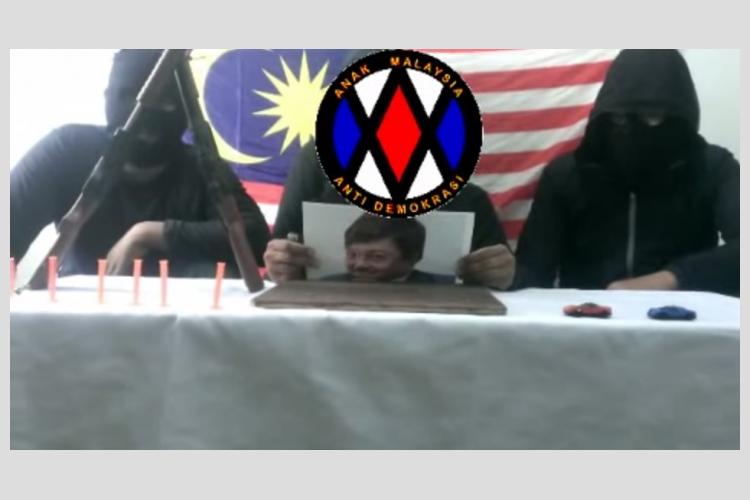 Actor: “No need to entertain” group threatening IGP in video

PETALING JAYA: Actor Jaafar Onn has decided not to take the path of his fellow actor, Nora Danish, in filing a police report against a group who used his picture in a threatening video.

“That is their game and I do not need to entertain them by making a police report because it is a waste of time.

“They are not brave people because they covered their faces,” Jaafar, 64, told mStar Online on Wednesday.

He was responding to the video by Anak Malaysia Anti Demokrasi (Amad) which showed three masked men threatening to bomb the car of Inspector-General of Police Tan Sri Khalid Abu Bakar in the name of democracy.