Ibrahim Ali of Perkasa, a sexist, racist and bigot…

Ibrahim Ali: I don’t want The Star CEO’s forgiveness, I will appeal

SHAH ALAM, May 11 ― Perkasa president Datuk Ibrahim Ali said today that he does not want forgiveness from local daily The Star chief executive officer Datuk Seri Wong Chun Wai, after his defamation suit against the latter was struck out.

Ibrahim confirmed he will appeal against the Shah Alam High Court’s decision today in order to continue his libel suit against Wong and The Star’s publisher.

“Yes, I have informed my lawyer to file appeal,” he told Malay Mail Online when contacted today, adding that it will be done “as soon as possible”.

When told that Wong had forgiven him and urged against pursuing the legal suit, Ibrahim said he was “not wrong”, adding that he will still appeal his case regardless of Wong’s decision to forgive.

“No, what forgiveness? I’m not wrong. I have my rights. It’s not a question of forgiveness. Whether he forgives me or not, it’s up to him, but I’ll appeal my case.

“He said he forgive me as if I’m wrong. I don’t want his forgiveness,” Ibrahim said.

In an immediate response carried by The Star, Wong said he was glad that the defamation suit was will not go on to trial, adding that he forgives Ibrahim and hopes the latter will move on.

“I am glad that the case has been dismissed and will not go to trial. It is good for all parties that we can move on to more important matters. I forgive him. As a Christian, it is important that I forgive him. I hope he ends it here and not appeal. Let’s move on,” he was quoted saying by The Star’s portal.

Court strikes out libel suit against The Star’s CEO

SHAH ALAM: Columnist Datuk Seri Wong Chun Wai, an advocate for moderation, has succeeded in striking out a libel suit by Datuk Ibrahim Ali in relation to the Perkasa chief’s call to burn bibles.

Wong had said that he was merely making an honest comment.

In his application, the Star Publications (M) Bhd group managing director and chief executive officer said the case was unsustainable as the defences of justification, fair comment and/or qualified privilege were bound to succeed.

The court did not make an order with regard to costs as Wong had said that he would not seek costs from the plaintiff.

Merry Xmas, Wong Chun Wai! Perkasa chief has a Xmas ‘gift’ for you.

Perkasa chief claims The Star CEO had defamed him in article

KUALA LUMPUR: The opening round of the legal bout between Datuk Ibrahim Ali and Datuk Seri Wong Chun Wai has begun on Boxing Day with the Perkasa chief formally filing the suit against The Star’s group managing director and chief executive officer.

Ibrahim alleged that the article on his Bible-burning call, titled “A mind-boggling spin” and published in Wong’s On the Beat blog on Nov 2, had defamed him by stating that he should be charged under the Sedition Act.
…

Wong said he welcomed the suit, saying his lawyers had already started preparing his case. “The support from many ordinary Malaysians who believe in moderation has been enormous. We have a strong case, righteousness with us and we will let the court decide,” he said.
…
In Ibrahim’s statement of claim, he said Wong’s article had implied that he (Ibrahim) was a religious extremist, ridiculed Christianity, was a fool to make such statements, and intended to create enmity between races and religions.

Ibrahim claims he was not contacted for verification and that Wong’s statements were entirely untrue, and had caused serious injury to his reputation. He stated that the article had a wide reach as The Star daily is one of the highest circulated newspapers while The Star Online had a readership of over 1.07 million viewers a month.
…
Ibrahim is seeking general, aggravated and exemplary damages, plus costs. He is also seeking an injunction to prohibit the defendants from publishing any further articles which could defame him.

PETALING JAYA: The Star colum­nist Datuk Seri Wong Chun Wai says he is ready to take on Datuk Ibrahim Ali after the Perkasa chief stated that he will sue him over his write-up on the “Bible-burning” issue. “I will fight him in court. We will see him in court. It’s a fight between moderates and extre­mists,” he said.

Wong, responding to the Perkasa chief’s statement proclaiming that he would proceed with the defamation lawsuit against him, stressed that legal suits would not intimidate moderate Ma­­laysians. “No one can stop the voice of moderation and reasoning,” said Wong. “Malaysia has no room for extremism.” 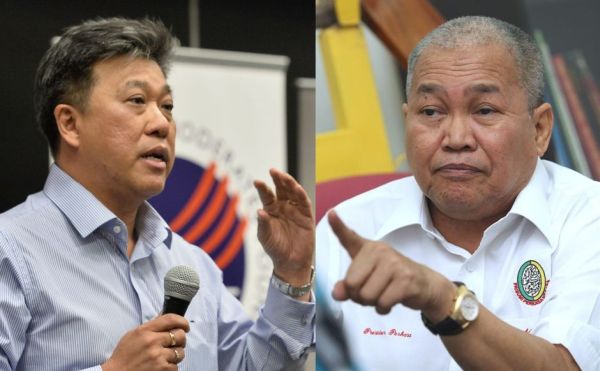 On Nov 24, Ibrahim sent a letter of demand to Wong, claiming that the latter’s article titled “A mind-boggling spin” published in The Star and The Star Online on Nov 2 contained defamatory statements against him.

PETALING JAYA: The Star’s Datuk Seri Wong Chun Wai will not back down in the face of an impending lawsuit by Datuk Ibrahim Ali. “I will see him in court,” said Wong, who is Star Publications (M) Bhd group managing director and chief executive officer, responding to a statement from the Perkasa chief who said that he would proceed with the defamation lawsuit against him.

“No one can stop the voice of moderation and reasoning. Malaysia has no room for extremism,” said Wong. An online news portal quoted Ibrahim as saying that the response he received to his Nov 24 letter of demand to Wong sounded like a “sermon” (khutbah). “I am not saying he is wrong, but I want the court to decide if his statement was defamatory,” Ibrahim was quoted as saying.

IT smacks of double standards and no one can fault moderate-minded Malaysians, who have some sense of justice and fairness, to feel that the statement from the Attorney-General’s Chambers lacks any conviction.

The ordinary Malaysians are finding it difficult to be convinced by the legal arguments put up by the Attorney-General on why Perkasa chief Datuk Ibrahim Ali, who had called for the burning of the Bahasa Malaysia Bible, has not breached sedition laws.

We are now told that Ibrahim was merely defending the sanctity of Islam. No one can accept this mind-boggling spin, more so when it comes from the principal legal adviser to the government. … The A-G’s decision not to file charges against Ibrahim based on “context” and “intention”, which are actually matters for the court to decide under the Sedition Act, is a dangerous precedent. … We were already shocked by the reply from the Minister in the Prime Minister’s Department Nancy Shukri in Parliament and the A-G’s statement justifying Ibrahim’s action certainly made matters worse. … Tun Dr Mahathir Mohamad has also weighed in with a comment that Ibrahim “was giving an opinion that could be accepted by Muslims as it was not seditious”.
…

But the statements from the A-G and Dr Mahathir are unacceptable because what they are saying, in short and simple layman’s language, is that Ibrahim has done no wrong and they wonder what the fuss is all about. Ibrahim can actually now say that he can carry on with what he has said.

After all, the A-G, who is the sole authority in deciding who to prosecute, has not only let him off, but given us reasons that basically open the door for similar actions in the future.

And it certainly does not help that Dr Mahathir, with his own way of reasoning over the burning of holy books, has stood by him. But the statements from the A-G and Dr Mahathir are unacceptable because what they are saying, in short and simple layman’s language, is that Ibrahim has done no wrong and they wonder what the fuss is all about.

Ibrahim can actually now say that he can carry on with what he has said. After all, the A-G, who is the sole authority in deciding who to prosecute, has not only let him off, but given us reasons that basically open the door for similar actions in the future. And it certainly does not help that Dr Mahathir, with his own way of reasoning over the burning of holy books, has stood by him.

IT IS A LONG ARTICLE. CLICK ON THE LINK FOR THE WHOLE REPORT: