PEOPLE ARE MOVING TO ONLINE NEWSMEDIA FROM NEWSPRINT. This is a worldwide trend, and seemingly irreversible.

—
THE SKY IS FALLING FOR THE FOLLOWING PUBLICATIONS: 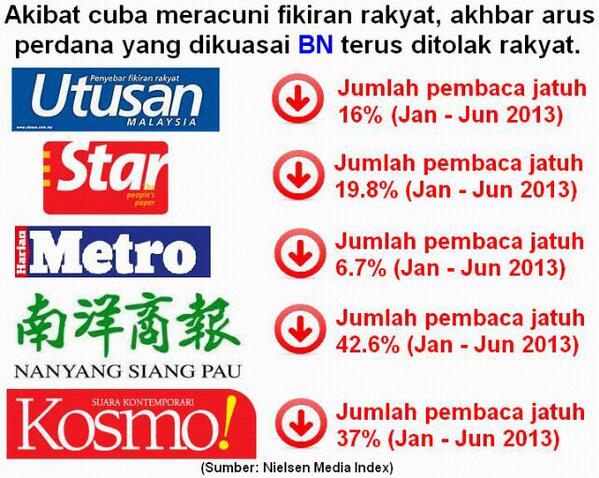 With the raging battle in the print media and drop in circulation, four newspapers are planning to give out Samsung or Huawei tablets to boost their subscription sales.

Last week, Nielsen Media Index in its latest survey indicated a circulation drop ranging from 10 to 40 percent among the country’s leading mainstream newspapers.

The reduction was attributed to the backlash from the 13th general election as a result of lopsided news reports in the run up to the GE in May.

“We are in the process of working out costs, the brand of tablet, studying the readership market and improving the quality of the content to attract our readers,” he told Malaysiakini at the launch of The Malay Mail’s 200,000 copies of the weekend edition in the Klang Valley yesterday.

A total of 200,000 copies, Verronn said, will be distributed free every Friday with a bumper Weekly Runner that is packed with one week’s content on community happenings, arts and culture, entertainment, motoring, sports, health and wellness.

The Weekly Runner was launched outside Lot 10 at noon with zombies, pajama girls and conjoined twins to engage the public’s curiosity.

Two Malaysian media groups are slagging off each other with analyses this past week that show their opponents are weakening with falling circulation and readership figures amid rising competition for influence in the local market.

On October 5, MCA-owned The Star reported that business weekly The Edge had its market share sliced off since Focus Malaysia entered the market 10 months ago.

Today, The Edge’s owner Datuk Tong Kooi Ong wrote an analysis in the weekly that said the English daily’s business model will not work as online news portals will chip away its advantage.

Calling it ugly, Tong hinted at The Star’s future when he also blogged that the daily had “a fantastic business model that generated growth in sales and profits for over twenty years. It pays good dividends, while accumulating huge cash in the bank”.

“From an underdog, it became the Establishment,” the respected businessman said in his tongkooiong.com blog, noting that it has now lost its appeal as shown by falling circulation and readership figures.
…

“Going forward, it will get worst. More changes to technology and new players will reduce further its value proposition. What works in the past will no longer work going forward. I wonder if the management is aware?” he asked in his blogpost.
…

The Star last week highlighted The Edge’s falling figures, saying that its business section StarBiz was ahead with “its mass circulation of average 300,000 copies with readership of close to 1.7 million while its online version has over 3 million unique visitors monthly”.

Posted by Anil Netto on 6 September 2010

Utusan has been very much in the news for its sensationalist and racially tinged reporting. Less well known is the fact that the paper’s circulation has been sliding over the last four years.

Chinese-language newspapers generally did all right, Sin Chew‘s, China Press’ and Oriental Daily News’ circulations all rising over the same period. Only Guang Ming recorded a small drop in circulation.