Posted on September 8, 2013 by weehingthong 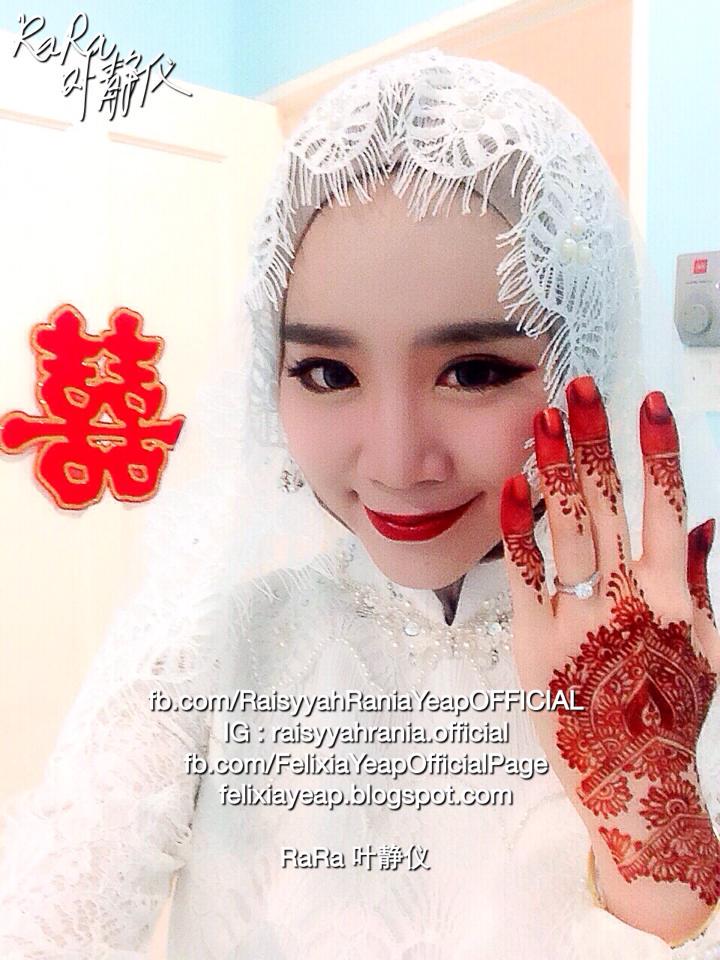 By Dennis Chua – 7 June 2015 @ 9:29 PM
KUALA LUMPUR: Ex-Playboy bunny and model Felixia Yeap has tied the knot yesterday, according to her official Instagram and Facebook social media pages.
…
Yeap who converted to Islam on July 3, 2014 and is now known as Raisyyah Rania Yeap stated in her official social media pages that she was thankful to God for her marriage. “It was a simple ceremony and I did my own makeup,” she said in a statement.
…

It is learnt that her husband’s name is Dr Rezal Khairi Ahmad.

Rara says the CNY celebrations have nothing to do with religion, but rather, was a celebration of the new year.

Yeap, Malaysia’s first ever Playboy bunny, had made the announcement of her conversion to Islam during her 28th birthday on July 3, 2014, on Facebook, reported The Mirror UK.

But her conversion has not stopped Yeap, now Raisyyah Rania Yeap (Rara), from joining her family reunion dinner and celebrating CNY, reported The Malaysian Insider.

She explained that most of the CNY celebrations had nothing to do with religion or religious beliefs, but was instead a celebration of a new year.

“Even back when I had no religious belief (atheist/freethinker), I was almost never involved in the praying ceremonies or rituals,” revealed Rara.

“Thus being a Muslim now does not seem to be much different than how things were pre-shahadah,” she added.

Rara remarked that her first year celebrating the lunar new year as a Muslim had made her appreciate her Chinese roots more.

Pre-conversion days, she would only spend four to five days in her hometown.

However, from this year onwards, she planned to spend “at least seven to 10 days” with her family after having prioritised her work over her family all these years.

EASY TO CONVERT, IMPOSSIBLE TO GET OUT.

Ex Playboy bunny Felixia Yeap takes GIANT STEP into Islam, thanks mom for standing by her

Felixia Yeap, the former Playboy bunny who announced last Friday that she was embracing Islam, said she felt “born again” on her birthday today when her conversion would be made official.

The 28-year-old, however, said she would fight to keep her Chinese name given by her mother.

“My Chinese name means tranquility and elegance,” said Yeap, who said she would take the Islamic declaration of faith in front of family members and close friends.

“Today is not just my birthday, but also the day that I am born again. The day that I finally return after 28 years of finding the way home,” wrote Yeap in her soul-baring posting this morning.

Yeap said her conversion was the result of a seven-month quest to learn about Islam, after she took to wearing the hijab, a decision which attracted criticism from her fans.

PETALING JAYA: Malaysia’s first ever Playboy bunny Felixia Yeap (pic) will be “reborn” this Thursday when she embraces Islam.

In a Facebook status update Friday, the Ipoh lass said she chose July 3 to embrace the religion as it was also her birthday.

“I hope everyone will pray that I will be steadfast and committed in my new journey.

“Only Allah can repay all those who prayed for my new life,” the 28-year-old said in her posting on her Facebook page that has more than 750,000 likes.

WATCH THIS MERMAID IN ACTION! 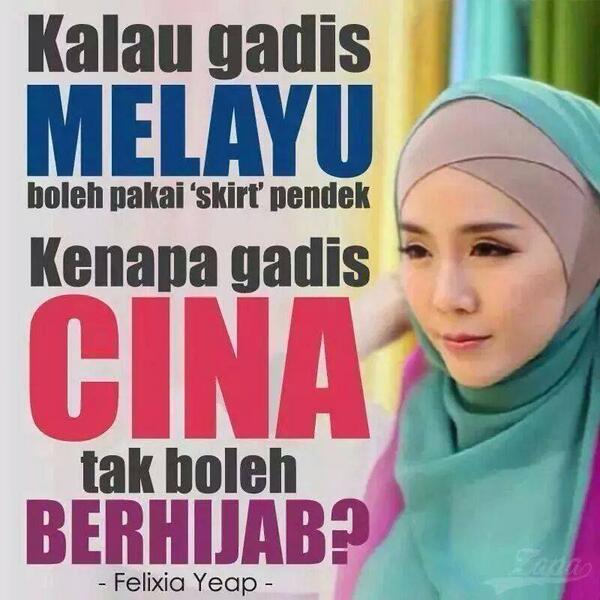 IS SHE HAVING SECOND THOUGHTS ABOUT HER EARLIER LIFE?

Felixia Yeap is a model by profession but she is more than a model. This woman combines beauty and brains.

SOON, THERE WILL BE MORE MERMAIDS! BUT JUST ONE FELICIA YEAP.

MerFins give (from Left) Lucy Meyer, five, and her friends Stan Rowe, five, and Zoe Rowe, seven, the thrill of pretending they are mermaids. — ST PHOTO: DESMOND WEE

SOME PEOPLE REALLY HOPE FOR HER CONVERSION! You can’t blame them since she seems to be putting out ‘feelers’…

I am starting to realize that the mosques in Malaysia are actually very beautiful, heart calming, cooling and… http://fb.me/3W02g6eOa 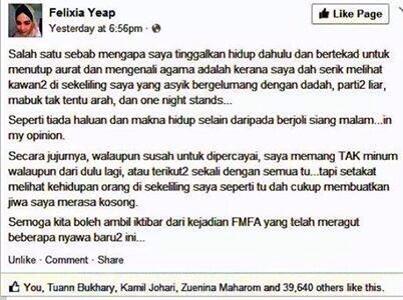 I am really not comfortable when certain religious association seems to take advantage on my current situation and create an illusion to the public and in media that they want to “help” me and that they approached me…when nobody from their side actually did.

So does that not count as spreading a lie?

From an association that actually said want to guide me towards a religion, I think that did not set a good first impression nor good example already. 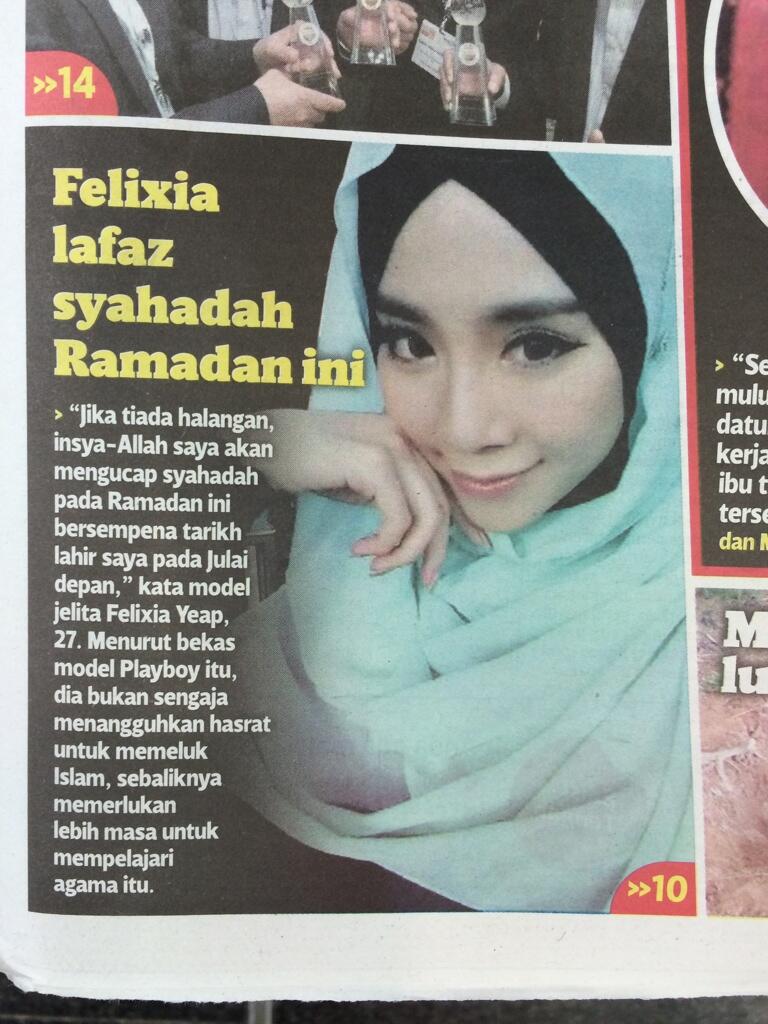 Was Felixia Yeap in Ipoh recently?

19 hours ago near Ipoh
Some of my staff said that’s Felixia Yeap in our shop but I don’t read FHM or keep up with such things… I’m pretty sure it’s my shop in the background because I bloody paid for those tables… But seriously, is that this Felixia Yeap…? 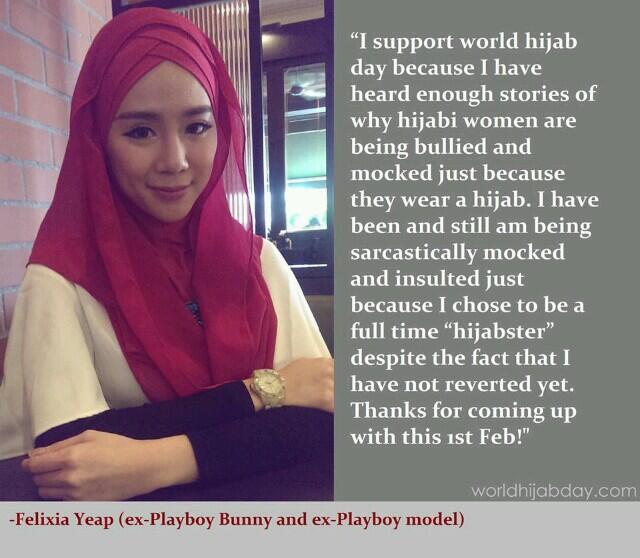 She’s a smart girl and knows that you have to pay the bills. There is no free lunch.

If you want to eat, you have to work. That’s being pragmatic.

Malaysia’s FIRST Playboy bunny models the HIJAB: Will she be nabbed for SEDITION?

First Malaysian Playboy bunny and model Felixia Yeap’s decision to don the hijab (Muslim headgear) despite being a non-Muslim has shocked many, with some fans berating her and labelling it as a “publicity stunt”.

The 27-year-old Ipoh beauty, who has been modelling since she was 19, however, remained unperturbed by all the scepticism and criticism that she had been receiving since she started donning the hijab a few months ago.

“They say I did this to find a rich Malay Datuk to marry. If I wanted to find a rich man, I would have done it a long time ago when I was still actively modelling in sexy poses. Their criticisms defy logic. All I wanted to do was to cover up more and do more decent modelling,” she told The Malaysian Insider.
…

Yeap’s action had been criticised by Muslims as well as non-Muslims who said she was being “disrespectful” towards Islam for wearing a hijab.

They said before donning the hijab, she should have removed the pictures of her in a Playboy bunny outfit and also others which showed her in sexy poses and revealing attire.

Some of her over 148,000 fans on Facebook and her blog had criticised her action as a publicity stunt to gain more popularity and fame. Some even left her social media site after that.

Yeap, who is still receiving invitations to appear at Playboy events and functions all over the world despite ending her career as a bunny in 2010, defended her action.

She said although some Muslims had criticised her, most of the negative comments had come from non-Muslims.

She said she had always loved baju kurung and Malay-Muslim traditions.

On the negative perception towards her for donning the hijab, Yeap said she did not blame the fans for being “confused” with her action.

On her sexy modelling gigs, Yeap said she is completing her remaining commitments which she had agreed to before she decided to wear the hijab.

“This month would be my last assignments. I have to make several appearances for Playboy Bunny International. Many failed to understand that this is a work commitment and I am a professional model. I have to complete the job by hook or by crook. Even if I want to leave something I want to leave it with pride.”

What would be her New Year resolution? Yeap said she is going to be selective in her modelling gigs.

From Playboy bunny to hijab model

PETALING JAYA: Malaysia’s first Playboy bunny feels she is “worth more than showing off my body.”

Felixia Yeap, whose modelling career took off after a stint at the Playboy Club Sands Macau two years ago, is now modelling Muslimah clothing such as the hijab.

“I believe I am worth more than just showing off my body. I am more than this.

“And I don’t feel proud if attention- or fame-seeking model wannabes out there look at me as their idol or role model,” she said in a blog post titled “The Truth Behind My Hijab.
…

Yeap said she felt “liberated” after she paraded in the hijab for a commercial casting a few months ago.
…

But modelling the hijab has not changed her religion. She denied that she had converted to Islam and remained a free thinker.

She still does “sexy” fashion shoots but that is because she has to “pay the bills.” And she is more selective now with her assignments.

“I am planning to slow down on those kind of shoots and try my best to avoid them. I only do about 30% of the requests I get,” she said.

From Playboy bunny to hijab model

Jul 23, 2013 – The Malaysian model and all-round stunner takes you along for lingerie shoot…

*SHE WAS MALAYSIA’S FIRST AND ONLY PLAYBOY BUNNY!

In May 2011, she made headlines in Asia by becoming Malaysia’s first and only Playboy Bunny when she was handpicked for a waitressing job at Macau’s Playboy Club Macao, a swanky nightspot for high-rollers.

*NOW SHE IS A MERMAID, MALAYSIA’S ONLY MERMAID!
If you want someone special, a special act, for a party, you could hire her for $1,600.

She performs mostly at private parties and outdoor fashion shows, charging $1,600 for a “30 to 45-minute” performance. A typical gig involves “swimming around in the pool, smiling and posing for cameras, as well as chit-chatting with guests”.

You don’t see a “goldfish” on the front page and two full pages-spread in one of Singapore’s most famous newspaper, The New Paper…every day.
This is probably their first!Hmm, guess this golden Mermaid Felixia of yours did swim out of Malaysia…
Wet kisses,
Mermaid Felixia
…

August 30
Lots of LOVE for Playboy Philippines !!! ♥That’s me. =)
Yes, in a Playboy magazine.I am the THIRD Malaysian woman to be featured in Playboy magazine after Jacinta Lee in 1986 (PB HK) and Amber Chia in 2006 (PB ID).
#ThisIssue’s Asian Beauty, Felixia Yeap (first Malaysian Playboy Bunny) is certainly one of the best Malaysia has to offer. #FriskyFriday
..