Beijing strikes back in #HongKongProtests

Posted on August 9, 2019 by weehingthong

All these criminal acts are no different from terrorism. #HongKong is facing real threat of terrorism. #香港 pic.twitter.com/XMI60RpQpe

Twitter said it took down more than 900 accounts linked to the Chinese government that were spreading misinformation about the Hong Kong protests https://t.co/e9KLVBuIvg

KPMG distanced itself from Friday's statement on Apple Daily claiming to have been posted by employees of the Big Four accounting firms and calling for the release of arrested rioters in #HongKong. #香港 pic.twitter.com/R2kJY68tdQ

First it was Cathay Pacific. The Big Four accounting firms may be next. https://t.co/qKFPMJ9uh5 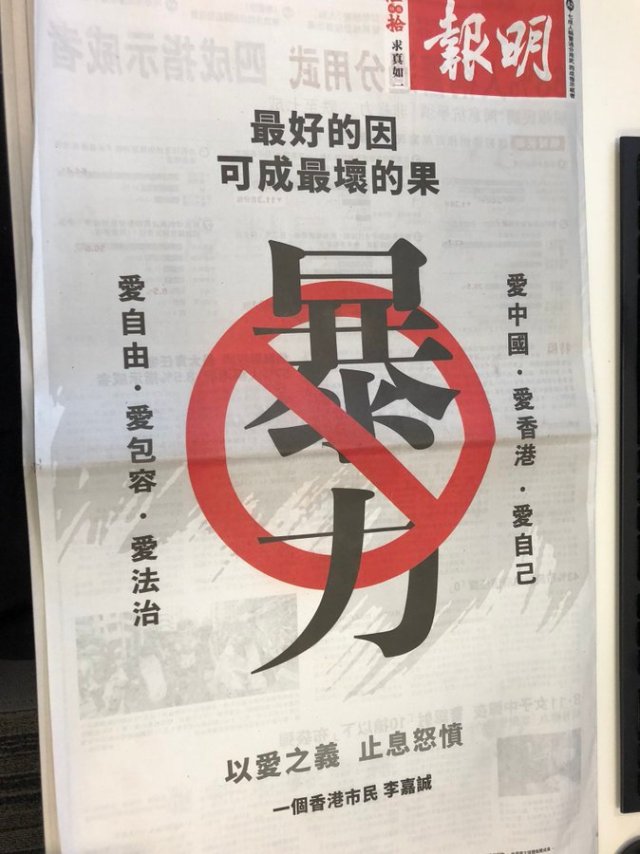 This full-page ad from “Hong Kong citizen Li Ka-shing” appears on the front page of several Hong Kong newspapers this morning, urging a rejection of violence and warning that “the best cause can lead to the worst result” #antiELAB pic.twitter.com/HXnOSl0rm1

#HongKong media: Rioters must be stopped and punished pic.twitter.com/AbZtBGlimV

#RT @WSJ: Across the bay from Hong Kong, thousands of young Chinese paramilitary police exercise in a sports stadium, military vehicles at the ready https://t.co/UMhyizioiX

Five people, aged between 20 and 22, have been arrested on suspicion of insulting the Chinese national flag in #HongKong on Aug 3, HK media reports. pic.twitter.com/ff4CMfK7TM

Look at both sides of the coin，That's what happened in Hong Kong https://t.co/NSE4ofc7Tf

"Hundreds of China’s People’s Armed Police conducted exercises at a sports stadium in Shenzhen on Thursday, as the U.S. State Department expressed concern that they could be deployed across the border in Hong Kong to break up protests wracking the city." https://t.co/JQpF0bEqhi

People speak out on violent protests in #HongKong pic.twitter.com/pZSgiH2JXR

Some of the YouTube comments I got for hosting videos about Hong Kong’s protests. I was called a prostitute, a trash woman and a beautiful anchor who ought to be raped. (My male colleague also got personal attacks, though he was only called a trash journalist.) pic.twitter.com/MMI1V6GvTR

Fyi if you want to check whether those attacks are legit or not https://t.co/bPQlw7UbKj

Compared with the treatment meted out during the violent protests in Europe and the US, the #HongKong police have exercised massive restraint. #香港 pic.twitter.com/6nIEcCVuEB

The People’s Armed Police have been assembling in Shenzhen, a city bordering Hong Kong, in advance of apparent large-scale exercises, videos obtained by the Global Times have shown. https://t.co/3KgaXeHw3C pic.twitter.com/YXAORMay0W

#CathayPacific boss also says it “must and will comply” with a new set of controversial rules set down by the #Chinese aviation regulator https://t.co/WxSOn764On

What would you expect a dictatorship country will do?
All she could do is to suppress any opposition and resort to violence. #HongKongProtests #hongkong #China #hk

Fire, barricades, projectiles, fists – this is the truth behind #HongKong's "peaceful demonstrations" pic.twitter.com/WxhprKWsMK

Violent protesters in #HongKong blocked the streets, attacked civilians and besieged the police stations. Who are the possible masterminds behind the paralyzation of Hong Kong and this violence? #香港 pic.twitter.com/QOVCTvzAsl

The pro-Beijing newspaper published a photo of opp activists meeting with Julie Eadeh, a political section chief in the U.S. Consulate in Hong Kong, along with details about Eadeh’s State Department career and the names of her husband and teenage children.https://t.co/GIors8IBSN

* US hits back at China for targeting diplomat in Hong Konghttps://t.co/yi1GPis3xM

A salute to #HongKong's police! The city's police, by acting in a professional and restrained manner during the violent protests, again show why they are one of the world's best law enforcement forces. pic.twitter.com/449hdp4Fhm

About 500 of Hong Kong's political and business leaders were summoned by Beijing, to discuss 'the worst crisis since the handover'. https://t.co/X3AD7XRcuu pic.twitter.com/Dbpq5Za9Ig