Mahathir and Anwar will NOT launch the “Stand Up 4 Human Rights” Rally on Dec 8: Suhakam has postponed it to Dec 9…

Posted on December 5, 2018 by weehingthong

DON'T BE TOO QUICK TO WRITE OFF DR MAHATHIR – HIS HEART IS IN THE RIGHT PLACE: 'DR M IS A MASTER STRATEGIST & EVERYTHING HE SAYS HAS TO BE VIEWED ON A LARGER SCALE' – SUHAKAM CHIEF DEFENDS PM AS BRICKBATS POUR IN OVER PERCEIVED BACKPEDALING ON HUMAN RIGHTS https://t.co/w4JtdQ5GEB

"I have  been the commission’s chairman for three year and not even once I get to meet the deputy prime minister. There were too many protocols. To see them was just like to see God.” – Suhakam
https://t.co/7KPoHxwuw2

“The prime minister has helped us by not attending this celebration. When he is not here, many have become interested to attend.

“Many have come to us with many questions and show their interest in various issues pertaining to human rights,” he told a press conference after the event.

Dr Mahathir was initially scheduled to launch the celebration, however he later said he could not attend due to the government’s stand on International Convention on the Elimination of All Forms of Racial Discrimination (ICERD).

The celebration was initially planned for yesterday, the same day as the anti-ICERD rally being held in Dataran Merdeka.

However, it was postponed to today following police’s advise of a possible “serious security risk.”
.

Meanwhile, when asked whether the commission had face difficulties with the previous government, Razali admitted that there were various challenges and “red tape” at the time in upholding human rights.

“I have been the commission’s chairman for three year and not even once I get to meet the deputy prime minister.

“There were too many protocols. To see them was just like to see God,” he said.

“ No multi-racial society can claim that it is truly multi-racial if it shuts its doors to non-discrimination. “ says Suhakam Chairman Razali Ismail.

Although Suhakam may disagree with the gov’t on ICERD, it wants to continue working with ministers to ratify the other treaties pic.twitter.com/BT20QbCpPR

Razali said they were informed by the police and the Prime Minister's Office (PMO) that there will be serious security risks that may arise out of tomorrow's event that borders on national security. https://t.co/xjiWQPHPcH

SUHAKAM postpones its Human Rights Day event over anti-#ICERD rally: “The (police) has informed SUHAKAM & the Prime Minister’s Office without divulging details that there will be serious security risks arising out of tomorrow’s events that borders on national security.” pic.twitter.com/6OYwiEbD1S

Asking SUHAKAM to cancel an event that celebrates International Human Rights Day which many have done for years and years. Wow! That’s a first. So now we celebrate by cancelling events rather than having them! Great. And we were on the Human Rights Council!!

UPDATE: @Suhakam will be holding a press conference today about the postponement of Human Rights Day Celebration program at 4pm. https://t.co/yTWImyEKXo

Police have advised Suhakam to postpone its event to celebrate the International Human Rights Day tomorrow, according to government sources.

Prime Minister Dr Mahathir Mohamad was supposed to be the chief guest at the event, which was to be held in Padang Timur, Petaling Jaya.

“We are waiting for the cabinet meeting later and a final decision on this matter. We may have to postpone it,” a source told Malaysiakini.

Meanwhile, a police source confirmed that approval for the Suhakam event has been retracted.

Misleading and incorrect. Suhakam is not holding a rally. We regard as inanity/mischief, unworthy of the established standards of quality reporting in journalism, the reporting of the nature our annual human rights day celebration on 8 December 2018 https://t.co/xuRklF0tNv

The “Stand Up 4 Human Rights” Rally is organised by the Human Rights Commission of Malaysia (Suhakam). 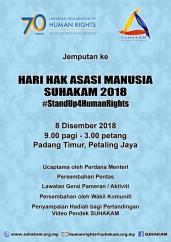 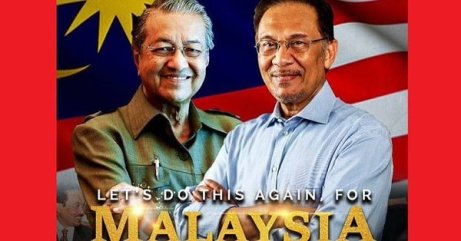 This is the first time that a prime minister will be attending a Human Rights Day event held by Suhakam. Mahathir’s first administration had set up the commission in 1999.

Suhakam’s event will be held at the Padang Timur field from 8am to 3pm. This is the first time Suhakam will be organising such an event in an open space.

Events include a play by Suhakam titled “Perjuangan yang belum selesai” (The unfinished struggle), traditional performances and a short video competition, among others.

About 10km north, thousands are expected to gather in Dataran Merdeka, Kuala Lumpur, during the afternoon on the same day for a rally against the International Convention on the Elimination of All Forms of Racial Discrimination (Icerd).
.

When contacted, Suhakam commissioner Jerald Joseph said apart from Mahathir, invitations have been sent out to many policymakers.

“We have a new government with Mahathir at the helm and they are trying to recalibrate Malaysia with admissions that there were many gaps and failures in terms of human rights in the past,” he said.
.
He expressed regret that the group organising the anti-Icerd rally was closed to such discussions.

“The two gatherings on the same day juxtaposes the position Malaysia is in. One side is rights-based while the other is saying human rights do not apply to Malaysia, which is a strange concept.

“For Suhakam, we need to keep pushing and opening up spaces for conversations on human rights,” Joseph told Malaysiakini.

PETALING JAYA: A pro-human rights rally is set to be launched by Prime Minister Tun Dr Mahathir Mohamad on Saturday, the same day as the anti-ICERD rally.

Organised by the Human Rights Commission of Malaysia (Suhakam), the rally will be held from 9am to 3pm at Padang Timur here.

Themed “Stand Up 4 Human Rights”, it is being held in conjunction with International Human Rights Day which falls on Dec 10.

It will be Suhakam’s first pro-human rights rally.

Mahathir and Chief Secretary to the Government Datuk Seri Dr Ismail Bakar are scheduled to speak during the rally.

The rally will be advocating Right to life, Right to Education and Sustainable Development goals.

Human Rights Day is observed every year on Dec 10 – the day the United Nations General Assembly adopted, in 1948, the Universal Declaration of Human Rights.