KUALA LUMPUR, Feb 1 — The Muslim Scholars Association of Malaysia (PUM) has removed its statement claiming “violence” may occur if police try to retrieve a Hindu mother’s daughter from her Muslim convert ex-husband.

It is unclear what prompted the group to delete the statement that had been posted on its official page.

Malay Mail yesterday reported the group’s statement, in which it claimed “violence” could take place unless police stop their pursuit of Muhammad Riduan Abdullah, who abducted his daughter Prasana Diksa from M. Indira Gandhi in 2009.

“We are concerned that if it is carried out, there is a possibility of conflict between religious adherents in this country that may spark violence in society,” its president Datuk Abdul Halim Abd Kadir said in the now deleted statement.

Malay Mail was able to preserve the statement prior to its removal.

Back off Indira’s ex or there may be violence, Muslim scholars tell police

Picture of Prasana Diksa who was abducted by her convert father Muhammad Riduan Abdullah. — Picture by Farhan Najib

KUALA LUMPUR, Jan 31 — The Malaysian Association of Muslim Scholars (PUM) has urged the police today to stop pursuing the fugitive ex-husband of M. Indira Gandhi and her youngest daughter that he abducted nine years ago.

In a statement posted on its Facebook page, the group warned that religious sectarian violence may erupt in this country if the police continue to hunt Muhammad Riduan Abdullah and Prasana Diksa.

“We ask for the kind consideration of the police to not hunt the father and the children until a solution can be found.

“We are concerned that if it is carried out, there is a possibility of conflict between religious adherents in this country that may spark violence in society,” its president Datuk Abdul Halim Abd Kadir said.
.
PUM also urged that the children unilaterally converted into Islam by Muhammad Riduan must not be allowed to revert back to Hinduism.
.

PUM had also requested the Yang di-Pertuan Agong to allow the group to advise in matters involving conversion to Islam.

It also demanded Putrajaya to act fast, claiming the issue would embolden provocateurs in the country.

No leads on whereabouts of Indira Gandhi’s ex-husband, daughter

M. INDIRA Gandhi’s former husband is still believed to be in the country, but the authorities have no idea where he is, said Inspector-General of Police Mohamad Fuzi Harun.

Fuzi said police will execute the order issued by the Federal Court yesterday to locate the ex-husband and their daughter to return Prasana Diksa, 10, to her.

“We started investigations to locate (the ex-husband) since 2014.

“I have given specific instructions to the team, especially the criminal investigations department, to locate the daughter which was ordered by the court,” he said after handing out promotions to senior police officers at the Khalid Abu Bakar hall in Pulapol today.
.

Fuzi said police have checked with the Immigration Department and Riduan is still believed to be in the country.

“We are appealing to the public to provide any information of his whereabouts to the police.

“We have been informed that we still have no leads. Let us know so we can take any appropriate action.”

Indira turned to the courts after Riduan removed their youngest child Prasana after unilaterally converting their three children to Islam in 2009.

Prasana was only 11 months old then. Indira has another daughter aged, 21, and a 20-year-old son.

The Federal Court orders Police to arrest ex-husband of Indira Gandhi for contempt of court!

But the police don’t know where he is! They think that Indira Gandhi’s lawyer, M Kulasegaran, may know who Ridhuan’s new lawyer is and hope that he will pass the name on to them… 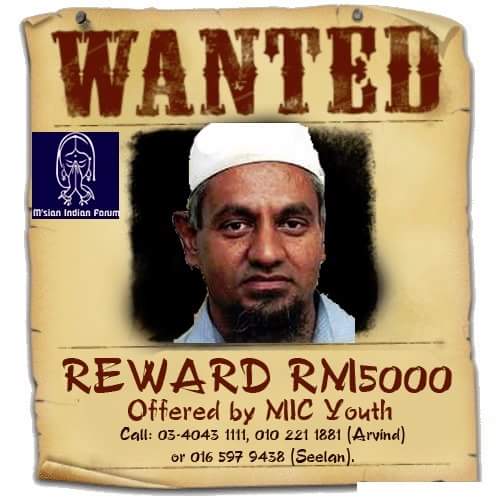 KUALA LUMPUR, May 4 ― MIC is offering a RM5,000 reward to anyone who can locate Muhammad Riduan Abdullah, the former husband of M. Indira Gandhi who has absconded with their youngest child whom he unilaterally converted to Islam.

National MIC information committee member Subash Chandra Bose said his party was keen to help the police in their manhunt for the Hindu-turned-Muslim father of three, wanted for contempt of court.

“He is a fugitive of the law and he must be caught. We want to help the police in whatever way we can and we want to rope in our fellow Malaysians in this too,” he told Malay Mail Online this evening when contacted.

Subash who is also Selangor MIC Youth information chief said he wanted to help see justice done for Indira who has been separated from daughter Prasana Diksa the last seven years.

“If Riduan is law abiding, he would have come out of hiding himself. But it has been few days since the Federal Court verdict, and he is still in hiding somewhere. He is outrightly challenging the law.

“So, we are offering this reward to whoever who can track down Riduan and alert us or the police,” he added.

Police have not been able to find Muslim convert Mohd Ridhuan Abdullah as his current whereabouts are unknown.

Ipoh police chief Sum Chang Keong said police had checked all known addresses of Ridhuan and his officers have also asked Ridhuan’s family members and friends of his whereabouts, but to no avail.

“We have asked but nobody knows. Even before this (Federal Court decision), we tried to find him but couldn’t,” Sum is quoted as saying by The Star Online today.

He said Ridhuan has also stopped engaging his lawyer in Ipoh and got a new lawyer since the case went to Federal Court. The Ipoh police chief said police do not have the contact of Ridhuan’s lawyer.

“Indira Gandhi’s lawyer M Kulasegaran may know who the lawyer is and I hope he can pass the number to the respective state police contingents.

“My jurisdiction is only in Ipoh,” added Sum.

Kindergarten teacher M Indira Ghandi have lodged a police report over fears that her Muslim convert former husband may flee to neighbouring Thailand before police can pick him up as per yesterday’s Federal Court order.

“I have lodged a police report because my ex-husband might leave the country,” she told Malaysiakini.

She also said that as he ex-husband Mohd Ridhuan Abdullah’s latest address is in Kota Baru, Kelantan, this may make it easier for him to cross the borders into the neighbouring country.

In her report lodged at the Ipoh district police headquarters today, Indira cited her experience when married to Ridhuan, during which the latter frequently visited Thailand.

“He has many friends there and sometimes even stays there for long periods of time,” said Indira in her report.

She therefore expressed hope for the immigration authorities to stop Ridhuan should he indeed attempt to make his way into Thailand.

Meanwhile, Indira, who last made contact with Ridhuan on April 8, said that her former husband has been using the same mobile telephone number since 2009.