All my NAKED Posts

A British tourist and his French companion have been arrested in Peru after posing naked for photos at the ancient site of Machu Picchu.

The police stopped 23-year-old Adam Burton and French national Eric Xavier Mariec, 28, while they were still naked at the ancient site, which re-opened this week after maintenance work.

They were arrested on the spot and police later released the images from a mobile phone, showing the two men posing in body-builder stances with no clothes on.

The men were prosecuted for offences against morality, according to state news agency Andina, and the photos were released to warn other tourists against lewd behaviour at the ancient site.

The photos showed the Incan citadel in the background, which is a proud part of Peruvian heritage and one of the Seven Wonders Of The World. 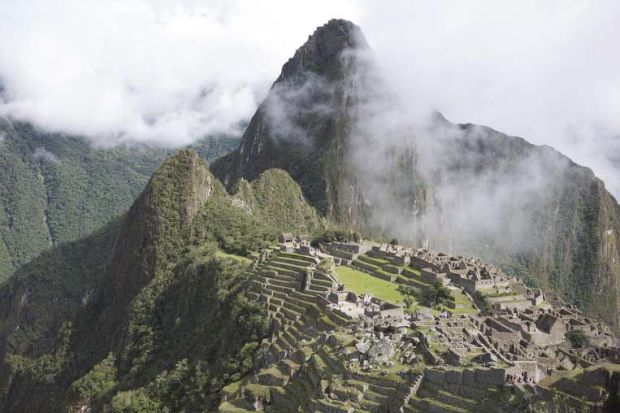 LIMA, March 4 — Authorities in Peru yesterday arrested a pair of European tourists who had stripped naked to take photos at the Machu Picchu ruins, media reported.

Guards spotted the two men — a Briton and a Frenchman — after they removed their clothes to take nude photos with a cell phone, the Andina news agency reported, citing police.

They were taken to a police station and then to court, where they were charged with moral misconduct.

Peru increased surveillance at the site in March 2014 as nude photos and streaking became increasingly common at Machu Picchu.

Angkor Wat, Machu Picchu: Why are tourists getting naked?http://www.dailytelegraph.com.au/travel/holiday-ideas/people-are-getting-naked-at-historic-monuments/story-fnjpjagw-1227365104071?sv=10a64b1885e19ec5d73f64f8171e88d4#.VWBQNcFTgrY.twitter …

People are getting naked at historic monuments

WE TOTALLY get why looking at a monument might move you — but move you to drop trou and snap a belfie in front of it?

Yet that’s just what tourists around the world have been doing — stripping down in sacred spots like Angkor Wat and Machu Picchu and capturing their bare butts, breasts and beyond to share on Instagram. But authorities aren’t taking the “naked tourism” business lightly — folks caught in the act are getting fined, deported and even banned from visiting the countries.

The Huffington Post
Posted: 03/11/2014 6:53 pm EDT
Foreigners are baring their naked bodies all over Peru’s most iconic cultural heritage site and the government wants it to stop.
…

The two people who appear in the video are Australian tourist Sydney Rudevies Liam Timothy, 18, and New Zeleander Topp Mathew Jared, 30, according to a police report posted to the Ministry of Culture’s website. Cops made them delete the image from their digital camera, but someone else made a separate recording of the incident and “irresponsibly published it to the Internet,” the statement says.

“It bears emphasizing that we informed them that it is totally prohibited to take photos of this magnitude,” the police report says.
…

In another photo circulating online, a bearded and dreadlocked Israeli by the name of Amichay Rab poses before the postcard image of the Incan ruins, a bent leg shielding his penis from view. The photo appears on his blog “My Naked Trip,” which features images of Rab being naked across Latin America.

Like Loading...
This entry was posted in Uncategorized and tagged machu picchu naked tourists arrested, naked at world heritage sites. Bookmark the permalink.

1 Response to Naked at Machu Picchu