Cerebos (M) Sdn Bhd, the producer of Brand’s products, announced that its products’ prices will not increase with the implementation of the goods and services tax (GST).
…

Brand’s Essence of Chicken will offer its products at only RM24 and RM33 for a six-bottle pack of 42 gramme and 70 gramme respectively, while the 70 gramme 12-bottle and 14-bottle packs are priced at RM56 and RM68 respectively.

It is now made compulsory for restaurants and hotels to inform customers of their service charges with signboards: KPDNKK

STILL ON THE SUBJECT OF PREPAID TOP-UPS: WHAT DO YOU THINK OF THIS? 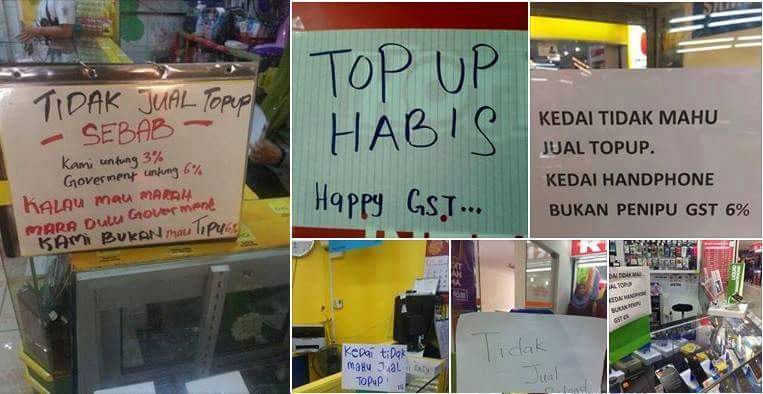 SHAH ALAM, April 3 — Deputy Finance Minister Datuk Ahmad Maslan has clarified that the prepaid telco cards and reload will revert to the old prices and will not be subjected to the Goods and Services Tax (GST) from next month.

The decision was reached a meeting between the Ministry of Finance and the Royal Malaysian Customs Department with four telecommunication companies this morning following an uproar that the prepaid cards and reload are subjected to the GST.

“The prepaid top-up was among the main issues brought up on the first two days of the GST implementation. Yesterday, the telcos, following discussions with the Customs Department, decided to charge RM10.60 (for prepaid card and reload of RM10) but added an airtime bonus worth RM1.30.

“But following hue and cry from the people, I held another meeting with the telcos to revert the decision and maintain the charge at RM10,” he Ahmad told reporters after visiting Proton Holdings Bhd here, today.
…

For a new RM10 prepaid card, Ahmad said the value before the GST is RM9.43 while the GST is 57 sen, with the telcos adding a bonus air time to ensure that its value is equivalent to the purchase price

Malaysians and Singaporeans react to the new 6% GST in Malaysia 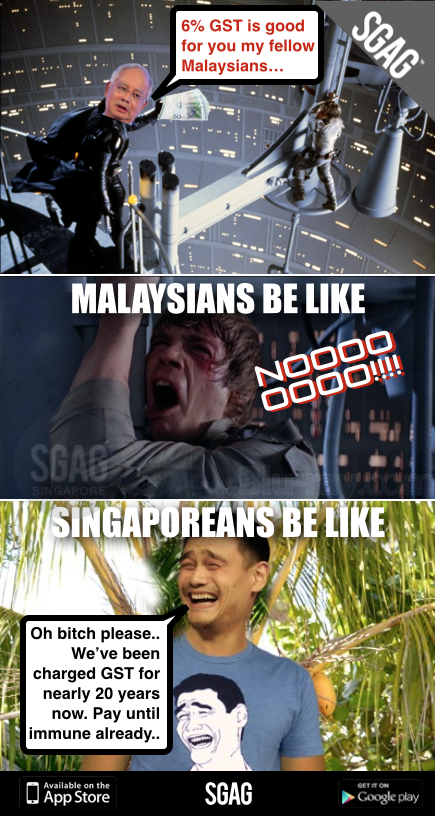 KUALA LUMPUR: Good news for Internet users. Charges for broadband services are expected to drop by more than 6%, effectively leading to lower prices for such services despite the introduction of the Goods and Services Tax (GST).

An announcement on the lower rates would be made this month and the effects of the new pricing would be immediate, said Communications and Multimedia Minister Datuk Seri Ahmad Shabery Cheek.

To encourage more Internet use, he said broadband rates must be more affordable.

He met with the chiefs of the telecommunications companies recently and was scheduled to see them next week to further push for lower broadband rates.

“The telcos have agreed in principle to reduce the tariff.

There are about 20 million Internet users in the country, according to ministry statistics.

Meanwhile, the big four telco chief executives in separate statements said they were supportive of the minister’s call to lower broadband rates.

DiGi.com Bhd CEO Albern Murty said that “lower prices are in line with our aspirations to deliver Internet For All, which is rooted in the principle of affordable access for broadband and mobile Internet services”.

Maxis Bhd CEO Morten Lundal said it would work with the ministry on this matter.

The GST imposed on the pre-paid reload cards have raised the ire of a large number of users, many of whom took to social media to air their grouses.

He said the companies have agreed to do so while both the department and the industry stakeholders can come up with a permanent solution.

“This is a grace period of three months before we can sort out the teething problems related to the implementation of GST on the service,”

“After the period, we will see whether it is possible to reduce the price of air time, or whether they would remain at the same rate before GST (came into effect).”

Mydin insists prices not up, GST in receipts legally required after photos spread

KUALA LUMPUR, April 1 — Local hypermarket chain Mydin has refuted allegations that it has reneged on its promise to absorb the Goods and Services Tax (GST) in force from today, saying that it is legally required to display the tax imposed in its receipts.

Earlier today, photos of Mydin receipts were circulated on social media, with some Internet users accusing the company of passing on the six per cent GST to shoppers.

Datuk Wira Ameer Ali Mydin acknowledged the “confusion” arising from Mydin receipts showing the amount of GST imposed, but maintained the company has not increased the prices of its goods.

“Why it shows in the receipt is because at the end of the day, it’s required by law to show six per cent on receipt,” the managing director of Mydin Mohamed Holdings Berhad told Malay Mail Online when contacted.

In a photo sent through the WhatsApp messaging app, he forwarded two receipts with identical goods being bought at Mydin on March 31 and April 1, showing that the total amount paid by customers on both days had not changed.

A comparison of Mydin receipts before and after the Goods and Services Tax kicked in on April 1, 2015. — Picture courtesy of Datuk Wira Ameer Ali Mydin.

The only difference is that the April 1 receipt displays the amount of the GST — which replaces the previous system of Sales and Services Tax (SST) of between five and 10 per cent.

Ameer Ali reiterated that Mydin will not pass on the six per cent GST to shoppers for the month of April and pointed to the company’s “Harga Tak Naik” campaign to maintain price levels.

Books, magazines and newspapers in printed or digital form are exempted from GST.

Several of the chain’s stores had mistakenly imposed GST on newspapers on the first day of the tax’s implementation.

PETALING JAYA: 7-Eleven Malaysia Holdings Berhad has apologised for a “system error” that saw newspaper buyers being charged the 6% Goods and Services Tax (GST) on Wednesday.

In a statement, the 24-hour convenience store chain said it withdrew its newspaper products from stands after the error was brought to their attention, and said it was working on revising the prices.

“For anyone who was impacted today, we would appreciate if you could contact us using private message via 7-Eleven Malaysia’s official Facebook page or email to marketing@7eleven.com.my with your contact details (email and mobile number) for us to be in touch to further rectify the matter,” 7-Eleven said in a statement. 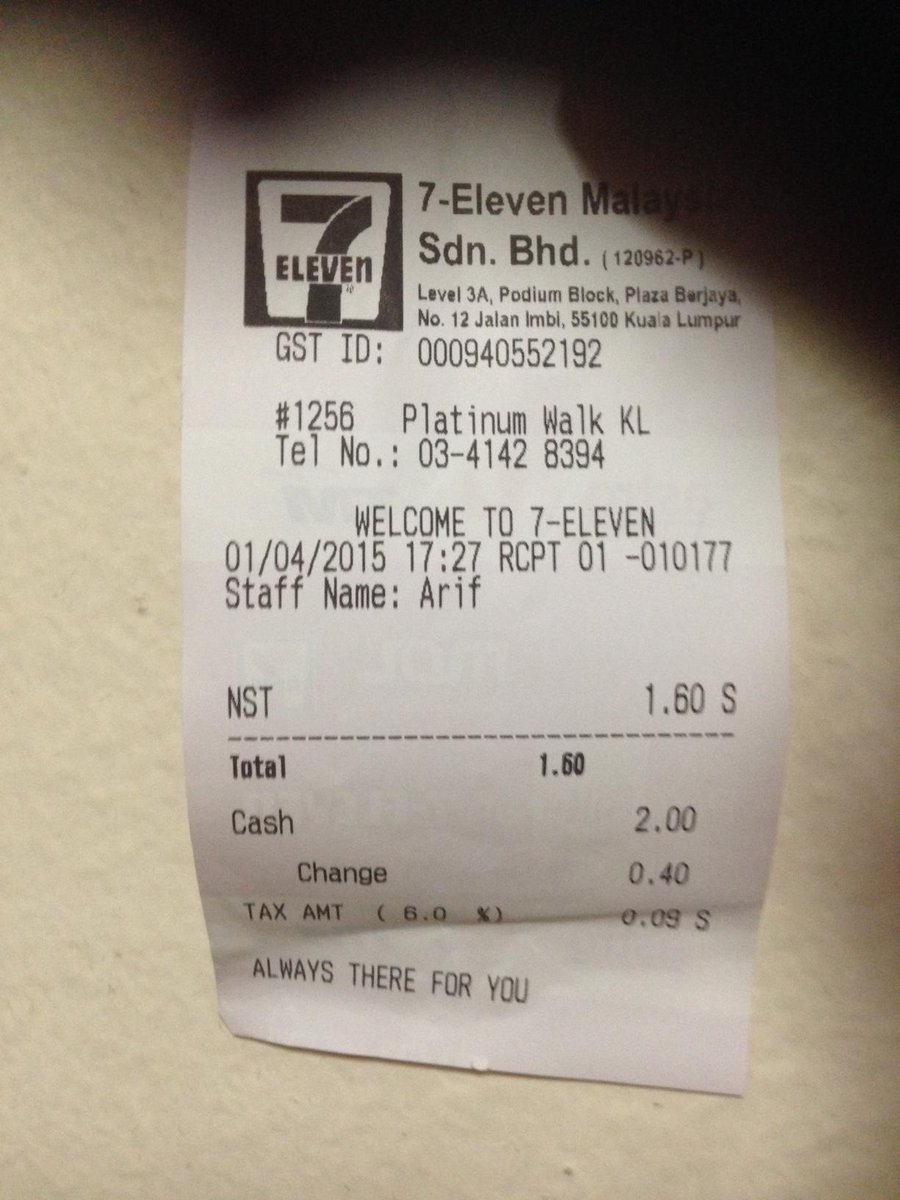 No increase in movie ticket price by TGV after GST. We need more honest retailers like this. Good move.

This is the method of Mydin for incur GST.Also an example Bill for an explanation. However GST should have in the Bill to fulfill the Act 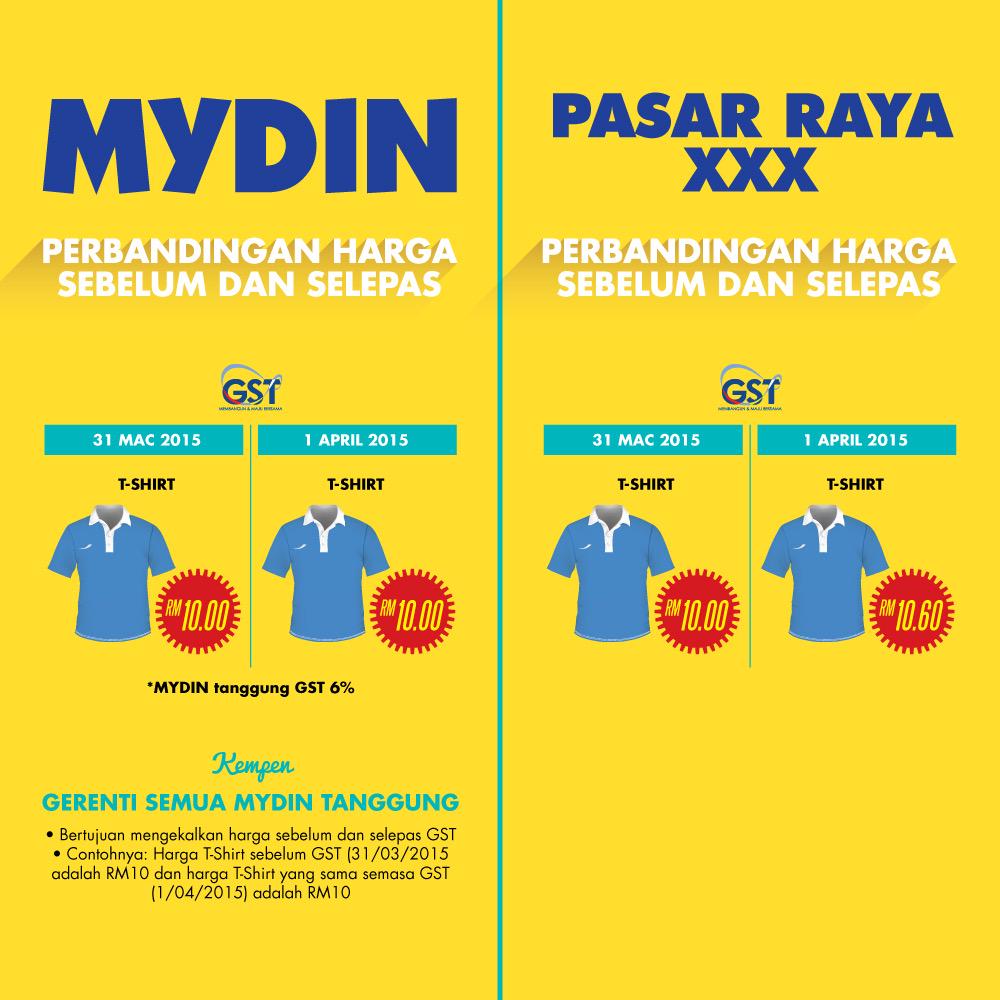 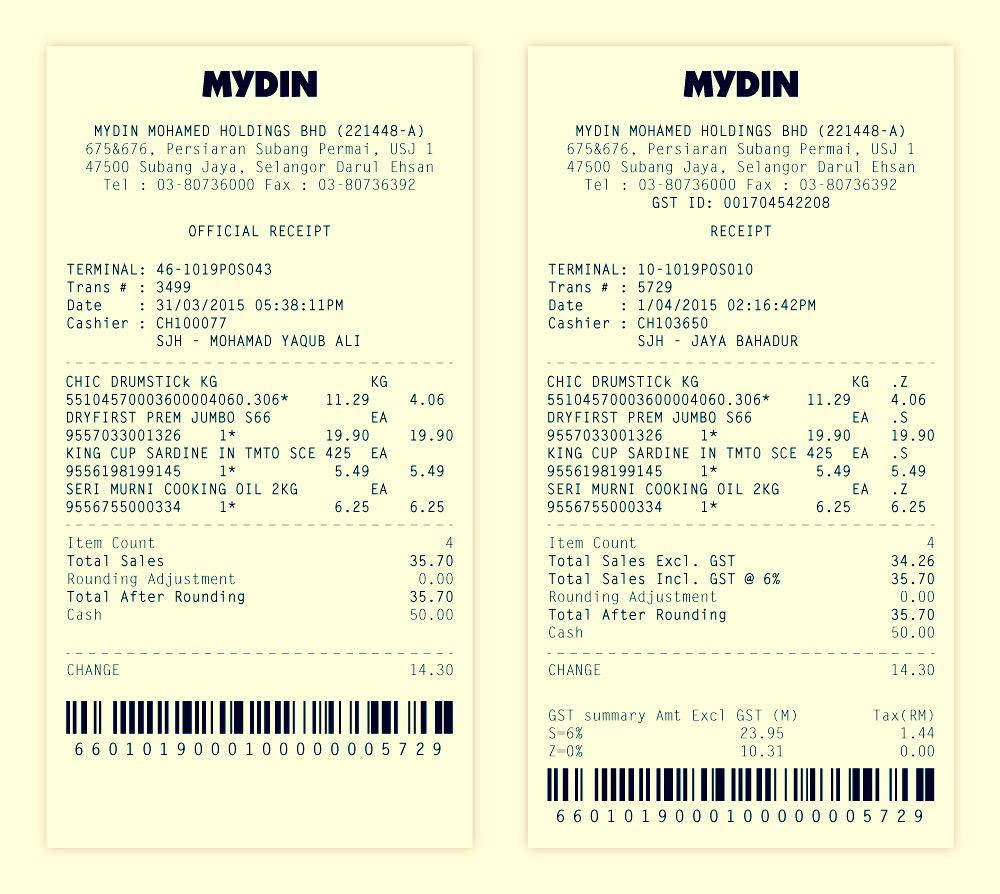 The Ikea store, operated by Ikano Pte Ltd, has reaffirmed that product prices in the 2015 Ikea catalogue would remain the same as before implementation of the Goods and Services Tax (GST).

Ikea Damansara store manager Gerard Jansen said the store is committed to providing a wide range of Swedish home furnishings that are affordable, well-designed, functional and good quality for the many people.

“Customers can continue to enjoy the same low-price products and solutions in spite of the GST rollout. 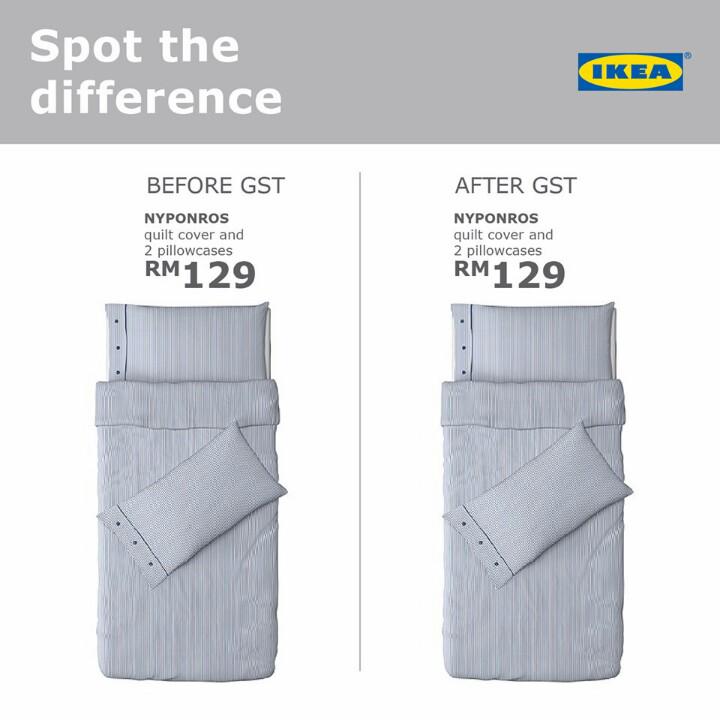 NO SURPRISE. MAS WILL CHARGE GST. What else do you expect from a LOSS-MAKING enterprise?

KUALA LUMPUR: Malaysia Airlines’ customers will be charged the 6% Goods & Services Tax (GST) on applicable goods and services supplied by the national carrier when it comes into effect on April 1.

Malaysia Airlines said on Monday this implementation adhered to the government’s announcement during the tabling of its Budget 2014 on Oct 25, 2013.
“The GST, however, will be replacing the company’s existing Sales Tax and Service Tax,” it said.

One passenger who booked a flight on March 26 found that she was charged GST on her booking fee, for the April 3 flight.

However, passenger PinPing Tan said the AirAsia officer who dealt with her complaint claims hers is an “isolated case” due to a “system fault”.

“So far I am the only case they are aware of, so no idea how many tickets were charged,” she wrote on Facebook.

Tan also uploaded her receipt which showed that she was charged 24 sen in GST, levied on the direct debit processing fee of RM4.00.

AirAsia promised they will refund the GST mistakenly charged, she said.
…
“This isolated case was immediately brought to AirAsia’s attention and the matter has been resolved on March 27, 2015 directly with the guest,” it said in an email to Malaysiakini.

Golden Screen Cinemas have decided that they will be ‘April Fools’ for the whole month of April.

If it is true, cinema-goers will say, “Thank you.”

Golden Screen Cinemas Sdn Bhd (GSC) will in April absorb the 6% GST for tickets for up to a month.

The company statement pointed out that, in the implementation of the tax, theatre ticket, coupon, sale of goods and food prices stayed the same, but customers must pay more for original 6% consumption tax.

Some companies in Malaysia have pledged to keep prices down with the introduction of a Goods and Services Tax. Other retailers like hypermarkets are preparing for the GST with labelling and and banners. — PHOTO: THE STAR

PETALING JAYA (THE STAR/ASIA NEWS NETWORK) – Hypermarts in Malaysia are all set for the Goods and Services Tax (GST) on Wednesday. 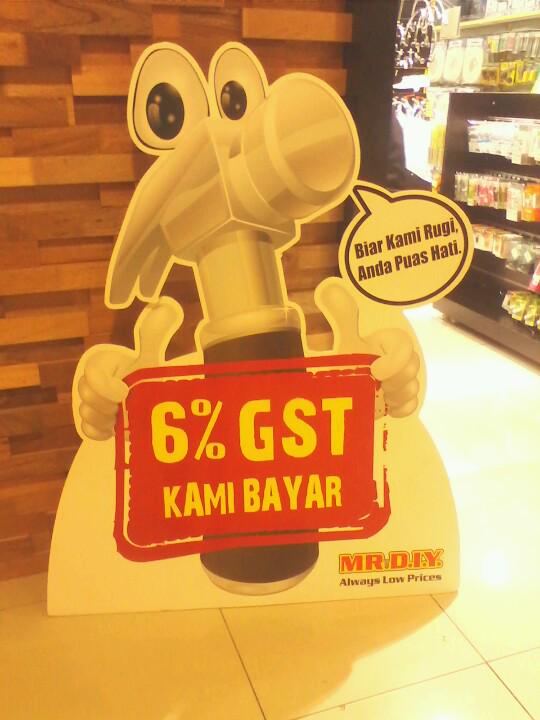 Mydin is a local company owned by Mydin Mohamed Holdings Berhad and is one of the major players in the hypermarket industry in Malaysia. 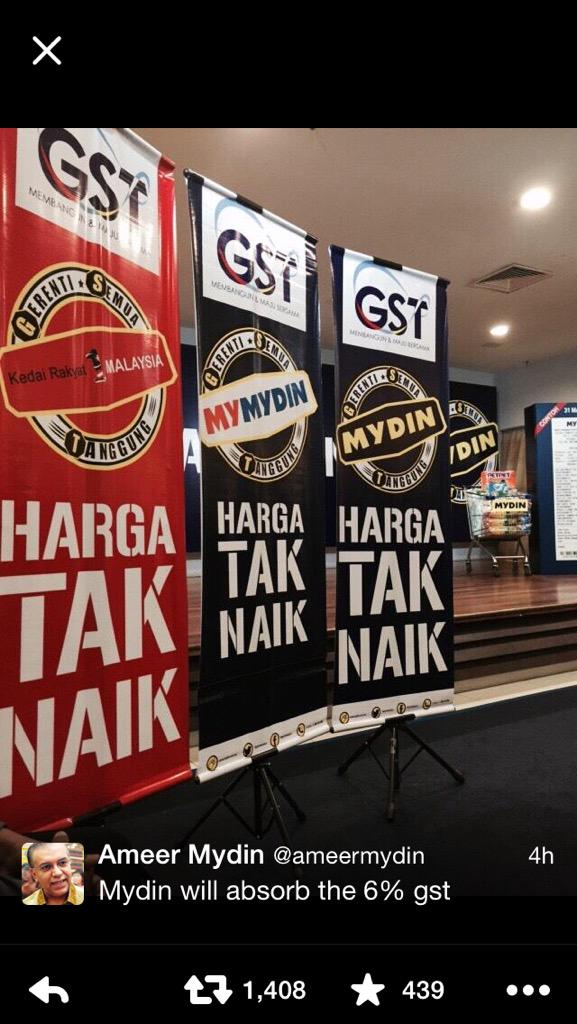 Mydin to absorb RM15mil in GST cost from monthly profits

PETALING JAYA: Mydin Mohamed Holdings Bhd will absorb the cost of the Goods and Services Tax (GST) of RM15mil from the estimated RM300mil monthly profits of its hypermarket and supermarket outlets.

Managing director Datuk Ameer Ali Mydin said Mydin would recover a portion of the GST cost from its suppliers and from the stocks that are refundable  under the existing Sales and Service Tax (SST).

The GST will replace the SST from tomorrow.

“We have discussed with 3,000 of Mydin’s suppliers and 1,500 of them have agreed to absorb the GST cost
.
“The percentage of cost to be absorbed by them is yet to be determined. But, it will likely be between two to four per cent of the six per cent GST. A majority of the suppliers are locals,” he said.

He told reporters this after a visit by Deputy Finance Minister Datuk Ahmad Maslan to the Mydin Subang Jaya outlet today.

He also said local suppliers were cooperating well in helping Mydin maintain the price of goods.

“I am concerned if there are some individuals using this move to scam consumers by saying they are absorbing the cost, but consumers end up paying the GST tax.”

Who Ends Up Shouldering The Burden Of GST?

KUALA LUMPUR: The decision by wholesale supermarket MYDIN to absorb the cost of the Goods and Services Tax (GST) when it is implemented tomorrow is seen as a smart move by the supermarket chain.

Mohd Yusof Abdul Rahman, Communications Director of Federation of Malaysian Consumers Association said, this is indeed a public-spirited move by MYDIN to ease the consumers’ burden.

“We have to be vigilant. Even though they say they will bear the GST cost, but in the invoice produced, they still need to mention the amount of tax.

“We as consumers gladly welcome any traders who are willing to absorb the GST cost to help ease the consumers’ burden.

“I am not referring to MYDIN only, it is just an example,” he said when contacted by Malaysian Digest today.

He further explained, consumers need to be very careful if there are some traders who claim that they will absorb the GST cost but likely before GST implementation, they have already raised the price of goods.

“Good traders like Mydin can absorb the six percent GST!” he tweeted today.

Along with his tweet, he posted a picture of Mydin’s poster which read “prices not going up, six percent GST we will pay”. 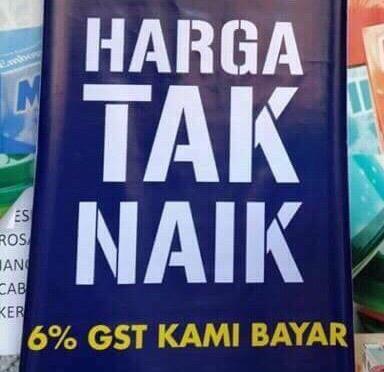