Justice for Ms Chee Gaik Yap: Shahril Jaafar to hang for her murder…

PUTRAJAYA: The Federal Court today upheld the death sentence of businessman Shahril Jaafar for the murder of Chee Gaik Yap near a club in Sungai Petani in 2006.

Chief Justice Raus Sharif ruled that the High Court was right in finding Shahril, the son of a businessman with a Datuk title, guilty of the crime.

“We are unanimous in our decision.

“Based on the circumstantial evidence, we found that the accused is the person responsible for the deceased’s death,” he said in delivering the apex court’s decision.

Shahril, 37, merely nodded when the court delivered its decision.

Chee, who worked as marketing executive, was raped and her body dumped in a housing estate.

She was believed to have been tailed by her assailant while jogging in the neighbourhood.

Shahril was picked up soon after Chee’s body was found but released on police bail pending the results of a DNA test.

He later skipped bail and left for Perth, Australia, where he obtained permanent resident status.

He was re-arrested six years later when he arrived at the Kuala Lumpur International Airport from Perth in January 2012.

In June 2014, the High Court acquitted Shahril as the prosecution failed to establish a prima facie case.

However, in November that year, the Court of Appeal set aside the High Court’s decision and ordered Shahril to enter his defence.

Shahril gave an unsworn statement from the dock where prosecutors could not cross-examine him.

He told the court he met Chee for the purpose of having consensual sex, and paid RM350 to an individual called “Wayne” for sexual services from her.

He also told the High Court that they had sex in his car and that Chee was still alive when she left.

Shahril had denied he was involved in her death, and said he did not flee to Australia while police investigated the case.

Businessman sentenced to death for 2006 murder

ALOR SETAR: A 34-year old businessman, Shahril Jaafar was sentenced to death this Sunday for the 2006 murder of Chee Gaik Yap.

Mohd Zaki said the defence failed to raised reasonable doubt in the case.

“I have no choice but to sentence you with the death penalty, the only punishment as stipulated in Section 302 of the Penal Code,” he said.

Alor Setar High Court held that the defendant Sha Lier today, 302 convicted under the provisions of the Penal Code, be sentenced to death by hanging.

9 years ago a sensation throughout the Peking University graduate Zhu Yuye were rape and murder case, Alor setar highgarden today accused Shahrir convicted to death by hanging. Defendant still has the chance to appeal.
Translated by Bing

The trial of Shahril Jaafar for the  murder of Chee Gaik Yap at the Alor Setar High Court is on December 28-31, 2014.

On Day 1: Shahril Jaafar, in his defence, claims that he paid Chee Gaik Yap RM350 for sex. When he left her, she was alive and well. He was shocked to discover 2 days later that she was dead.

A notice of appeal against the acquittal of car salesman Shahril Jaafar in a high-profile murder case has been filed in the High Court in Alor Setar, Kedah, by the Attorney-General’s Chambers (AGC).

The notice of appeal was filed amid alleged pressure from the family for the victim, Chee Gaik Yap, 25, following a signature campaign pressing for appeal following her rape and death.

Contacted today, the head of the appeal and trial division of the AGC, Nordin Hassan, confirmed with Malaysiakini that the notice of appeal has been filed.

“It was filed last Friday,” said Nordin, who had indicated early last week that the AGC was scrutinising the case and would make a decision on the matter soon.

Normally, the prosecution has 14 days to file a notice of appeal and it is given more time to state the grounds.

A total of 2058 signatures were collected during a signature campaign in Farlim, Penang to petition against the discharge and acquittal of a suspect involved in the rape and gruesome murder of the Chee Gaik Yap. Chee was abducted while jogging around her neighbourhood in Sungai Petani seven years ago. Shahril Jaafar, 32 walked free after the high court ruled, last Thursday, that the prosecution failed to prove aprima facie case. Shahril, a car salesman and the son of a VIP, had absconded to Perth in 2006 but was apprehended when he landed at the Sepang Airport in January 2012.

The signature drive at Farlim where the pictures were taken, is part of a nationwide effort to collect 50 thousand signatures addressed to the Kedah High Court, latest by tomorrow.

Nationwide signature campaign to petition against High Court’s acquittal and discharge of suspect.

Reeling in from the shock and anger over the prosecution team to provide a prima facie case against a rape and murder suspect, civil societies, state and national leaders all helped collect signatures and make police reports nationwide to urge the Attorney-General’s Chamber file an appeal in 14 days. Today is the eighth day.

A free man now, Shahril Jaafar was discharged and acquitted by the Alor Setar High Court last Thursday. Shahril had absconded to Perth in 2006 while out on bail during trial. He was only apprehended by the police when he landed at the Subang Airport in January 2012.

The verdict of Chee Gaik Yap’s rape-murder case intensified further the agony of the Chee family while sparking widespread public outcry in the society.

People saw the accused being acquitted and walking out of the coutroom a free man as the victim’s disheartened father attempted to throw himself out of the window.

The distress has transcended beyond the inflicted family to the entire community. Thousands offered the wreaths at murder scene on own initiatives, pursuing the lost justice at the same time.

The Chee family as well as the rest of us used to have high expectations for the verdict on this case, thinking that justice could be done through the country’s impartial judiciary. Unfortunately, a heinous crime now comes to a perfunctory conclusion following the exasperating verdict.

The suspect once went into hiding in Australia to evade investigations and the court ruled that the semen specimen did belong to him.

Why then wasn’t the suspect convicted even with the availability of material evidence (the semen)?

And why was he only charged for murder and not rape?

It would deal a severe blow to the country’s judiciary as well as justice if the perpetrator was allowed to walk freely owing to some human negligence.
…..

All that we can hope from Chee Gaik Yap’s rape-murder case is that the prosecution would not give up hope and justice could be done some day.

Another signature campaign in Penang for Chee Gaik Yap. pic.twitter.com/vwOOaZ3duX 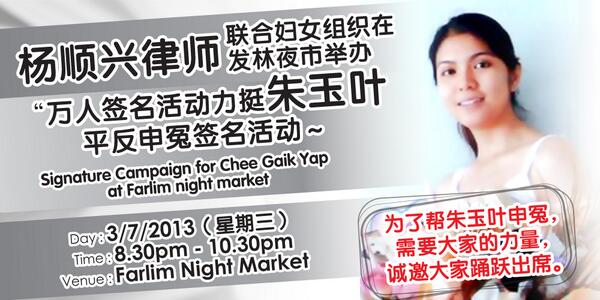 Datuk’s son rape case: Justice has not yet been granted

As for the highly concerned Chee Gaik Yap’s rape and murder case, judicial commissioner Datuk Mohd Zaki Abdul Wahab acquitted and discharged Shahril Jaafar from the charge of murdering Chee. In the judgement, Zaki said that the accused’s DNA and the semen stains taken from the victim’s private part did not match and the prosecution has failed to prove that Shahril had caused the injuries which caused Chee’s death.

Some lawyers questioned why the accused was charged only with murder but not also rape. Even if he was found not guilty of murder, he would still have to face the charge of rape.

Canny Ong was abducted from a shopping centre’s parking lot, raped and killed 10 years ago and the accused was charged with murder and rape. Today, the Attorney General’s Office still have the opportunity to correct the error.

From Chee Gaik Yap’s case, we can see that the judicial system needs to play its functions of maintaining laws and justice, and no mistake should be made. Every aspect of the system is interlinked and once there is an omission, all the efforts will be in vain.

If the authorities were able to prevent Shahril from fleeing abroad, the police might be able to collect more evidence at that time. Since the prosecution charged him only with murder, the court could only made the decision based on the trying principle of criminal cases.

In addition to professional competence, the judiciary must also possess a high degree of sense of justice and empathy. Take the Teoh Beng Hock case for instance, the Royal Royal Commission of Inquiry’s (RCI) report named three Malaysian Anti-Corruption Commission (MACC) who should be responsible for the death of Teoh, but no one has been charged. One of them has even been promoted to the post of Enforcement Agency Integrity Commission’s (EAIC) investigation officer.

The government should also focus on the impacts of prosecution losses on the efforts of curbing crimes. For example, the Pahang police has suffered a number of losses in drug crime cases due to technical problems. Could it be because the high number of crimes have resulted in exhaustion?

Do members of the judiciary have empathy for the heartbroken father of Chee Gaik Yap? Too many criminals have gone unpunished and thus, social grievances have been exacerbated. The problem is, when will justice be granted?

Datuk’s son rape case: Justice has not yet been granted

Followed by domycw and 8 others 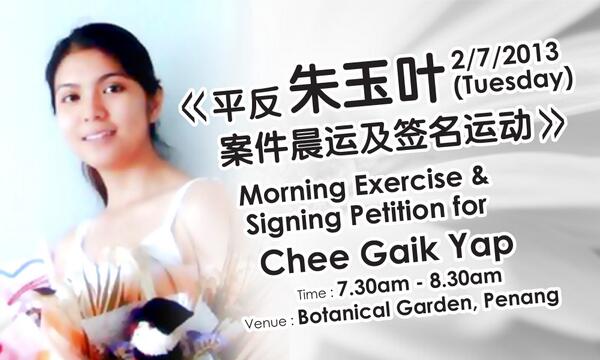 Followed by Latheefa Koya and 5 others 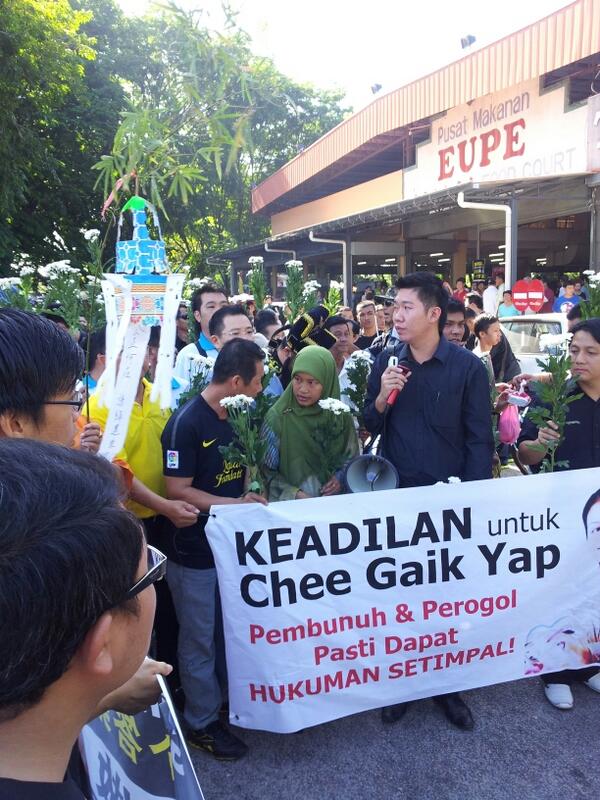 Parti Keadilan Rakyat
Justice for Chee Gaik Yap! We urge all Malaysians to heed our call for the “Lodge Nationwide Police Report, Justice For Chee Gaik Yap” campaign. We demand the police to reinvestigate the rape charges against the suspect. You can lodge the police report at any police station in Malaysia at any time without any deadline.

The investigators should use all legal avenues including the possibility of amending the charge from first degree murder to rape to ensure that justice was served, Tan stressed.

She was commenting on the incident where Gaik Yap’s father Chee Ah Sau had attempted to jump off from the upper floor of the Alor Setar High Court on Wednesday after the suspect in his deceased daughter’s case was set free due to lack of evidence.

Judicial Commissioner Zaki Abdul Wahab had ruled that there was no evidence to ascertain that the accused Shahril Jaafar, 32, had fatally stabbed his victim.

Tan said the police should pursue the rape angle now.

“The public feel that justice was not given to the victim’s family,” Tan told a press conference in front of the north-east district police station in Patani Road yesterday.

“As a State MCA Wanita chairman, I am very concerned that the police and the prosecution did not use a more holistic approach to handle such rape cases,” she said -thestar

3 Responses to Justice for Ms Chee Gaik Yap: Shahril Jaafar to hang for her murder…