Mahathir says TMJ is like a little boy, stupid because he doesn’t know anything… 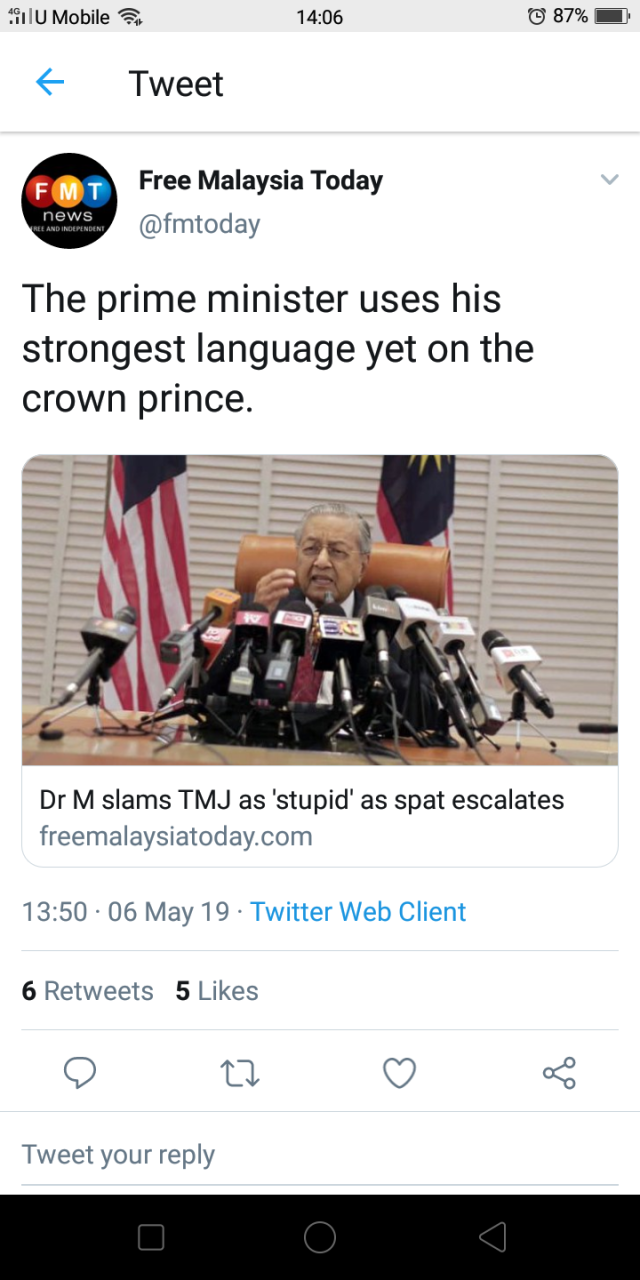 The prime minister uses his strongest language yet on the crown prince. https://t.co/NYwsoP9a60

PUTRAJAYA: Dr Mahathir Mohamad today used his strongest language yet on Tunku Ismail Sultan Ibrahim, calling the vocal Johor crown prince who is better known as TMJ as “stupid”, threatening to escalate a public spat between them.

“I don’t want to comment on the Sultan, because if I say anything, that is not good. It is not nice because he is the sultan,” he added.

Mahathir was posed a question relating to Tunku Ismail’s claim that many deeds by his father, Sultan Ibrahim Sultan Iskandar, have not been publicised.

TMJ had said that the Johor royal family has been a victim of character assassination and unfairly criticised over the Rapid Transit System (RTS) project.

On Saturday, TMJ listed contributions by the Johor sultan, including affordable housing projects on lands donated and developed by the Johor Sultan.

This followed Sultan Ibrahim’s statement that he was prepared to give up a plot of land under his name, which was to be used for the Rapid Transport System project linking Johor Bahru and Singapore.

Ties between Mahathir and the Johor palace have never been friendly since a constitutional amendment in the 1990s pushed by Mahathir to strip the rulers of their immunity from criminal prosecution.

But early this year, Mahathir met Sultan Ibrahim at Istana Bukit Serene, where the ruler made a rare gesture of hospitality by driving the 94-year-old to the airport in a first edition Proton Saga.

Tunku Ismail has been vocal against Mahathir even before the May elections last year.

Their spat took a turn for the worse in the aftermath of the resignation of the Johor menteri besar in March, over the powers of the palace in the appointment of the new MB.

A video clip of TMJ telling Johor football fans that it is better to replace the prime minister than the state coach recently went viral.

Mahathir then shot back, saying the position of crown prince is also not permanent.

“He (Tunku Ismail) thinks he is a big person (‘orang besar’) but he is not; he is a small person,” the prime minister said.

PUTRAJAYA, May 6 — Johor crown prince Tunku Ismail Ibrahim is a “little boy” and should not talk publicly about matters when he may not have full knowledge about them, Tun Dr Mahathir said in a media interview today.

The prime minister at first refused to comment on Johor’s Sultan Ibrahim Iskandar and the Malay Ruler’s relationship with the Pakatan Harapan state government, but did not hold his tongue when it comes to the prince known with the moniker TMJ, or Tengku Mahkota Johor.

“This TMJ is a little boy,” Dr Mahathir told the press in a group interview ahead of his government’s first-year anniversary on May 9.

“He is stupid, because he doesn’t know what is happening. So don’t talk when you don’t know anything. Don’t talk,” the PM said.