JMM’s Azwanddin “We will attack the Klang police station” Hamzah: Under arrest…

And did Azwanddin Hamzah have a great fall? 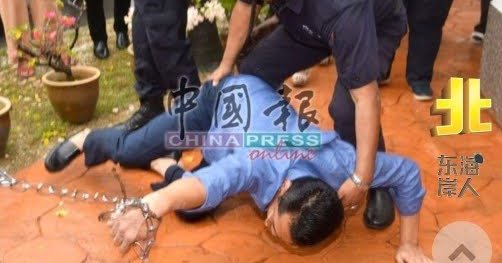 The leader of Malay right-wing group Jaringan Melayu Malaysia is being investigated for criminal intimidation. https://t.co/RpGCtE1o0r

Selangor CID confirms Azwanddin Hamzah was arrested today to assist in investigations into remarks he made at a Klang rally over the death of fireman Muhammad Adib Mohd Kassim. https://t.co/zNYvLh6t1u

PETALING JAYA: Police are investigating Datuk Azwanddin Hamzah Ariffin Abu Bakar for his speech at a rally on Tuesday (Dec 25) for criminal intimidation.

Azwanddin also urged the crowd to attack a police station if no action was taken over the murder of firefighter Muhammad Adib Mohd Kassim.

“Police have opened an investigation on him under Section 506 for criminal intimidation,” he told Malaysikini on Wednesday.

The rally, in Klang, where Azwanddin delivered his speech, was organised by Gerakan Rakyat Malaysia (Geras).
Read more at https://www.thestar.com.my/news/nation/2018/12/26/cops-probing-jmm-president-azwanddin-over-provocative-remark-at-klang-rally/#w8RGMIC1DmG703uV.99

Threatening to attack @PDRMsia station is clearly a CRIME so IGP @Fuzi_Harun should know what to do next! https://t.co/8xfmoqk6T7

PDRM should arrest and charge Azwanddin for threatening to attack police stations. This is a serious matter and should not go unpunished. We hope IGP TS Fuzi @Fuzi_Harun would not hesitate to arrest this rogue