Raja Petra Kamaruddin gets a visit from 40 Sikhs in yellow turbans in the UK. LOL.

Posted on September 28, 2018 by weehingthong

Blogger Raja Petra Kamaruddin has issued an apology to the Sikh community and Commercial Crime Investigation Department (CCID) chief
Amar Singh over his remarks about the latter’s turban.

“I was told a Sikh’s turban is a very sacred item and they do not take too kindly to anyone making fun of it. For that, I would like to sincerely apologise.

“I can argue that I did not consider my quip an insult to the Sikh faith or that this was not my intention. But it is not what I intended that matters but how what I said was received.

“And I also apologise to Amar Singh because, as much as I may disagree with him, that disagreement should not be reduced to the level of insulting his religion,” Raja Petra said in a posting on his blog today.
.

“These two, plus Manjeet Singh Dhillon and the late Karpal Singh, acted as my lawyers during my various trials and ISA detention ten years ago.

“They also helped me in other ways, which I am not at liberty to mention, and which helped me to settle down in the UK after I left Malaysia in February 2009.

“And they all did this without me asking (they volunteered their services), and without asking for a single sen in payment.

“I will be eternally grateful to Gobind, Amarjit, Manjeet and the late Karpal,” he said. 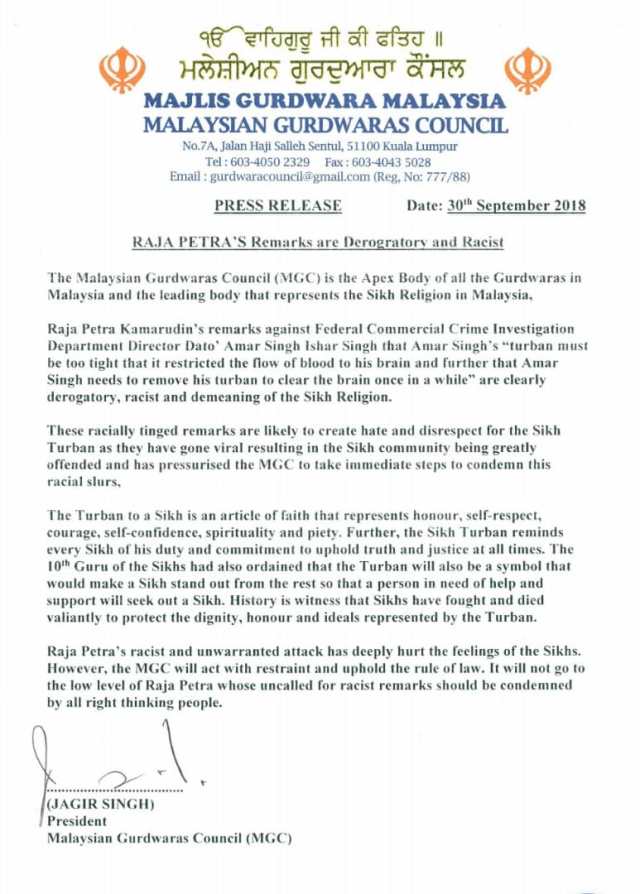 The blogger Raja Petra Kemarudin’s allegedly racist remarks about a senior police chief of Sikh descent’s use of a turban shows why the government must press ahead to introduce hate speech laws, said Communications and Multimedia Minister Gobind Singh Deo.

He said the blogger’s remarks is an uncalled-for attack against Commercial Crime Investigation Department (CCID) chief Amar Singh and the Sikh community.

“This is an example of why we need to push ahead for laws which regulate hate speech.

“These laws must also focus on more effective and efficient extra-territorial reach so as to facilitate the prosecution of persons who commit such offences from overseas here in Malaysia,” he said in a statement today.

Gobind, who is the first person of Sikh descent to become a Malaysian minister, said such attacks undermines Malaysians’ mutual respect for one another and must not go unnoticed.

Separately, the Malaysian Gurdwaras Council (MGC) – the umbrella body of Malaysian gurdwaras – said the remarks levelled against Amar would only serve to further stigmatise the usage of the turban, which is an integral part of the Sikh faith.
.

“Raja Petra’s remarks … that Amar’s ‘turban must be too tight that it restricted the flow of blood to his brain’, and further that Amar needs to ‘remove his turban to clear the brain once in a while’ are clearly derogatory, racist and demeaning of the Sikh religion.

“These racially-tinged remarks are likely to create hate and disrespect for the Sikh turban as they have gone viral, resulting in the Sikh community being greatly offended.

‘This has pressured the MGC to take immediate steps to condemn these racial slurs,” MGC president Jagir Singh said in a statement.

According to Jagir, the turban represents honour, self-respect, courage, spirituality and piety.

“Further, the turban reminds every Sikh of his duty and commitment to uphold truth and justice at all times.

“The 10th Guru of the Sikhs had also ordained that the turban will also be a symbol that would make a Sikh stand out from the rest, so that a person in need of help and support will seek out a Sikh,” he explained,

Amar himself called out the UK-based blogger for his remarks yesterday, stating: “The Sikhs hold the turban to very high regard, don’t ridicule and try to undermine us (sic)… We have a much stronger grit and courage in us.”

Many Rakyat Msia been challenging @RajaPetra to return to Malaysia.

DS Amar Singh dare him to return Malaysia and make a police report against @PDRMsia .

Let's see whether Raja Petra dare to return to Malaysia and make a police report.

Amar Singh says Najib Razak only came forward with a complaint after a news conference by the cops announcing the amount seized on May 25 and could not justify how there could be RM160mil – and not RM114mil as reported by police – at Pavilion residences. https://t.co/9L3nlzGBTY

Since the cash you confiscated was not counted in the presence of the apartment owner, and since the seizure list did not state the amount of cash being confiscated, and since the seizure list was not countersigned by the owner of the apartment, how can you prove you only seized RM116.7 and not RM160 million? Are you expecting us to take your word for it as an officer and a gentleman?

Amar Singh Ishar Singh’s turban must be too tight that it is restricting the flow of blood to his brain. Today he called me a mercenary writer. Everyone is a mercenary, Amar Singh included. We all work for money, every single human being in this world. Even Mother Teresa needed money, plenty of money, to do what she did.

This Amar Singh needs to remove his turban to clear his brain once in a while.

Isn’t Amar Singh earning a salary? Is he not being paid to do what he does? Will he continue to work in the police force if he is paid nothing, not a single cent? How can he afford to go to work, support his family, put a roof over their head, put food on the table, put clothes on their back, and much more, if he is working for free and does not get paid a salary?

Amar Singh is no Mother Teresa but just one more mercenary

So, Amar Singh, what does that make you? Mother Teresa or just another mercenary who will do anything your paymaster asks you to?

2 Responses to Raja Petra Kamaruddin gets a visit from 40 Sikhs in yellow turbans in the UK. LOL.