Our cops involved in the RM7.9 million robbery: Not for better but for worse…

Posted on September 27, 2018 by weehingthong

Seven police officers have been suspended over the alleged disappearance of RM7.9 million belonging to an investor, during a search at his condominium unit in Jalan U-Thant, Kuala Lumpur, on Sept 8.

The money allegedly went missing after the search was conducted at the condominium unit by police from the Narcotics Department of the Kuala Lumpur police contingent headquarters.

“The investigation papers have been completed and handed over to the public prosecutor’s office. We will wait for their directive before taking further action,” he told reporters after attending the “Integrity enhancing seminar: Corruption-free PDRM (Royal Malaysian Police) today.

One mistake was all it took. They disconnected all the CCTVs but not the basement CCTV which caught the raiders carrying away the loot. 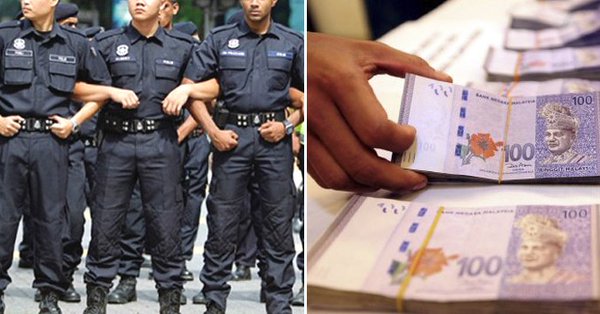 We thought this could only happen in a movie but oh, we were so wrong!

On 8 September, seven policemen comprising different ranks raided a businessman’s condo and blatantly stole RM7.9 million worth of cash from the premise. The incident happened in Lorong Ampang, Kuala Lumpur while the ‘Datuk’ owner was away in Indonesia.

According to NST, the raiding party consists of three senior police officers, four subordinates and a civilian. That night, it was an inspector from the narcotics division who led the raid, or should we say, the heist?

Police yet to recover RM2.3 million allegedly stolen by cops from condo unit in Jalan U-Thant

KUALA LUMPUR: Police are still trying to find RM2.3 million of the RM7.9 million said to have been taken by a group of police officers and men who raided a condominium in Jalan U-Thant on Sept 8.

It is understood that City police headquarters investigators probing the case have recovered RM4.2 million, while a further RM1.4 million of the total had been declared as money seized from the premises in the course of investigations into a drug-related case.

Sources said 20 people have been detained in relation to the case. Six of those detained are civilians, three are police officers and the rest are rank and file policemen.

One of the officers, a source said, was a woman holding the rank of assistant commissioner, while the other officers were a superintendent and an inspector.

However, 17 of the suspects have since been released on police bail, while the other three have been remanded to facilitate investigations.

“When police raided the condominium unit, the owner of the premises was in Jakarta. The owner only realised that RM7.9 million cash as well as several keys to luxury cars that he owned were missing when he returned and he lodged a report on Sept 10,” said the source.

The source said the raid was conducted by City police Narcotics Department personnel after one of the condominium unit owner’s employees was arrested and tested positive for drug abuse.

KUALA LUMPUR: Three senior police officers, four subordinates and a civilian have been arrested in connection with a RM7.9 million theft disguised as a drug bust at the home of a businessman-investor.

Some RM5 million is believed to have been recovered from the suspects.

Police seized more than RM3 million from an inspector, three rank-and-file personnel and a civilian.

It was learnt she was due to report for duty this week as senior assistant commissioner with the Commercial Crimes Investigation Department in Bukit Aman here.

A superintendent, also with the crime prevention unit, and a deputy superintendent (narcotics division) are believed to have handed over hundreds of thousands to investigators over the weekend.

The woman officer and the superintendent are on bail, while the others are in custody.

On Sept 8, a raiding party led by the inspector from the narcotics division is alleged to have faked a drugs test following the arrest of a woman and three men, all employees of the businessman.

They were said to be tested positive for methamphetamine when urine samples were taken.

The four were detained following the raid at a condominium belonging to the 50-year-old “Datuk” in Lorong Ampang.

The businessman was away in Indonesia when the raid took place.

He told police the raiding party took the car keys of his Bentley, Porsche Panamera, Porsche Macan and Ford Ranger.

1 Response to Our cops involved in the RM7.9 million robbery: Not for better but for worse…