The FACE of BN Propaganda against the Penang of PH: Back to obscurity…

Who is she?
If BN had won, she would have been celebrated but as it is, she has returned to obscurity…

Many accuse BN of being behind clip of woman complaining about life in Penang.

I wonder how much she gets for acting for this vedio? Remember, we have to be fully responsible for our own act and accept whatever return in fate that will come later. I am not from Penang but was there briefly recently. I can still enjoy a plate of noddle under RM5 in a most popular tourist spot! Can I get this in the KL? I think not even at the isolated spot! I learnt a wage earner of RM3500 a month cannot survive in KL. Whose cost of living is at skyhigh? I also learnt that the best place to retire is in PENANG!

Najib created “Penang, would you hear my story?” just to tukar the mindsets in Png? Hello sir? Are you still in ur own little wonderland? Real slaps will wake us up, not dream slaps duh. Fortunately for Najib, Penangist aren’t stupid. If not, Penang would’ve long been ruled by BN

YouTube: Penang, would you hear my story? Yes I have heard, all of your problems lie with your Government of Malaysia, not of a State. Water bill in Penang hasn’t increased yet, unfortunately. The video is so obvious dat Najib is very desperate to capture Penang with lies 🙂 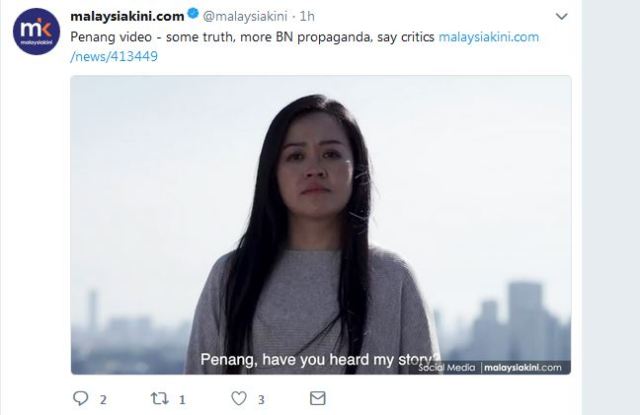 Debate on the viral anti-DAP government video titled “Penang, would you hear my story?”continues to rage, with civil society leaders saying that while the content has some truth, the clip is merely a BN propaganda tool, lacking in solutions.

In a nutshell, the 3.16 minute clip uploaded on Youtube and the Friends of BN Facebook, features an unnamed woman decrying her disillusionment with the Penang government due to the high cost of living, expensive homes, hikes in quit rent and water cost, poor economic state, decreasing jobs, illegal factories and land reclamation that purportedly caused 20 floods in 2017.
.

Popular blogger Anil Netto said while the mainstream media are accepting the video contents at face value, the storyboard bears all the hallmarks of sophisticated public relations and political strategy.

“The sort well-paid consultants could come up with,” said Netto in his blog.

He noted the premise of the video is “clever” as it starts off with a conveniently unnamed woman who claims to be a Bersih supporter, which most can identify with.

However, there was a major giveaway when the woman said it was the federal government who had “rescued” Penang from the major floods of last Nov 4 and 5, which displaced thousands and killed seven.

That’s an Umno narrative,” Netto pointed out, adding this appears to be the first salvo in the pre-GE social media propaganda war.
.
“Verdict: Slick production, raises some valid points, the anonymous source adds to the realism, but in the end, thinly disguised political agenda, doesn’t take a genius to figure out whose political interest it serves,” said the independent journalist.
.
Read more at https://www.malaysiakini.com/news/413449#SVghG6dTcxLHyKka.99 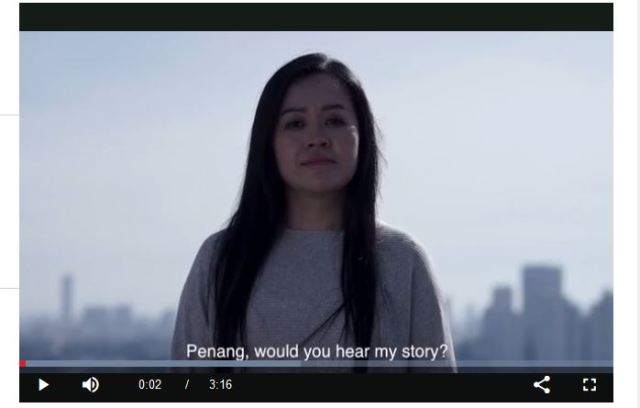 PETALING JAYA: A video about a woman’s emotional plea to the Penang government is making its round on social media.

The 3.16min video in Mandarin with English subtitles starts off with a woman in her late 20s asking: “Penang, would you hear my story?”

The woman, a senior executive, questioned whether she had made the right decision in voting for the Opposition during the last two general elections.

“I believed I was making a difference,” she says in the video.

“You ignored the mainland and focused mainly on the island,” she says, calling the state government unfair.

The woman adds that despite being in her late 20s, she is unable to provide for her mother and wonders whether it is her fault for not working hard enough.

Looking back at headlines of controversies in Penang over the past year, she asks herself what has gone wrong.

“Have I not voted? Did I make the wrong decision?” she says.

“You may think that the Penang people are well off, but the truth is most of us are not,” she says at the end of the video.

It is uncertain when the video was taken or who filmed it.