Federal Court: The syariah court in Sarawak has jurisdiction to hear apostasy cases…

KUCHING: The Federal Court has dismissed an appeal by four persons in Sarawak to have their apostasy cases heard in the civil court.

A five-member panel of judges chaired by Court of Appeal president Zulkefli Ahmad Makinudin unanimously ruled that the syariah court in Sarawak has jurisdiction to hear apostasy cases.

Other members of the panel were Chief Judge of Malaya Justice Ahmad Maarop and Justices Hasan Lah, Jeffrey Tan and Ramly Ali.
.

The hearing before the Federal Court is to hear only the question of jurisdiction and not a hearing of the merits of the Appellants’ Application For Judicial Review.

KUALA LUMPUR, Feb 26 — The Federal Court is scheduled to hear today the joint appeal of four Sarawakians who want to know if it is the civil or the state Shariah courts which can decide on their bid to convert out of Islam.

The hearing is part of the many years of waiting by the four who just want their identity card and official records to reflect the fact that they are now practising Christians.

Top court to hear who has power to decide 4 Sarawakians’ conversion out of Islam: civil or Shariah court? https://buff.ly/2EUF32O  The cases resulted from the insistence in Malaysia that others should convert into Islam when they marry Muslims. 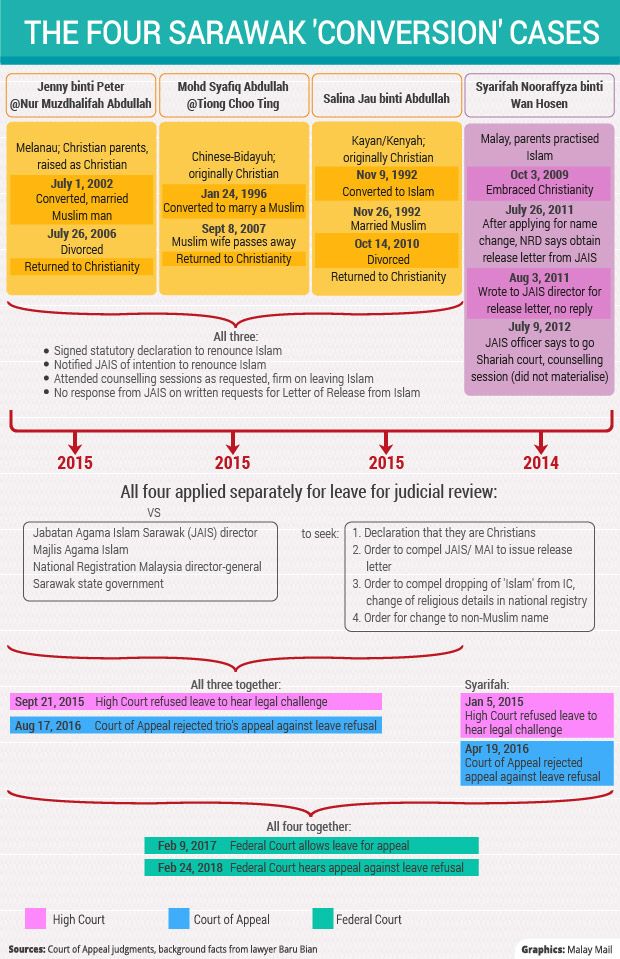 KUCHING: The Federal Court will hear the appeal of four persons who wish to have their conversion out of Islam legally recognised tomorrow.

They are Syarifah Nooraffyzza Wan Hosen – a Malay by ethnicity who left the religion of Islam voluntarily and embraced Christianity and Tiong Choo Ting – a Chinese-Bidayuh of mixed heritage and a Christian who converted to Islam to facilitate his marriage. He was given the Muslim name of Mohd Syafiq Abdullah.

The third person is Salina Jau – a Kayan/Kenyah by ethnicity and a Christian who converted to Islam to facilitate her marriage. She was given the Muslim name of Salina Jau Abdullah.

The fourth person is Jenny Peter – a Melanau by ethnicity and a Christian who converted to Islam to facilitate her marriage. She was given the Muslim name of Nur Muzdhalifah Abdullah.

Besides seeking for an order of ‘Mandamus’ to compel the Director of Department of Islamic Affairs Sarawak (JAIS)/or Majilis Agama Islam to issue the letter of release from the religion of Islam, the appellants are also seeking an order of ‘Mandamus’ to compel the The Director General of National Registration Malaysia to drop the appellants’ religion Islam in their identity cards and/or records and/or amend the particulars of the appellants’ religion held at the National Registry to that of Christianity.

Their applications were only at the leave stage and objections were raised by the counsels of all the respondents on the ground that the civil High Court has no jurisdiction or power to hear such an application, as the appellants’ application pertain to apostasy issue, which is under the jurisdiction of the Syariah Court, Sarawak.

“Letters from the Syariah Court, Kuching confirmed too that it has no power to deal with apostasy cases. Our argument is supported by one Federal Court case of Latifah bte Mat Zin v Rosmawati bte Sharibun & Anor [2007] 5 MLJ 101 and the dissenting judgment of the Chief Judge of Sabah and Sarawak in the Lina Joy lwn Majlis Agama Islam Wilayah Persekutuan dan lain-lain [2007] 4 MLJ 585,” Baru stated.

The case involving Syarifah Nooraffyzza was heard earlier before a High Court judge and the decision refusing leave was given on Jan 5, 2015.

The High Court judge agreed with the argument submitted by the respondents counsels, that is the civil High Court has no jurisdiction to hear apostasy case as decided in the four cases referred to above.

The other three cases involving Mohd Syafiq @ Tiong, Jenny @ Nur Muzdhalifah and Salina Jau were heard together and the decision of the High Court refusing leave was given on Sept 21, 2015.

The High Court judge agreed with the argument submitted by the respondents counsels, that is the civil High Court has no jurisdiction to hear apostasy cases as decided in the four cases referred above. All the Appellants appealed to the Court of Appeal.

The Court of Appeal in Mohd Syafiq @ Tiong, Jenny @ Nur Muzdhalifah and Salina Jau, which were heard together, gave their judgment on Aug 17, 2016. The Court of Appeal with a different panel agreed with the decision of the High Court, which was based on the four cases referred above. All the four Appellants appealed to the Federal Court.

Like Loading...
This entry was posted in Uncategorized and tagged 26 February 2018: Federal Court to decide on who has power to decide four Sarawakians’ conversion out of Islam.... Bookmark the permalink.

2 Responses to Federal Court: The syariah court in Sarawak has jurisdiction to hear apostasy cases…