Jamal Yunos, Fugitive, wants to be Boss of UMNO Youth… 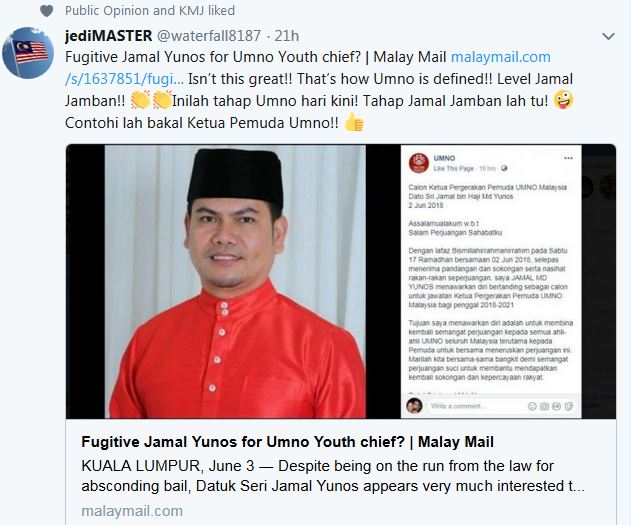 KUALA LUMPUR, June 3 ― Despite being on the run from the law for absconding bail, Datuk Seri Jamal Yunos appears very much interested to contest as Umno Youth chief.

A posting and an audio clip that is being shared widely on Facebook purports to be from the Sungai Besar Umno division chief throwing in his bid for the Malay party’s top Youth post as well as membership into its supreme council.

“The reason I am offering myself is to rebuild the fighting spirit in all Umno members throughout Malaysia, especially for the youths, to jointly continue the fight,” according to the statement attributed to Jamal.

Malay Mail attempted to contact Jamal but has yet to receive any response.

PETALING JAYA: Fugitive Jamal Yunos has joined the race to be Umno Youth chief. He has announced on Facebook that he is contesting the top post in the June 23 party polls.

“My intention is to rebuild the fighting spirit among Umno members nationwide, especially among the youth,” said the 48-year-old fugitive.

“Let’s rise for the spirit of sacred struggle to help (the party), so it can once again enjoy the support and trust from the rakyat.” 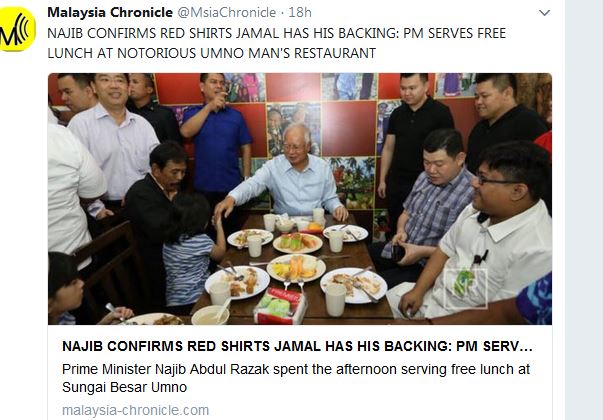 Is he looking for more recruits for his Red-Shirt demonstrations?

PETALING JAYA: Two former ministers have welcomed Sungai Besar Umno division chief Jamal Yunos’ offer to lead Umno Youth, saying it was time the wing was led by someone who understood the grassroots.

Former minister Sanusi Junid said he was not surprised by Jamal’s recent announcement expressing his interest for the post of Umno Youth leader.

“It starts from the top. If Najib can be president of Umno, it is not surprising that anyone else will harbour such an ambition.

“Jamal could be one of them,” said Sanusi, who quickly added that he was no longer interested in Umno’s affairs.

Umno Sungai Besar chief Jamal Md Yunos today said he has the right to nominate himself to compete for the Umno Youth chief’s position and replace Khairy Jamaluddin.
.
“I will show my profile to all, there,” he said.

Earlier, Jamal, who is notorious for his outrageous stunts against the Selangor state government, “took” opposition leader Dr Wan Azizah Wan Ismail – or rather a cut-out of her, for a ride on the MRT, from the Kajang stadium station to the Sungai Buloh terminal.

PM has better things to do, Umno leaders tell Mahathir

ETALING JAYA: Unlike Dr Mahathir Mohamad, whose only task is to take down the Barisan Nasional (BN) government, Prime Minister Najib Razak is responsible for the development of the country and the welfare of its people, says Sungai Besar Umno division chief Jamal Md Yunos.

Hence, he said there was no need for Najib to “waste his time” by attending Mahathir’s “Nothing to Hide” forum.

“I want to inform him that what’s more important to Najib is his focus on developing the country. His responsibility as the prime minister does not include entertaining irrelevant matters.

“Besides, he has already addressed the (United States) Department of Justice (DoJ) lawsuits and the RM2.6 billion issue.

“These people, no matter what the explanation given, no matter what evidence is put forward, they will not be satisfied as long as Najib is not taken down,” he told FMT.

He said if Najib was a man with Mahathir’s character, the Pakatan Harapan chairman would now be behind bars for attempting to topple a democratically elected government.

It was a clear breach of the law, he said.

“But because Najib is a gentle, kind, and well-mannered man, he just ignored Mahathir.”

According to Jamal, who recently announced his intention to contest for the post of Umno Youth chief, those who planned to attend the forum were “mental”.

“Their brain is unwell, for trying to change a good government to one which is uncertain in its capability.”

PPBM deputy president says Jamal Yunos’ decision to contest for the post indicates the departure of intellectuals and professionals from Umno Youth.

“It’s a great idea. I would support it 100% if I was still in Umno,” Mukhriz, who had contested the post in 2009, told FMT at the Kuala Lumpur High Court here.

The former Kedah menteri besar, however, felt that Jamal’s decision to offer himself as a candidate also indicated the direction in which Umno Youth was heading. It showed the inability of the movement to attract intellectuals or those concerned with the country’s future, he said.

“On the other hand, PPBM is attracting intellectuals and professionals and doing so in big numbers.

“So, I suppose, there’s no one left in Umno Youth,” he said, seeming to suggest that many PPBM members had come from Umno.

Nazri: Jamal a good candidate for next Umno Youth chief

This is so if incumbent Umno Youth chief Khairy Jamaluddin has no intention of retaining his post in the next party elections.

“Why not? If Khairy does not accept his post as youth chief (in the next Umno polls), then Jamal can go (for the post). What’s the problem? I think he is a good candidate.

“If he comes to see me, I will support him. But, he hasn’t come to see me. That’s his right,” he said at a press conference in Kuala Lumpur today. 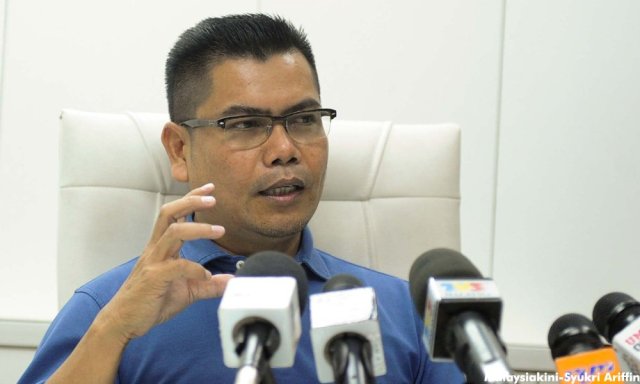 Sungai Besar Umno chief Jamal Md Yunos has expressed his desire to contest for the party’s Youth chief post to replace incumbent Khairy Jamaluddin after the next general election.

According to the vocal politician, this might be an option if there is no seat for him to contest in the coming general election.

“If there is no place (to contest) in Sungai Besar, the division chief (Jamal) wants to contest for the Umno Youth chief post,” he was quoted as saying by Sinar Harian today. 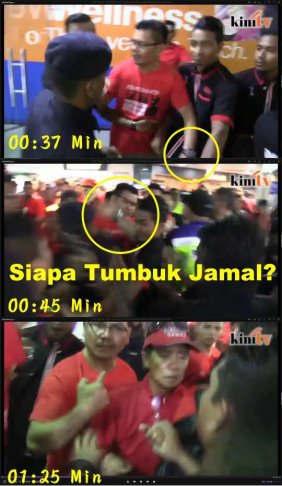 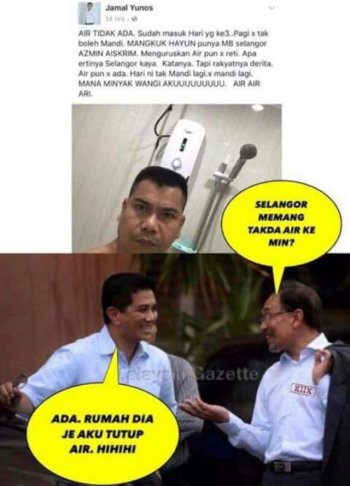 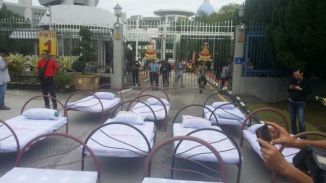 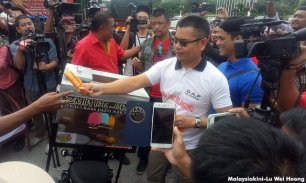 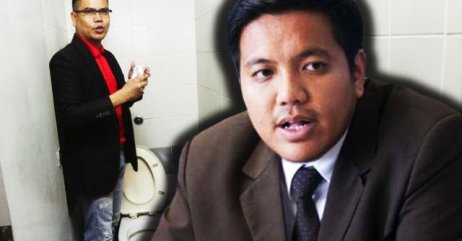 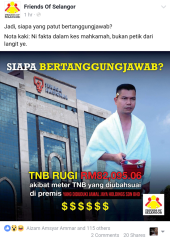 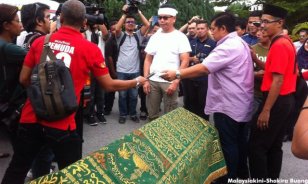 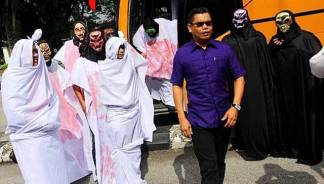 Like Loading...
This entry was posted in Uncategorized and tagged jamal yunos, umno youth chairman. Bookmark the permalink.