MAS survived 2 crashes and near-bankruptcy. Now, do they want to kill it off for good?

MAS: The only thing we are good at is ‘sleeping on the job’ and the bl**dy foreigner has to criticize us for it!

While profitability is a priority, former MAS CEO says it is not the No. 1 priority in a government business, as opposed to performing a service to the community and creating jobs for locals. 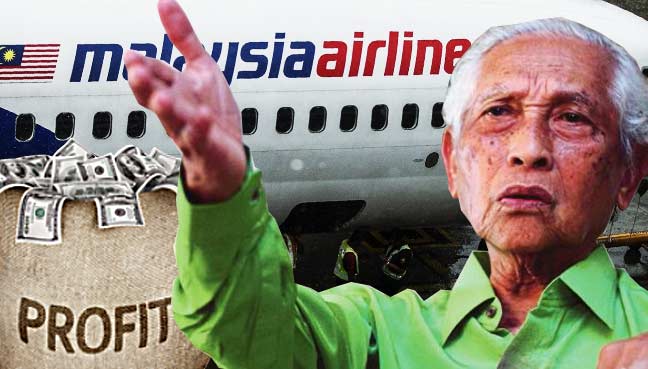 “These things can be put in many forms … I want to see, where do they put Malaysia Airlines’ liability of RM12 billion and the expenditure for the staff retrenchment package?

“We want to see all of these first.

“The public has the right because public funds are involved,” he told a press conference here.

Abdul Aziz was referring to reports saying that Malaysia Airlines recorded an improved revenue for the first quarter of this year on the back of low jet fuel prices.

While profitability is a priority, he said, it was not number one in the government business as opposed to performing a service to the community and creating job opportunities for the locals.
…

The MPM said the retrenchment of 6,000 jobs, as part of the airline’s turnaround plan, was a waste considering the government had invested heavily in the local talent pool.

Abdul Aziz said the airline had been doing badly over the last 15 years and the government should establish a commission of inquiry to identify the responsible party for the losses.

This way, he said, the committee could come up with proper recommendations and should there be any act of mismanagement, the guilty party must be punished.

Abdul Aziz, a lawyer by profession, was appointed managing director and chief executive officer of Malaysia Airlines in 1982. When he retired in 1991, he left the company with RM5 billion in cash reserves.

Group CEO Christoph Mueller confident airline is on track to return to profitability by 2018.

PETALING JAYA: Malaysia Airlines Bhd has posted a profit in February, it was reported today.

This is its maiden positive monthly result and its Group Chief Executive Officer Christoph Mueller is confident it is on track to return to full profitability by 2018.

“For a company that lost RM2 billion just last year, if you are able to break even for a month or so, it means the financial gap between revenue and cost has significantly closed, and that is good news that tells us that we are on the right trajectory,” he said in an interview with AP.

“Malaysia Airlines has been operating for six months now and although we have a long way to go and areas for improvement, we are making steady progress in the restructuring.”

The carrier said revenue per available seat kilometre for the quarter improved 10% year-on-year on the back of the route optimisation exercise conducted earlier.

German-born Mueller is the first non-Malaysian at the helm of the national carrier.

Like Loading...
This entry was posted in Uncategorized and tagged fighting over MAS, malaysia, malaysia airlines, MAS, MAS staff sleeping on the job, mueller resigns. Bookmark the permalink.

1 Response to MAS survived 2 crashes and near-bankruptcy. Now, do they want to kill it off for good?