THE SINGER WHO EXPOSED HIS/HER BREASTS IS A TRANSVESTITE.

THE MALAY WORD IS PONDAN.

(1) Transvestites/pondans are boys/men who want to be girls/women. They are not transgenders but transsexuals.

(2) The person looks like a woman and acts like a woman but while the upper body is female (big breasts), the person still has the lower body of a man. Yes, he has a penis.

THE THAIS CALL THEM LADYBOYS.

Born male but wanting badly to be female, a ladyboy identifies himself as a woman.

A ladyboy will have a male sexual organ!

The face and top half of the body are those of a female but the lower half is that of a male. To put it bluntly, a ladyboy has a penis!

(3) If a transsexual/pondan has undergone surgery, the person is a transgender: from male to female, or from female to male.

A man, wanted by the police for questioning for allegedly dressing in an indecent woman’s attire at a performance by buskers in a shopping centre here last Saturday, surrendered himself at the Karamunsing police station in Kota Kinabalu today.

Kota Kinabalu City police chief M Chandra said the 24-year-old suspect, who was accompanied by his father, came to the station at about 4.30 pm.

“The suspect was detained and police then recorded his statement before releasing him on police bail,” he said in a statement here.

Chandra said investigation found that the suspect was not a member of the busking group.

“He sung there without any invitation and did not receive any payment for his performance; he was just singing for fun,’ he added.

Greetings here I beg sorry spuluhjari dai all parties d for me actually accidentally i only mnghiburkan people besides I tried to help the group to the busker mngutip sumbagan santai2 can say and I want to make me not menayang or ” Peacekeeper Pyudara me in public But Mike is too low and hard on the correct and accidentally ahkirnya my pyudara tkluar you can see yourself d youtube where I own my clothes memperbtulkan x bersutuju there’s some parties who try mnjatuhkan me and my family image burning to write the facts x right to be perfesional I’ll meet the authorities to make the actual explanation and I memnta sorry is more to the hate and insult or revenge to me don’t la make viralkn I apologize to all parties, over and out. S 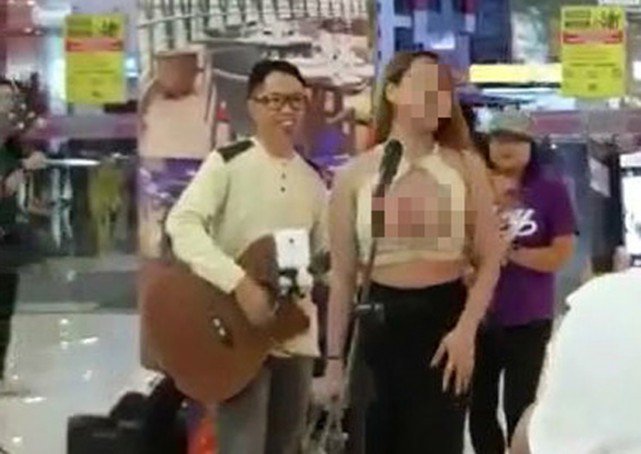 KOTA KINABALU, Malaysia – A transsexual who was caught showing her breast while singing at a mall here said in a Facebook post that the wardrobe malfunction was unintentional.

The transsexual, who posted an apology on an account with the user name Papai CiEcie (Puteri Cici Cutez) on Friday said her breast was accidentally exposed when she bent down towards the microphone.

She urged people not to spread the video and assured that she was going to meet the police as the case is currently being investigated, adding that she decided to sing to entertain the crowd and help the buskers raise money. 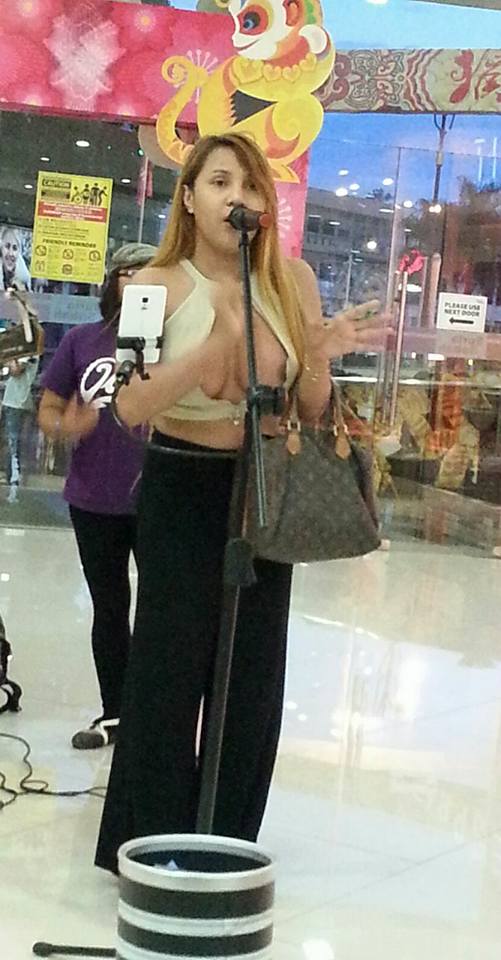 KOTA KINABALU: An individual, believed to be a transvestite, stole the limelight of a busking band at the Suria Sabah shopping mall for all the wrong reasons after a video clip of her performance went viral on social media.Singing Jason Mraz’s “I’m Yours”, the attention given was obviously not towards her singing skills but were drawn towards her choice of wardrobe; wearing a tight fitting top with a loose opening on the front, the singer’s breasts were visibly noticeable throughout the video, although she was obviously seen struggling to tuck them in.

The individual was initially mistaken to be part of the band, although she was seen still holding on to her handbag while singing.

KOTA KINABALU: A singer believed to be a transvestite made heads turn at the Suria Sabah shopping mall here when patrons saw more than what they bargained for.
…
A video clip of the performer singing “I’m Yours” by Jason Mraz with a loose blouse that exposed the person’s ‘upper torso’ has caught the attention of many on social media since yesterday.
…
The individual, who had a handbag slung on the arm, was seen singing live with a band of buskers as amused patrons took videos and photographs with their mobile phones.
…
In its Facebook page, Suria Sabah clarified the individual was not part of the band and was not authorised to perform.
…
The mall management also apologised at being unable to stop the indecency.
…
The management also expressed their regret over what had transpired and disappointment that the “performer” took advantage by “popping” in with the indecent attire.
…
“Our management strictly does not support or endorse such indecent acts and exhibition.
…
“We will take appropriate action to prevent such groups of people with or without motive and intentions from disturbing the mall from now and onwards,” the management added in the statement.

Dear shoppers, tenants, members of the public, friends and family.

With regards to a recent video/ photo posting on the social media, and the reporting on Daily Express today (21 Jan 2016), the management of Suria Sabah wish to clarify as below:

Fyi, the lady in the photo/video is not part of the performing band and without our authorisation. The actual band which consists of a family of a father, his 2 sons and the father’s brother only, is a local band endorsed by the Board of Cultural Arts of Sabah (Lembaga Kebudayaan Negari Sabah, LKNS). LKNS wrote in officially to our management to request permission and support to their cause by allowing their endorsed artistes to perform in Suria Sabah to promote performing arts, music and local performing talents (please see attached official letter from LKNS). So with sincere good intention from our side to support and promote local performing arts talents and working closely with the authorities for a better Sabah, we consented and supported LKNS’ request.

The family have performed many times in our mall throughout Christmas without incidents. Indeed they have been very well received from the shoppers and tourists. It is very very sad that the lady in the photo/video took advantage of the circumstances and popped in with such indecent attire and exhibition, and created a negative image for the mall, the performing band, and LKNS. Supposed such indecent attire and exhibition is not allowed under Malaysian law & custom. To a sound mind, an average and normal shopper will not dress in such indecent manner in public and it does invite questions about the motive and intention of such indecent act by this lady.

Our management strictly do not support or endorse such indecent act and exhibition.

We will take appropriate actions to prevent such group of people with or without motive and intentions from disturbing the mall from now and onwards.

We have floor team rounding the mall throughout the day to ensure smooth operation of the mall. However it is with very much regret that some how this lady is very quick to take advantage of the situation for her purposes. It is within 4 minutes that the act is accomplished and then proceeded to leave the mall. Due to the fact that this family band has been performing many times without incidents in the mall and she took advantage of the situation within less than 4 minutes, our floor staff did not manage to immediately stop the indecent exhibition. We sincerely aplogise and very much regret that we have been taken advantage of within this 4 minutes, and inadvertently allowed this lady to cause inconveniences to our shoppers, tenants, members of the public, friends and family.

On behalf of our management, please accept our deepest apologies over this incident. We will do our best to improve and do our best to prevent such similar situation to repeat in our mall and disturb the mall from now and onwards.

Thank you very much for your sharing your concerns and thoughts with us, and your continued support extended to us. We ensure that we will continue to do our best to serve you better.

With much thanks and best regards.